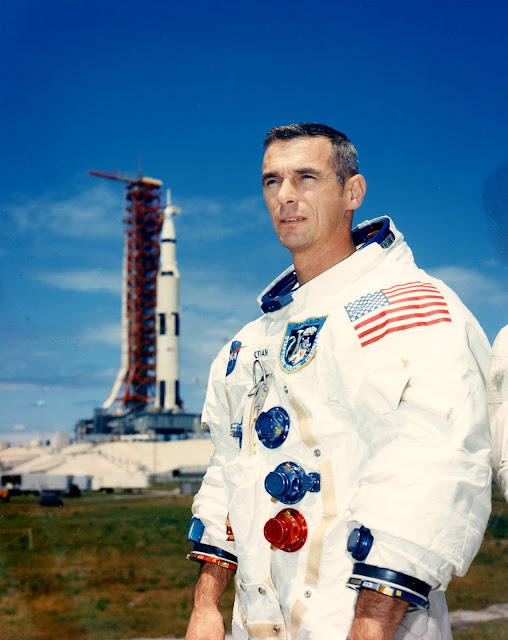 Eugene "Gene" Cernan has passed at the age of 82.

His early career included time as a Naval Aviator, and he earned degrees as an undergraduate from Purdue and a Masters in Aeronautical Engineering from the Naval Postgraduate School.

An astronaut of the Gemini and Apollo era, Cernan was pilot of Apollo 10 and Commander of Apollo 17.  As was widely remarked in the press today, Cernan was the last human to have stepped foot on the lunar surface.

Cernan also pulled the "Snoopy" landing module out of a deadly spin during the Apollo 10 descent - which was never intended to land, just see how all that would work on Apollo 11 when someone finally did touch down.

Somehow Cernan's name has been better known than many other astronauts, at least in my mind, and that may be due to his continuing participation and advocacy for the space program and his frequent appearances on television.

Buddy JuanD has alerted me to a documentary about Cernan, Last Man on the Moon, which we hope to watch very soon.