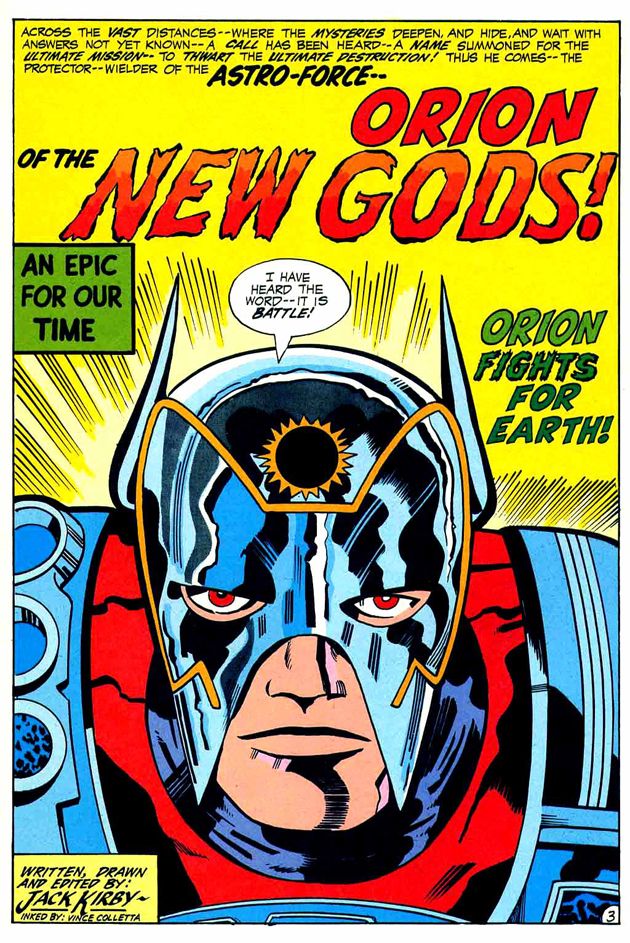 
Despite the fact I enjoyed several Jack Kirby creations, it took me a while to figure out that Kirby was the guy from whom so many of my favorite characters had sprung.  At some point in college, though, I stumbled across some cheap black and white reprints (a predecessor to the Showcase Presents collections, which I am still mad they discontinued) of Mister Miracle, New Gods and The Forever People.

It's fair to say that reading those comics was as much a life-changer for me as reading any other book or discovering any particular movie.  It cracked the DC Universe open wide for me in a way I've been chasing since, gave me not just characters to love, but near totemic emblems, and a great unfinished work I'll always be able to enjoy as long as DC likes making money.

I've recently been re-reading the paperback collection of Mister Miracle that was released in 2017, and the funny thing is, just yesterday I was thinking "this would be incredible as a movie".  This is at least my fourth time re-reading all of Mister Miracle, and every time it doesn't just feel fresh, it feels revelatory.  This is the kind of storytelling TV wouldn't figure out til 2007 or so.  Movies have barely sorted out.  And it didn't just spring from Kirby's pen, he did it four times a month as he rolled out an entire mythology with the debut of The Fourth World stuff back in '71.

There are themes macro and microcosmic, those same family issues that give you some insight into the scope and scale of Star Wars are present here, as well - if the angle on what "cosmic" means is a lot different.  It's a grand opera set in transdimensional space!  Planet embodying good (but maybe not as good as they like to think) in eternal conflict with evil (but with pockets of hope, of resistance, of people finding love and   What's not to like?

Every character may be over the top, amped to 11, but when they're all like that, it's just how things work in Supertown.  And while I've never stopped being amazed at what corners of the Marvel U we've seen on screens big and small since Iron Man blew up how entertainment works, I figured if we ever got any DC Kirby stuff, it'd be shown the way it did in the lackluster spectacle that was the post Lord of the Rings CGI goofiness that was Steppenwolf in last year's Justice League film.  We'd get a taste and fans would know what was behind it, but non-comics-nerd audiences would sort of shrug at the generic bad-guy.

Marvel may have the radness that is Thanos, but they don't have the epic that is The Fourth World, so I can't slow clap enough to hear they've handed acclaimed director Ava Duvernay the reigns for a New Gods picture.  I'm not sure if she's handling literally just that sliver of the story with Orion and Lightray jumping back and forth between New Genesis and Metropolis - which is more than enough, by the way - or if she's going to go full bore Fourth World.

I just hope she retains the Kirby look and feel, the bombastic operatic nature of the dialog, and gets some great talent into the tights.

And, kids, I like Tom King and Mitch Gerads Mister Miracle run, too, but... now is a very good time to get familiar with New Gods, Mister Miracle, the Forever People and even a very certain run of Superman's Pal, Jimmy Olsen.
Posted by The League at 3/15/2018 11:24:00 PM