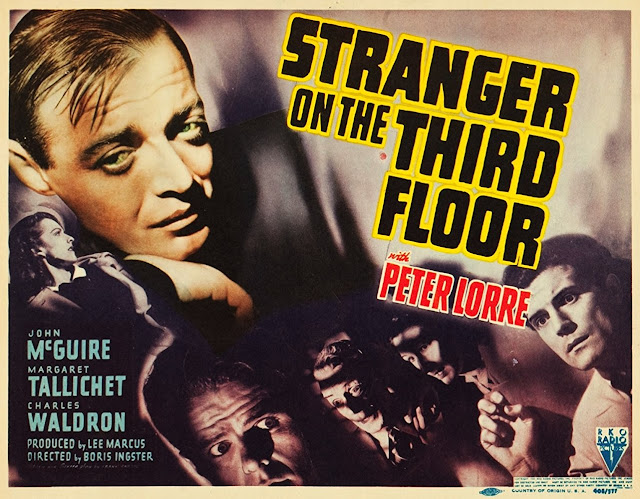 
During last weekend's Noir Alley edition, Eddie Muller pitched the notion that Stranger on the Third Floor (1940) may be the first film to reflect the un-genre of film we call noir.  I am not even going to try to debate that one, and now accept it as fact, if that's what Eddie says.

These days I let it slide off my back when I see the term "noir" tossed around, because the popular notion of what that looks like gets pigeonholed and basically boils down to Sam Spade in his office, Mary Astor walking in.  But The Maltese Falcon would be 1941, a year after Stranger on the Third Floor appeared - and, frankly, the Venetian blinds bit behind the detective and the sleek, dangerous woman in a mink coat are pretty singular and a tiny fraction of what we can call noir.  The only detectives in this movie are cops looking for easy answers.  The only dame the level-headed, spirited girlfriend who wants to see justice prevail.

Still, watching Stranger on the Third Floor, it presages so much of what would be recognizable in the genre, right here in a B-lister picture that may look more like the public imagination's cartoony idea of a noir film than most anything else I can name.  But, honestly, not just in a good way, but in an incredible way.

Our story begins as a reporter has just received a raise for a big break/ scoop.  Prior to the movie beginning, he had stumbled across a murder near his apartment, spotted the suspect, and was able to report and play key witness as well as write up an eyewitness account.  Attending the trial, his fiancee questions what really happened, and as their happiness hinges on the conviction of someone she isn't sure is guilty (and because he's Elisha Cook Jr., he is convicted), she flees.

Our reporter heads home late after the trial, now worried he was wrong.  He meets Peter Lorre being Peter Lorre (and therefore creepy and suspicious), and then sees Lorre exit the apartment of his pain-in-the-ass neighbor who has no friends and therefore no guests, especially like Peter Lorre.  Our reporter has had run-ins with the neighbor, and begins to worry - if the neighbor is also murdered, what if they point the finger at him?  Moreover, what if he was wrong about Elisha Cook Jr.?

While most of the performances are stock RKO B-Unit performances, it's interesting to see Lorre and Cook at this point, a year before they'd wind up together in The Maltese Falcon.  Lorre is already great and Cook has perfected the "I'm so freaked out my eyes will explode" thing that would become his trademark.

The film contains some terrific cinematography, leaning heavily on what we called German Expressionism in film school.    Here, before the genre even really exists, we get imagery that people would immediately identify as noir, but in a hyper-stylized manner. 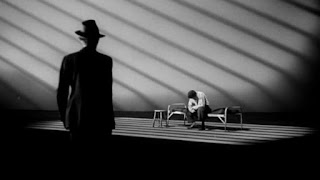 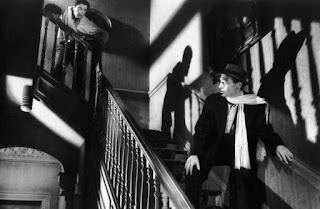 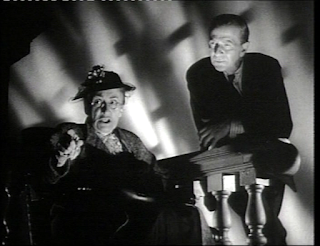 Some of it is dream sequence, some of it is just the lighting scheme and camera positioning of the film.  Credit to Cinematographer Nicholas Musaraca and Art Director Van Nest Polglase.  Hats off to the merging of the sort of off-kilter visions of the Expressionist movement and American Cinema style to suggest something new.

Hitchcock will always get credit for Spellbound's terrific use of Salvador Dali's genius brought to the screen, but it's worth looking at how this movie handles a different idea for a dream sequence that unlocks the character's psyche and pushes the story forward.

What's curious is that the movie is incredibly dark, and maybe iffy on mankind's better angels while also firmly believing in the system of laws and due-process, and that if we didn't make assumptions and basically take the easy way out, the system is there to make sure we get a fair shake.  On people, though, the movie is maybe not so hot.