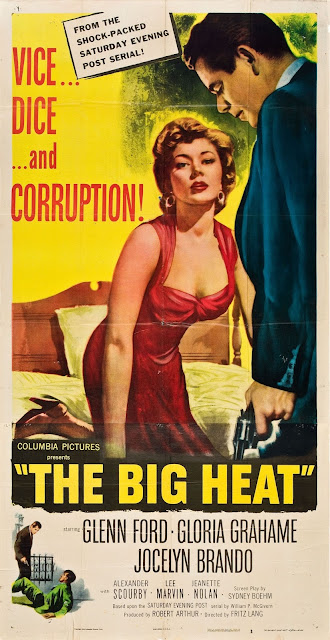 
(late edit:  for the prior times I wrote on this movie one, two, three and a few mentions here and there)

The Big Heat (1953) starts deceptively like a lot of cop or noir films of the era.  But, man, does the movie get dark fast.  In a genre full of crime, murder, human frailty and faults, and people generally showing their worst sides, there's still some fresh angles in this movie, and some hard-bitten cynicism that even the "law and order shall prevail" ending dictated by the Hayes Code can't wash away the prior 90 minutes.

Credit to director Fritz Lang (not that Lang had anything to prove by 1953) who knows how to put a movie together.  From staging of scenes to performances and collaboration with cinematographer Charles Lang (no relation), the movie simply works - pushing from one scene to the next, upping stakes in surprising turns.  The movie is based on a Saturday Evening Post serial by William P. McGivern and adapted by Sydney Boehm.

Starring Glenn Ford, Gloria Grahame and a new guy on the scene, Lee Marvin, the movie follows a good cop in a bad town who, while looking into the suicide of a city official, begins to uncover corruption and is asked to look away.  When a barroom girl tied to the suicide winds up dead, he ignores the advice of his bosses and digs in.  And the mob pushes back.

I don't know that this movie skews heavily female, but there are four key roles played by women, one of which is practically a walk-on, but turns all of the subsequent events.  Dorothy Green plays Lucy Chapman in the kind of role we can usually code as "hooker" in noir, Jocelyn Brando plays Bannion's wife with a pretty terrific energy, and Jeanette Nolan plays the crafty widow of the dead city official (and she's great).  We'll get to Grahame in a moment.

A lot of the plot lays out the template for the rogue-cop-in-search-of-revenge stuff that would become the antihero stuff of the 1980s, complete with cops putting their badges on the Commissioner's desk and telling everyone to go to hell.  But that sort of thing was a lot less common in 1953, and it's honestly rarely been done better than here.  The impact of a clearly clean as a whistle cop pushing back and going rogue has a lot more impact when it's this fresh and with this much earned rage.

If a lot of noir leans on the honest guy who gets in over his head because of a dame and the implied quality of implied sex, and following that to the end of the line - The Big Heat treats Dave Bannion's (Glenn Ford) need for justice/ let's admit it's revenge in much the same way.  Ford's got no lack of intensity in the role, and you can feel him seething in every frame.  Pushed up against it, though, he's still Dave Bannion at his core, and that struggle is more than interesting to watch.

But you can't talk about this film without talking about Gloria Grahame and Lee Marvin.  Marvin plays the lead thug/ lieutenant for the local shady political boss, and he may not have a head for playing nice in society, but he's a shark of a human.  Grahame plays Debbie, his girl, enjoying the perks of shacking up with a high rolling crook, looking the other way in favor of the mink coats, quality booze and good vacations.  Debbie may be smarter than she wants to be, and she certainly can't quite stop needling Vic, enjoying seeing the guy get knocked off his pedestal once in a while.

During the Noir Alley segment, Eddie Muller talked about how you can't talk about the movie and not mention the coffee sequence, and I'm not sure I've let spill the beans on that bit before.  I tend to avoid mentioning bits of movies that rely on surprise, and this movie has at least three times, maybe four, I could mention that were "holy cats" moments.

You do have to start by acknowledging that Gloria Grahame is an attractive woman, and her character is getting by on those good looks and certain playful sexuality.  She can get away with the teasing of her boyfriend she surely knows has put a few people in the river by treating all of that jabbing as foreplay.  But when Vic Stone (Marvin) thinks she's both gone to bed with Bannion and given him information, he tosses a pot of hot coffee on her face.

The pain is understandable, the long sequence which follows as Vic figures on getting her out of the apartment, including his witnesses in clearing her out as she writes in agony in unsettling - but that's a scarring injury.  And Grahame plays the rest of the movie from behind a half a face swathed in bandages, whatever she had to trade on now gone.  For the first time, she also considers and empathizes with one of Stone's victims, and that leads to the third, perfectly executed surprise sequence in which a mink-coated, bandaged Grahame calls the bluff of the widow, who has been holding information that will be released in case of her death, putting a few slugs in her.  Not an heroic act, but one of atonement, maybe.

If the actions of Vic Stone in the film seem a bit on the dark side, it gives you an idea of what the movie is trying to suggest: that the square, clean-cut world we think our cities sit on works in a fair and democratic way with a certain set of rules, there's an entire underworld pulling the levers.  Those powers rely on greed and cowardice and a lack of empathy, and in most ways, those powers aren't really wrong.

Yeah, it's a Hayes Code law and order movie, and so the world is turning correctly at the end of the movie, but there's only punishment for those who got caught.  Bannion got his revenge, and he didn't do it by sticking by the book.

I was thrilled to see Eddie get to open and close this film, which I've only watched by myself on DVD.  I expect this is considered a top tier entry in the noir canon by a lot of noir buffs.  If it suffers at all, it's in that many of the themes and plotpoints of the film have been so borrowed and recycled since that, whether this was the ur-cop-on-a-revenge-kick film or not, it's certainly an early entry for one of the best.