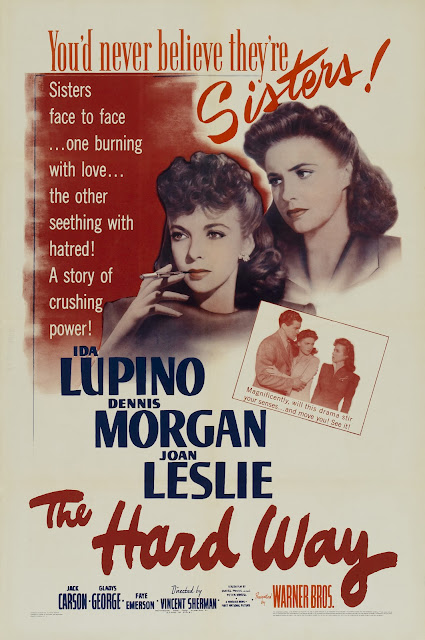 The Hard Way (1943) is a wartime melodrama and probably counts as a "Women's Picture", which was a thing, as it starred women, had them front and center as career-centered ladies with romance as a conflict.

It's not a genre with which I have a lot of experience, and I'm not a huge follower of soapy melodrama.  "So, The League," you say, "Why did you watch it?"


Because we find Ida Lupino appealing, and she was in it, and once we started watching it, we wanted to see what happens.  Which I think is probably a nod that The Hard Way isn't all bad.  I won't argue it's must-see cinema, but it had enough in the way of twists and character arcs and Ida Lupino that we kept watching.

Lupino and Joan Leslie star as a pair of sisters in a Pennsylvania factory town who meet a pair of Vaudevillian performers, Collins and Runkel, who take a shine to Joan Leslie, a spunky girl just out of high school.  Runkel takes a particular romantic interest in her, and Lupino sees a way out of this dead-end life and town.

I won't get into the twists and turns, but basically Lupino stage-moms her sister into becoming a star on Broadway - but is that what anyone wanted?  Probably not, because the movie actually opens with Lupino tossing herself in the Hudson which kills her somehow.

The movie was made and released during the second world war, which gets no mention in this movie - but you can see how it would have played to the women at home during the time.  It's a handy bit of soapy escapism, women aren't worried about rationing or Victory Gardens.  It's all New York glamour and treasuring domesticity as the real goal.

By today's standards, the movie would struggle a bit, possibly, as the realization of Joan Leslie is not that she wants career and love - it's that she has to choose between love and a career.  Whether real humans make choices like this is moot, but you'd be less likely to see this struggle, let alone Lupino's character have to die at the end.