This weekend Jamie and I flew to New Orleans for the wedding of two folks I met via blogging and have become good pals with as we all lived in Austin for a few years before they departed for San Francisco and then NYC.  On Saturday Steven H and Lauren R tied the knot in City Park with yours truly officiating.

This was the third time I've officiated and every time it's no less nerve-wracking, and it is no less special as I've known all the couples well and know their stories.  It's truly an honor and privilege to be asked, and to get to play that role is a truly memorable experience.

It's also the best seat in the house, if you're going to show up for a wedding, anyway.  You want to see people having a moment as up close as it gets?  That's where you want to be.  You'll also see your friends looking as dashing and beautiful as they will ever be from, like, three feet away.

In short - I hope I didn't mess up the ceremony too much.


I haven't spent nearly as much time in New Orleans as I should.  It's an amazing place, and I get how people decide to pack up and move there despite the many issues the city faces.  And I am aware I was in a tourist hotel in a tourist part of town (we were right in the French Quarter on Royal Street).

The morning before the rehearsal I had the unique experience of getting a true shave at Aidan Gill for Men, an old school as old school gets barber shop.  No less than nine towels, multiple face scrubbings and scrapings, and, as the barber said when I sat up at the end, "your face probably hasn't been that smooth since you were in middle school", and it's true.


At long last I get what the deal was with guys going in for a shave.  When in New Orleans, if you've got facial fuzz, folks, I recommend spending the dough just for the experience.  And all the better if you go with a group and they seat you on the back patio where they also set you up with good quality booze and other refreshments.

That evening we made it to the Peristyle for the Rehearsal, and then returned to the French Quarter for a lovely dinner and some great chatter with the wedding party and the Roth/ Harms families.  (I had a world class steak.  It was mind-boggling.)

On Saturday we had hours to kill before the wedding, so Jamie I walked all over New Orleans because I went the wrong way when we left the hotel, but we did see Lafayette Square.  We eventually did find the Audubon Aquarium, which was much better than I expected.

After this we returned to the hotel where Jamie rested up and I rehearsed my bit.

At 5:00 we were at the appointed hotel to get picked up by the bus to take us back to the Peristyle when I realized we were at the wrong hotel and we dashed out the door.  We got to the correct hotel in time to watch the bus leave without us, but this is why they made up cabs, so we got the experience of jumping in a cab, saying "we're late for a wedding and I'm the officiant!" and the cabbie saying "no problem!" and then driving like mad to get us there in time.  It was kind of awesome.

The wedding, itself, was absolutely lovely.  Steven and the Groomsmen had some A+ tux, the bridesmaids all looked gorgeous, and Lauren was stunning in white as she arrived in a vintage Rolls.

At the Peristyle, you're still in the middle of a City Park, so there's people all over the place and whatnot, but they also get to witness the proceedings.  And nothing punctuates a first kiss as husband and wife like someone bassing as they drive by.  I kid, but it's kind of special to have random people cheering you as you walk back down the aisle together.  If weddings are a public acknowledgement of your joining together, all the better if it's truly public.

But here's the thing, kids, and I get to see this as the officiant in a way you do not from out there in the folding chairs - it's sort of amazing to see two people committing to each other like that and meaning it.  When you're in your own wedding, it's all a blur and all you can see is your beloved's face, a ring, and then you're outta there.  But up close and as a third party - anyway, I recommend officiating so you can see something right happen in this world. 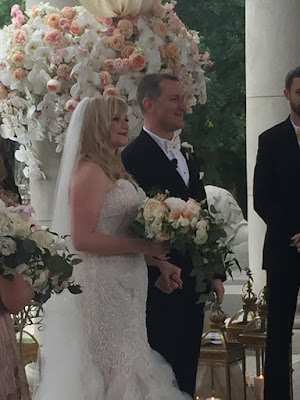 In a weekend already full of new experiences, we then hopped a bus which took us to Canal Street where we then had our own Second Line parade up and down Canal and into the French Quarter.  Dinner was preceeded (and, hey, do this if you're planning a wedding) by the first dances and speeches (during the open bar portion of the evening).  If you watched the clip, you'll notice Steven and Lauren are light on their feet and excellent dancers, and they had some folks there who taught some swing dance steps.

And it doesn't hurt that Steven and Lauren's first dance was one for the ages. 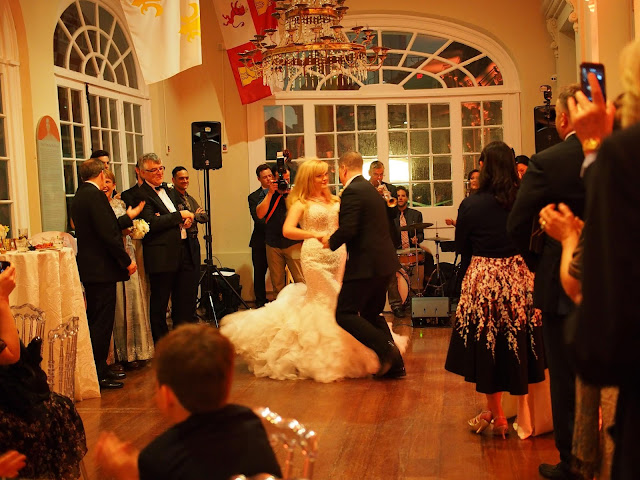 All in all - a lovely wedding.  Thanks to Lauren and Steven for a memorable and thoroughly enjoyable weekend, and many, many decades of happiness to you both.

And, of course, Jamie looked smashing. 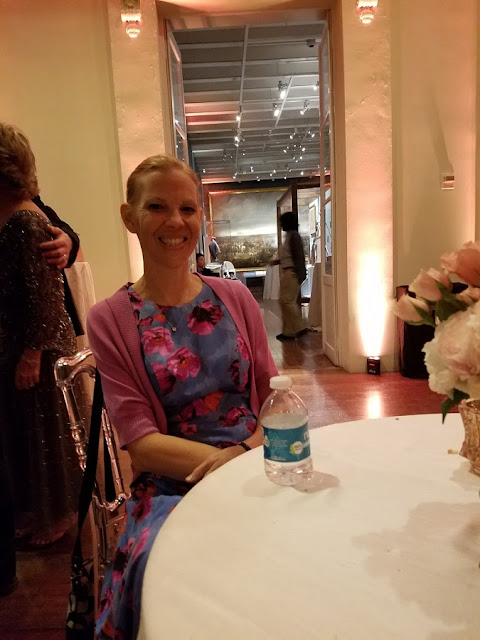