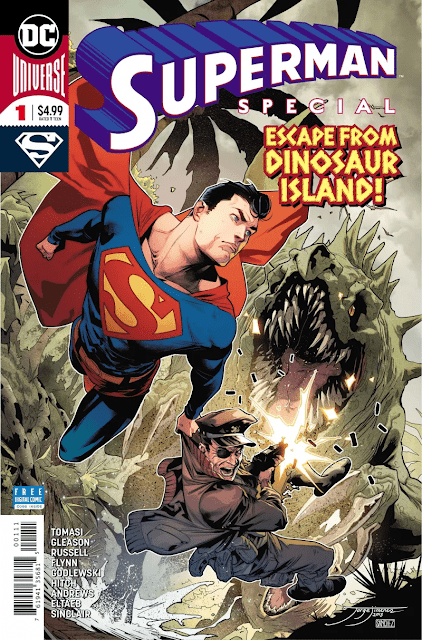 I'm less of the belief that this issue is pulled from inventory stories than the Action Comics Special.  Like so much of Tomasi and Gleason's run on Superman, their follow up with Captain Storm speaks to the sort of long-tail thinking that doesn't always happen in Superman comics or superhero comics in general.  Not that often do characters get to wrap up a prior story and provide full closure for a supporting character - and in Superman's universe, there are lots of people he sorta helps and then moves on, and the next writers aren't interested in picking up those threads, leaving those stories and characters in narrative limbo.  So, yeah, as a reader who really enjoyed the Dinosaur Island issues, seeing Captain Storm rescued and brought back to the world wasn't nothing.  Especially since this team already wrapped things up as well as you could ask for in Superman 45.

The real surprise to me was that the story stuck with Storm back in the world and did so empathetically - and, frankly, maybe opening the door for Captain Storm to show up elsewhere (likely with new Losers, which I'd welcome).  It's straight character work we don't make enough time for in DC books.

After having Doug Mahnke trading chores with Gleason and others on the title, I'm not sure the work of Scott Godlewski is a stand-out, but I do think he's doing a solid job on page layout and really smart choice of angles in his frames.  Some of it is really nice, like the splash of Captain Storm running from hungry dinosaurs.

In theory I like the second story, Strays and Strangers, that's one of the short, poetic bits that shows the compassion at the heart of the Man of Steel.  You can't say one bad word about the art by Hitch or punchy, lovely colors by Alex Sinclair.  It's a straightforward few pages that feature Superman returning one of DC's giant Atlantean made-up creatures to the ocean after it rampages by accident through the city (instead of fighting it).  A building is collapsing and Superman saves an elderly tenant, but in going back in must choose between saving the man's photos or a dog.

Now, I'm always going to come down on the side of the dog, too, but unable to save the pictures, Superman hands the old man the dog and says "make some new memories!" after the guy says something that - honestly - might make me wonder if the guy wasn't in the early stages of dementia as he worries he will forget his wife.

It's... a weird way to end the story.  I like dogs and old people, too, but the last thing I would hand someone in their twilight years who just suffered trauma, lost everything and maybe was beginning to suffer cognitive issues is a dog.  Especially when *someone* owned that dog who didn't happen to be home when the giant silverfish attacked.

Well, at least it's a pretty comic.

The final story is a nice one.

From time to time superhero comics allow for the idea of rehabilitation of villains - after all, what good is it to apprehend criminals if you can't give them a chance to improve themselves?  Of the hundreds/ thousands of Superman stories I've read - Joe Kelly's rehabilitation of Major Disaster after Superman reached out to him was one of my favorite moments (Joe Kelly's stuff was always terrific, and I miss reading his work).

I forget when and how Atomic Skull went from nutty badguy to heavy for the Major Crimes Unit of the Metropolis PD under Maggie Sawyer, but this story by Ian Flynn and Kaare Andrews does a terrific job of exploring what that means to Skull and Superman.  Atomic Skull still harbors bad feelings and distrust - and assumptions about how Superman feels about him.  Superman is pleased Skull is seemingly reformed, but Superman's actions push a lot of buttons from when Skull was a crook and felt outmatched.

It's a tight short story and if it's leading into more Superman/ Skull meet-ups, and more MCU, I'm all for it.  But as character work, I have to tip my hat.  That's what's really going on here, and it's a nuanced take that makes Skull less of a simpleton (as I feel Skull is usually portrayed) and more of a guy with confidence issues and a chip on his shoulder he hasn't quite removed - giving a lot more space to the silences and awkward responses Skull usually communicates with.

All three stories are place holders til we pick up with Man of Steel, and that's okay.  It's not a "special" as in "we have so much story with this massive event we need to include these pages outside of the main titles" - but it does gear us up for what's coming.  And, honestly, it's really nice seeing Superman back in the classic suit.  As much as I liked the last one before this, you can't beat the trunks for design and a nod to the audience that "we care about this character and his legacy, and we're not here to re-imagine who and what Superman should be".