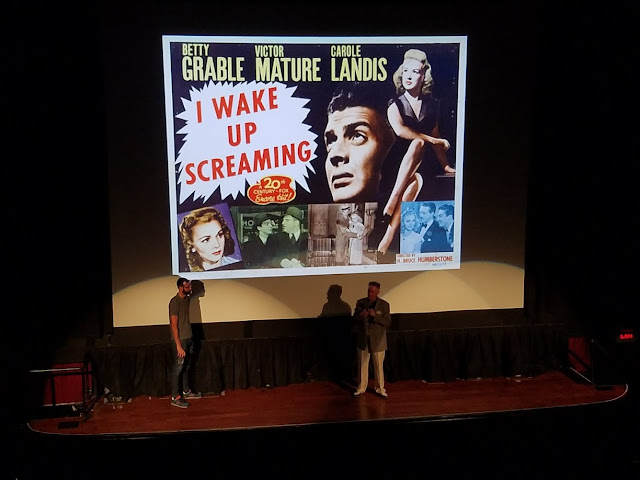 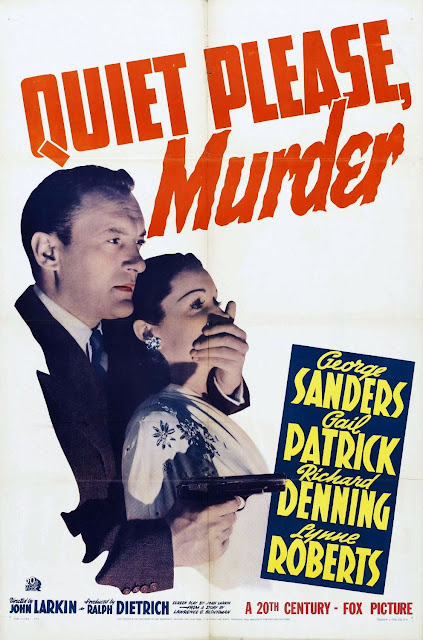 It's Noir City Austin 2018 down at The Alamo Ritz!  As in prior years, Eddie Muller - the Czar of Noir and host of TCM's Noir Alley series is in attendance.  As he does so well for Noir Alley, Eddie introduces each film, providing Hollywood history and necessary context, as well as any anecdotes he's dug up over the years, often from first-hand interviews.

I can't make it to all the movies this year, but I am trying to make it out to see a few.  Friday night SimonUK and I took in the first two films, I Wake Up Screaming (1941) and Quiet Please: Murder (1942).

It's been about a decade, but I have seen I Wake Up Screaming before.  I remembered three things about the movie:  Laird Creager was amazing, it had Victor Mature, and it has one cut in the movie that's so good, the first time I watched the movie I kinda yelled "oh my god!" in the comfort of my own home.

Everyone in this movie knows what kind of movie they're in but good 'ol Victor Mature who's still swaggering his way through the events of the film - in which he's accused of murder - like he's just having a whack-a-doodle day he needs to get through with a smile.  Creager seems ten or more years ahead of his time in acting technique, giving a virtuoso performance while everyone else hits their familiar marks.  The movie also features Elisha Cook Jr. in an early role, Betty Grable as Betty Grable and Carol Landis as our unfortunate victim whom we meet in lengthy flashbacks.

It's a twisty murder mystery with several suspects, and as Muller's program for Noir City is showing noir from it's nascent days to into the 1950's, this first movie is early, early days for what we'd think of as noir (arguably the narrative content itself was already there twenty years prior in the pulps, but that's not film and thus not noir.)

To recommend it:  Laird Creager is a talent who passed far too soon, and this is one of his few performances.  The camera work is early, perfect noir shadowplay, and the dialog is quippy and quotable.  Not so great: as Muller mentioned - this movie uses "Somewhere Over the Rainbow" as the the theme for the victim - and beats you over the head with it.

I'd never even heard of Quiet Please: Murder until it showed up on the program for the fest.  Muller rightfully pointed out that the movie is a product of wartime, so the leads are off-brand and kinda oddball B-listers with George Sanders topping the bill (whose voice you know even if the face doesn't immediately ring a bell - he's Shere Khan).

Honestly, I enjoyed the hell out of this movie.  Sure, it mostly takes place in a library/ archive in a "locked door" situation*, but the characters are all sharply defined, there are multiple angles working against each other, and it's a unique set-up.  Sanders plays a forger of rare books - which to this day are highly collectible and expensive items.  He's using Gail Patrick as a "legitimate" face to move the forgeries when both an East Coast party figures out they have a forgery and an agent tied possibly to leaders of the German hierarchy does same.  Patrick and Sanders have a strange relationship of double-dealing and criss-crossing one another to cause one another misery (and there's a definite indication of a bit of BDSM going on off-screen, which is wild for 1942).

Everyone is scenery chewing in this movie, and you kinda can't help but like it not in spite of its eccentricities but because of them.  Add in the "what is the worst title we could give a movie?" title, and it's gonna stick with me a while.