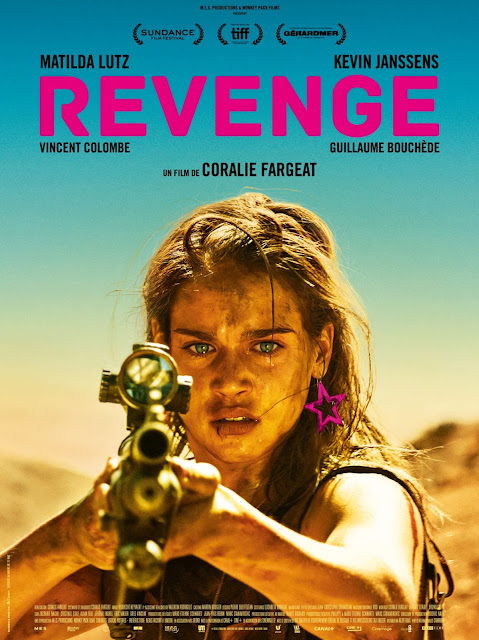 Not all movies are for all people.  Sometimes a movie, despite a rip-roaring ad, when I see the movie, in practice, I am fifteen minutes in and realize "oh no..." but there you are.

Revenge (2018) is getting a lot of critical acclaim, but in three years no one will remember this movie.  It's nothing you haven't seen before in a movie, it's got a whisper-thin plot that's basically The Most Dangerous Game, but wrapped up in a package comprised of a woman striking back at three flavors of male wretchedness that damage women.  (Why just three?  It's such a rich palette...)

All of that sounds pretty cool, but the end product feels like a short film stretched out over a tedious feature-length runtime where you can't tell if the creators are trying to genericize the characters to make a point or that "eh, people get it" and thought that's all they had to do.

I know I know.  I can almost guess who this movie is going to work for.  I'm just not that person.  It's not why I go to the movies.

So...  I had to look it up - but the movie takes place in Morocco on a luxury hunting ranch on the edge of a desert.  A handsome fellow arrives a day or two early for the trip with his young North American girlfriend (the wife is back at home).  The hunting pals arrive early and meet the girlfriend, all of them hang out.  One of the two friends takes an interest in the girl, and given a chance, rapes her.  Not wanting her to cause problems back at home, they believe they've murdered her, leaving her in the desert.  But she's not dead!  She's gonna get REVENGE.

Revenge may leave you wondering "is this movie supposed to be funny?  Is it magical realism?  It's clearly satire, and probably best categorized as a horror film rather than a thriller, but wasn't there a better way to fill out the runtime than endless repeating shots all coming to a foregone conclusion that they showed in the trailer?"

And it's not that I don't care about the bad behavior of the men or generally find the premise a good one - it's that if I'm going to see this movie again (and you've seen this story over and over if you're over a certain age) then I'd like more substance to pair with the more than ecstatic over-stylization of the movie.  The wafer-thin plotting and characters make it a movie that's easy to ignore, reducing characters to mustache twirling villains and a lead who would have been more meaningful if she never was given a name (because I think she literally has four lines) - gone whole hog on the fiction-suit idea the movie is trying to accomplish.  It undermines itself with it's inability to do much more than go for cheap gore and work entirely in broad strokes.

As SimonUK said as we were leaving "you just kept waiting for it to get good until you realized it wouldn't".  It just never quite fulfills on what could have been.

At best this is a Netflix streaming or Amazon Prime way to kill a couple of hours, but it's less content than an hour of your favorite drama.  But a whoooooole lot more blood.