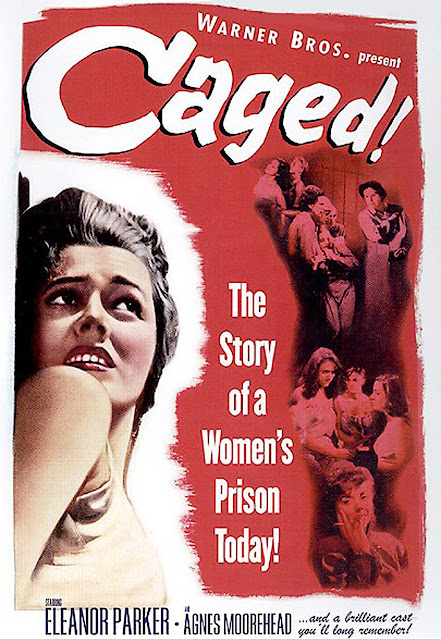 There are probably two ways to watch Caged (1950), either as a camp classic or through the lens of 1950.  JimD taught me several valuable phrases, and in the top three I include "chronological snobbery".   Basically - chronological snobbery is that thing you do when you watch a movie made from a time probably before your birth and nod sagely to yourself saying "oh, thank goodness we figured out how to make better movies, people sure were dumb as both filmmakers and as an audience back then."


Far be it from me not to find a bad movie hilarious or have a chuckle at an outdated turn of phrase that now sounds absolutely filthy, but I think it's important with some movies to get your head into the mindset of the time in which a movie was released and why it's message or story meant something at the time, understand the standards for acting and presentation, and try to place the film in the context of movies in general of the era.

I can understand why audiences might have taken to Caged as a camp-fest - in part because it's been replicated in many ways ever since as the "women in prison" genre flourished well into the 1990's, veering off into sexploitation at least by the 1970's.  Some of these movies were just cheap or bad, but others went ahead and were just straight camp.  (I haven't just seen Reform School Girls, I own it on DVD.  No, I am not kidding.  Ask me about my Columbia House DVD subscription sometime.).

But in 1950, a cool 50 years into the rise of film and pretty well into the Code era of filmmaking, Caged must have hit like a ton of bricks and it both still works and remains relevant.

The story follows Eleanor Parker as Marie Allen - a young woman who enters prison after agreeing to drive the car for her husband after he robbed a store for $40 (had it been $35, might not have been a felony).  The husband was killed in the hold-up and now she's serving time - and immediately learns she's pregnant.

Marie is a timid girl, but her hope is that she'll be paroled in less than a year.

Meanwhile, an abusive Matron, a politically hamstrung Warden (Agnes Moorehead), a cellblock bully and others play out their parts.

Again - you can see how the sincerity portrayed in near any movie from this era was seen through the lens of camp in the 1980's, especially anything paired with some of the extremes this movie goes to in both character and events.  But just 5 years after WWII in the new America where everything was a victory and women were supposed to be transforming themselves into happy homemakers, the realities of the film's abuses and melodramatic flourishes as characters meet their fates must have been as relevant and surprising as any Oscar Bait message picture of 2018.

Unusual for its era, this movie doesn't go for a happy ending to meet Code approval.  Our Marie Allen, broken by her treatment and the soulless bureaucracy that's been simply shaking her like a ragdoll finds strength and survival in doing what she feared from day one and warned would happen - she becomes like the rest of the hard-boiled crooks with whom she's sealed up - her sense of decency and dignity shattered to a million pieces.

It's also infuriating to hear the same arguments that still plague our prison systems echoed 68 years ago - what responsibility do we have to rehabilitate the lawless?  Don't they get what they deserve?  Why should the tax payer fund more than the bare basics?

As a debate - the illustration of "why, indeed?" encapsulated in Caged illustrates the failure of incarceration without rehabilitation via story.  There's a logic and an exposure to the environment the public may not have had opportunity to previously consider.

That this sort of thing was co-opted and re-mixed for a wide variety of purposes is curious - but it does speak to how the movie catches the imagination, I suppose.  It's worth a viewing as a movie - and a curiosity as a female-dominated film that does indeed pass the Bechdel Test with flying colors.

and, yes, I was surprised by the parallels between this movie and Reform School Girls.  Everything comes from somewhere, I suppose.
Posted by The League at 5/17/2018 11:15:00 PM