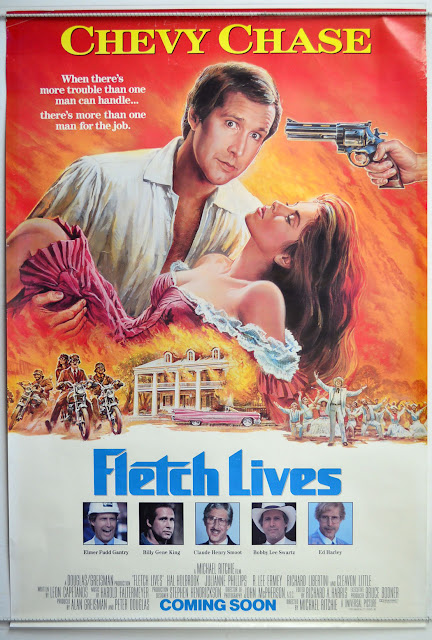 The 1980's were a golden era for wise-cracking, working class everyman characters in the mode of Bugs Bunny - a sort of trickster god who would move among the mortals, a bit above it all as they worked through the genre of movie applied.  This is, by the way, not a complaint.  I'm a ride or die Bugs Bunny man, myself.  And I consider Bill Murray's performance as Peter Venkman a highlight of our shared existence.

I vaguely remember seeing Fletch in the theater and on cable and VHS (it was in standard rotation for boys in the suburbs), and remember going to see Fletch Lives (1989) at Austin's Northcross Mall - the outdated mall (in 1989) with the outdated theater - upon the film's release.

I have no exact memory of my impression other than "that wasn't as good as the first one" and that thing you're already picking up on at age 14 - that there will likely now be no more Fletch movies if this is what they have to work with.

Like in the original film, there's a mystery - this one more personal as Fletch inherits a decaying plantation in smalltown Louisiana and first - his attorney is murdered in their shared bed after a night of 1980's perfunctory movie sex.  Then Fletch is harassed, etc... as it becomes clear someone wants that land.  It could be the giant Bibleland Amusement park which has come in nearby, complete with a TBN-like faith healing show (the most 1980's of all possible topics).  Maybe the KKK.  I dunno, but it is gonna be a Southern stereotype.

Fletch does the Fletch thing where he's sort of talking to himself throughout the movie, and...

I want to stop here and say to the white men of America: being a snarky asshole all the time does not make you Fletch.  And it sure doesn't make you Bill Murray.  You are not a hero in a movie, you're an asshole and just because your one sad, sycophantic toady pal thinks you're funny, you're not, and you're still just an asshole.*

At age 43, and here in the confusing era of 2018 (I forget - it's supposed to be bad to sexually harass women and be openly racist, but we elected Donald J. Trump to run the free world, so...), I am disinclined to suggest the film has aged well.  What was possibly the biggest laugh-getter for me as a privileged white kid in 1989 "Dance for me?  Why, I'll dance for them!" is now a very weird scene to watch, indeed - as this was the first time I'd seen it in probably two decades and noticed it's an all-white group playing the slave roles in what, I assume, was considered a way for them to have their cake and eat it, too.

Cleavon Little, who did some of the best spoofing of racism in film history, appears in a slim role as Fletch's aunts former house and grounds keeper who is somehow also an FBI agent (despite everyone in town knowing him).  But the movie sort of both wants to address race in the South and then firmly refuses to do it.

And the whole movie is like that.  It's got the televangelists who, in 1989, had rubbed everyone the wrong way and were due for lampooning, and there's some of that, and Fletch playing a character of a faith healer briefly is... kinda funny.**  But it never really sends up the whole idea or does much with it (and as someone who was on the Oral Roberts University campus circa 1991, complete with a walk-thru tour of the book of Genesis done in animatronics and Oral Robert's life in much the same way... man... there is room for exploration).  Or the biker gang or other rednecks shown in the film.

Maybe the messiest part of the movie is that when women aren't turning down Fletch's single entendres, they're deciding he'd make a fabulous sex partner for a one-night stand, at least, despite an utter lack of a discernible reason why as Fletch always seems surprised as these women sort of throw themselves at him (but he is a protagonist in an 80's comedy, so...).

All in all, sure, it's problematic, but it's also tired.  Nothing about the mystery makes sense or really works if you engage with it at all.  Chase himself seems to be dealing with the movie mostly the same way Fletch deals with everyone around him - he's just sort of there, wishing he weren't, trying to amuse himself until he gets to something better.

In addition to Chase and Little, the movie also has Hal Holbrook, R. Lee Ermey as the televangelist, George Wyner, Randall "Tex" Cobb (who is in the movie way more than I'd recalled), and Julianne Phillips - who was briefly married to Bruce Springsteen, according to IMDB.

I dunno.  It's just one of those things.  Enough time had passed, the culture has changed and grown.  What was once a kinda-funny movie now plays as dated, and it's all the more alarming to realize this was not a movie from some fuzzy period before you were born - this was one you spent money to go see.  It's not exactly Birth of a Nation offensive so that HBO should never show it without a lot of context, but it's also not *not* problematic.

Increasingly, I suspect, we're going to see a lot more of this in the films of our youth and have to figure out how we're going to reconcile what was fine or even progressive at the time versus what works now and what doesn't.  It's part of what makes revisiting older films an interesting experience: they wind up reflecting the culture of the time, same as any film has done since Edison was making his employees do little dances and stuff as he worked out his motion picture camera.  This one is just from my lifetime, and that, ladies and germs, is a weird experience.

We'll get old and a younger generation will be able to view these movies with some detached perspective and find them funny again.  But I suspect the flat, half-assed nature of this movie will always shine through in any era.  The lazy set ups for jokes, the limp plotline and setting, and, of course, the unfinished characters just sort of there for Fletch to steamroll...

I understand this movie may have been the beginning of the end for Chase's big-star career.  And I really don't remember him appearing in much after this that was wildly popular.  I'm just not sure Chase is exactly the problem in this movie so much as the then policy of not trying very hard on sequels.


*the more you know (star-rainbow) - also, check out how that's worked out for Chevy Chase longterm

**I was trying to correctly remember the name Peter Lemongello, and wound up learning there is a very real performer named Peter Lemongello that Chase was name-dropping
Posted by The League at 7/17/2018 12:46:00 AM

My brother and I loved Fletch so much we wore out our VHS copy and quoted it constantly. And sang the instrumental theme song. Our poor parents. When Fletch Lives was released, it was the first time I associated 'sequel' with 'cash grab'. It was everything you've mentioned here. No one feels like they actually want to be there and the jokes are tired. And yeah, I remember being uncomfortable with the racial and misogynistic overtones even back then. Yikes.

I vaguely remember feeling squeamish about Cleavon Little's character (who gets redeemed in the most "this will work in flyover country" way possible). And a few other things. I will say - seeing this again, I'll be charitable and say that I am sure they would handle how Fletch relates to women differently.