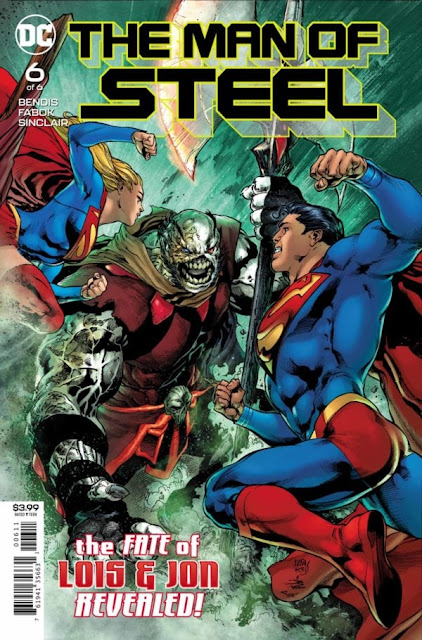 
After not particularly enjoying issues 4 and 5 of this series, issue 6 didn't exactly soothe my worries about how this era of Superman will work, but it did finally get around to at least putting the questions forward rather than hinting around what the questions might be.

In truth, issue 6 posed the questions in such a way that I actually bit.  I'm as curious as the next reader as to how all of this will play out, even if the pacing feels pinned to a geologic timeframe.  All in all - it's a fine issue, but it's hard not to think the crucial beats might have occurred over 3- 4 issues and saved everyone $8.

I continue to disagree with some folks online who expressed a "bland" tone or voice of Superman in this comic - Bendis has identified specifics that work organically, fit with what we know about Superman and his manner of addressing people with a level of civility other characters can't or don't.  I will argue he will need to come back to Lois with the same care he's shown Superman if he wants longtime readers to feel he's doing her justice.*  But as per Clark - In a series that does allow us to occasionally glimpse Superman's inner monologue via captions, there's a lot of silence on anything but what's in the moment - instead the concerns have been conveyed via flashbacks as Superman resists the urge to overshare even with a limited omniscient reader.

Plotwise:  we finally get to hear "Jor-El"'s hand-wavy, generally insulting reasons for wanting to show up and grab Jon and travel the universe with his grandson.  Meanwhile, Superman continues to fight Rogol Zaar until Supergirl shows up and pops him into The Phantom Zone.  And in a last-page cliffhanger, a kid shows up and tells the fire chief that the series of fires in Metropolis was set by Superman.

I don't follow all that many DC books these days, but I do know the Mr. Oz storyline started off touching books outside of the Superman titles, then seemed to just be the Superman titles, and then it was revealed the mysterious Mr. Oz was Jor-El, Superman's father who magically escaped Krypton and has been maybe hiding out for decades watching Kal-El grow up on Earth, etc...  and somehow decides to wait til Superman has been in action for more than a decade and has a 10 year old kid (so now I'm figuring our Superman is about 43 or so) to reveal himself and "neg" Superman into handing over his kid who is having some issues with his playmates.  And makes a Silver-Age jab at Superman for wearing the playsuit Ma Kent made him out of his Kryptonian blankets.

Honestly, the entire Jor-El speech reminded me of DC's horrendous 00's-era habit of having Batman show up and dress down Superman in his own title, leaving Superman all sad for himself while Batman flew away in his batplane to presumably feel good about himself for yelling as Space Jesus.

But like everything else happening in the book - it all just feels like "bullshit to be revealed for what it is".  I just don't buy any of it, whether it's actually what's happening or not.

It seems a bit odd 80 years on for DC to decide (a) Jor-El is alive, (b) some previously unheard of entity actually destroyed Krypton (and billions of people) and (c) let Kandor be destroyed, killing something greater than half-a-million souls on Superman's watch.  I mean, maybe this is all what DC is planning to do longterm, but - if so - the delivery is  utterly weightless.  We're given far more page count to Superman's mopiness regarding his wife and kid splitting than, say, seeing Kandor destroyed, which is a pretty serious event in the history of DC if that really just happened.**

Revealing a deception as part of a story is something I'm all about - I like a good mystery.  But if it's all a clever illusion by some villain yet to be seen (and it's hard not to remember that Dr. Manhattan is running around the DCU somewhere playing god), then we're burning a lot of daylight as Bendis sets up the premise of his two ongoing Superman series.  If it is the new status quo - and we do know Jon and Lois will return, Bendis had to go to the media to reassure readers WTF'ing the removal of beloved characters as the opening chess move here - then... you know, I don't know what I signed up for.  It's going to have to be one hell of a story to not make me say "well, I don't understand what DC is doing anymore".  Because I am, after decades of this, so, so tired of shocking truths that will change everything about what we didn't know about the events that made our heroes.

Still... I want to give it a chance, same as I would any mystery story.  In his way, Bendis sort of turned it around here in the sixth issue by giving characters a bit more focus and engaging proactively instead of simply reacting and swinging away at a monster man from space with a goofy name.  I've enjoyed the JL guest appearances, and recognizing the potential of a Kryptonian team-up (even if Krypto was AWOL) was pretty great.

I watch enough noir and read enough detective books that it's not like I'm averse to mysteries.  So, I can slog through this one a bit more.  Especially if the art is this good.

Speaking of - I've not followed Fabok all that much, but this line-up has been mind-boggling.  Truth be told, DC's art squad is producing excellent work in general.  I might quibble here and there with something, but allowing pencilers to be their own inkers seems like it's paying off, and I really dig the Skittle bag of colors applied by Alex Sinclair.  Maybe not great for a Batbook, but for Superman?  A real treat.

Next up (and already on my coffee table) - Superman #1.

*for all the weirdness of, say, Morrison's plotting, his characterization is almost always specific and definite from the moment one of his versions of a character walks into frame.  For possibly less weird writing - same for current work by folks like Waid.

I think I am destined to be a trade-waiter.

Given how quickly DC puts out trades in paperback, I think you'll be a happier reader in the long run