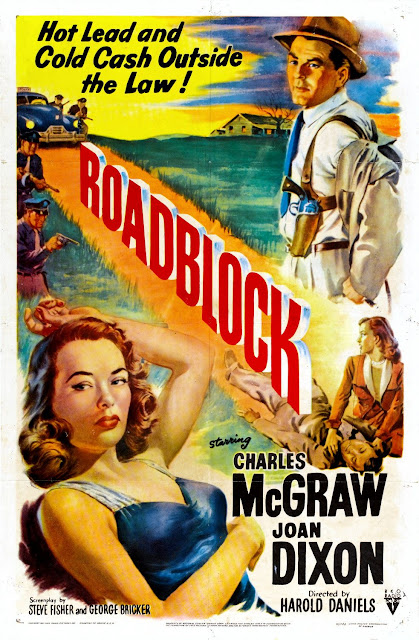 
From RKO comes a B-programmer (with locations and sets I recognized from other RKO films), that stars noir staple Charles McGraw and the lovely Joan Dixon.  I'll go ahead and say: I was not expecting much out of Roadblock (1951), but this movie  went past "okay" and beat it by a country mile.  I'll gladly give this one a second viewing some time just to see how it works and how they did it.

McGraw plays an insurance company detective (so you know he's @#$%ed from the get-go) who happens to meet an attractive grifter at the airport (Dixon).  She's headed to LA to find a way to live a life of glitz and glamour.  Minor plot point, but she's broke, so she poses as McGraw's wife to get the "wife" discount, which I guess was a thing in the 1950's, but when the plane had to land in Missouri due to weather, she now is trapped in a hotel room with McGraw or she gives up the jig.  While there's an attraction (sort of, in that "I hate you! I love you!" way), she tells us she's not settling for some salaried guy who can't get her furs, etc...

Back in LA the two part, but run into one another later when she's mixed up with a racketeer as his lady-friend.

Big spoiler:  At Christmas she realizes she'll spend all her Christmasses alone and decides to go for the honest guy with the good job, and they happily decide to get hitched.

But McGraw knows she'll want money and furs soon enough, and so he goes to the racketeer to set up a job that will pay off big.

Dixon is set up as the femme fatale, and she is that - but almost indirectly.  She's no Out of the Past Jane Greer sociopath who looks great in a gown - her turn to McGraw is sincere.  She's done with great gifts but playing second banana to rich men's families (plus, guilt and stuff).  The movie plays exceedingly well on the economic anxieties, to borrow a phrase, of a guy who knows there's some truth to the idea that she may be in love now, but in time, she'll go back to wanting those material things.

Both the way the film ends and the short time frame of the story never give us a chance to see how any of it plays out long term.  Really, we never get the questioned answered, and while no one exactly blames Dixon for McGraw's heel turn, there's a bit of non-movie reality to why he does it.  He knows once he has the girl, that could be just the start of trouble.

There's some surprising violence in the movie, both on screen and off.  A daring train robbery ends in the death of a postal worker (we don't see the heist), but we do see McGraw both beat a witness to keep him from talking and murder a man to cover his tracks.  As far as noir protagonists who've slipped a bit in the pursuit of a dame, it's hard to think of one who fell further.

Plus, there's a kind of kick-ass car chase at the end in the Los Angeles River system you've seen in so many movies.

Yeah, I kinda highly recommend Roadblock.  It's never going to win Best Picture, but as an example of this thing we call noir, it's as spot on any of them.  Maybe it doesn't have the phenomenal cast of Night and the City or brilliant camerawork, but the script is tight and tense, and McGraw - more because of his insecurities than in spite of them - is a fantastic protagonist to follow even as you're shouting "dude, NO!" at him from time to time.

As a last sidenote - Dixon looks a bit like the animated Lois Lane from the Fleischer cartoons, ten years after the fact.  And not to detract from the fine work of Phyllis Coates or Ms. Neill, but I think Dixon would have made a swell Lois, too. 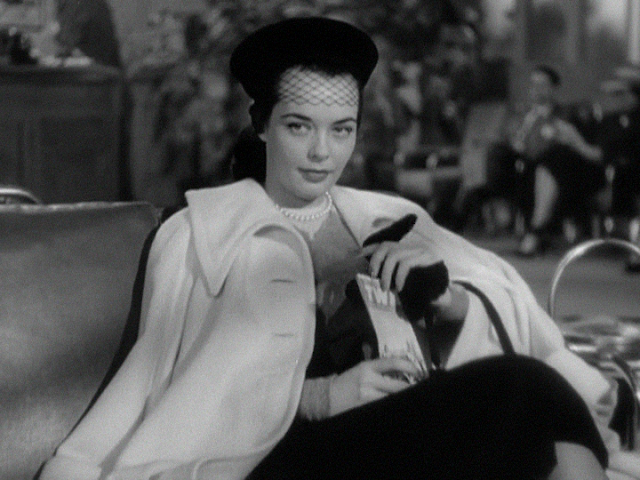