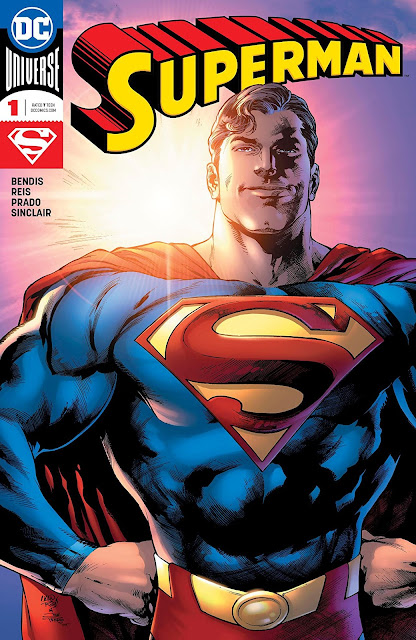 
It's difficult to figure where to start with this comic - so I'll point out the thing I noticed first upon flipping the book open (I read paper comics).  The book is not printed on the sleek, glossy, heavy paper of everything else on the stands from DC - it's printed on pulpy paper.  Not the same newsprint-grade stuff of comics of yesteryear, but it's not stuff that's intended to last 400 years without a hint of change or aging.

The change to the glossy paper, which I think occurred mostly in the late 90's or early 00's, was intended to better show off the coloring and design work of comics that would have just disappeared into the pulp paper of comics used to the 4-color color-dot process instead of the sleek look of magazine-type paper that shown on every page (whether the art warranted it or not).

On this book, Ivan Reis, part of the late-00's-era DC art renaissance, and recent cover artist on Man of Steel shows up for what I assume will be a monthly gig of some sort.  I'll never complain about Reis - the man's work has enhanced Justice League, Superman, Aquaman, Green Lantern and far more.  I like the bulk and weight he puts on Superman/ Clark Kent, and we get treated to some outerspace and spaceship stuff, as well as Superman taking action in Metropolis.  Joe Prado's inks are a bit heavier than I'd expected on Reis' work, but given the mood of the book - and they do lighten up in the right places (like in flashback or in the Daily Planet) - it doesn't feel wrong or off-putting.

It's not clear how the paper impacts the art - does it absorb color?  Is it handled fine?  I had no problems reading it, and I don't miss glare on my pages.  Sinclair's colors were typically robust.  So... DC, if this is an experiment and will save money, I'm in support.

The story continues directly from the events of Man of Steel #6, making it clear that the mini was always a marketing thing and a starting point for future readers to know where to jump in on this era.  And like Man of Steel #6, while the story does wallow in snippets of flashback, it feels like gears are moving out of neutral and at least into first.  Superman is taking action - he's seeking out his family in space (and has a cheeky, kinda hilarious encounter in space beautifully rendered by Reis).  But returns home, acknowledging (a) space is big.  Like REAL big. and (b) he has stuff to do at home, too.

The flashbacks here are less expository and more tonal in nature, informing us as to Clark's loneliness and sorrow and confusion.

Meanwhile, maybe responding a bit to his father's suggestion he hadn't been active enough, maybe in response to his nerves, he's trying to deal with issues planetwide, all the time.

What will likely be a scene that gains in significance eventually, Martian Manhunter meets up with Superman to get where he's at and make some suggestions as to what Superman could be doing when the big cliff-hanger plot point of the issue comes into play - the issue ending with Superman realizing Earth has been drawn into The Phantom Zone.  Yeah, the whole planet.

It's a heck of a place to stop and something that can be addressed immediately in the next issue, which - given the extended nature of a Bendis mystery and the certainty that between the return to a monthly release schedule gives us a shot at something getting addressed in the near term.

All in all - this issue reads a bit stronger than the set-up of Man of Steel, and maybe we just needed that runway to get going.  I do fear Bendis shed readers along that runway, but it is what it is.

I am hoping that by December this book has delivered something that feels more like a win, something that feels like this isn't just a series of punches to the head Bendis is planning to hand Superman (and I know he specializes in delivering misery for his protagonists).  So, we'll hang in there and wait and see.

In the meantime, I'm a bit surprised by DC going back to 2 Superman comics per month.  Okay, I'm a bit sad that there's just two Superman titles per month, especially just as we lose New Superman and Superwoman.  But it's not like DC to leave money on the table, so we'll see what happens.  It can't all be variant covers to bring in the bacon (or can it?).