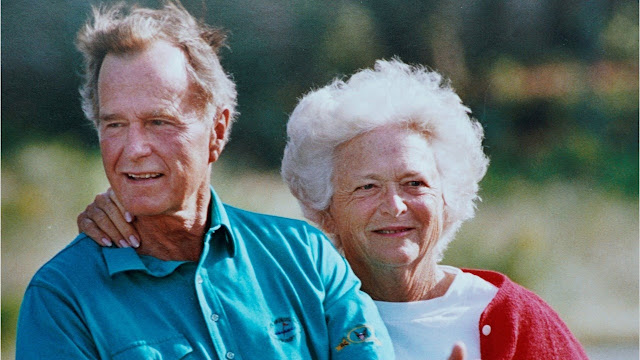 Former President George Herbert Walker Bush, our 41st President, has passed at the age of 94.

From the New York Times.

I genuinely always liked Mr. Bush as Vice President and then as President.  When I think of the age in which you may not agree with policies and procedures of a politician, but respected the integrity of the person, I often think of G.H.W. Bush.


A World War II veteran and war hero, former head of the CIA, and - yes - part of a wealthy East Coast elite family, George Bush (as we knew him before his son came on the scene), came in to office on the heels of a very popular two-term president, and oversaw a crucial period in global politics as his own nation shifted around him.

There are enough biographies of Bush, and we can litigate his record some other time.

Despite the New England background, the Bush Family made Texas their home, and in his retirement years I always found it a kick to see he and Mrs. Bush (who showed up less often) sitting behind home plate at Astros games.  They also placed their Presidential Library at Texas A&M University and remained active in charity and social work in Texas after Mr. Bush retired from public life.

I guess it was around 1998 that I was visiting Houston for Christmas and somehow secured tickets to see The Houston Symphony with special guest Crystal Gayle*.  As the show was set to start, in wanders George HW Bush who waves hello and gets a big standing O, like everyone's favorite uncle.  People shouted for Barbara Bush, who he explained was coming later (she appeared at intermission, receiving thunderous applause).  He then hopped over the back of the seats and into his chair which was about twenty feet away from me and my pal.  There was only a large aisle between us, so I often tell people "I once sat behind George Bush at a Crystal Gayle concert", which makes it sound better.

It's not like I met George Bush, but I've only ever seen him, the top of Reagan's head when I was touring the White House in 4th grade and he was headed to the helicopter to go to Camp David, and one time Hillary Clinton got out of a car right in front of me on The Drag in Austin (circa Fall 1996).  That's it for me and bigwig politicians.  (I did attend the 1992 Republican Convention in Houston via a connection of my parents and saw Dan Quayle and George Bush speak - but I was literally in the second to the top row of the Astrodome and they were mostly only visible via screens.  I am sure I saw other GOP powerhouses, but can't recall who.)

Anyway - I genuinely believe George HW Bush was a very hard working president at a strange cross-roads in American history and politics, who has a great mind but lacked the showmanship of his predecessor and that made him seem less than he was at the time.  He also had an unfortunate tendency to try to be honest with the American people, who would really prefer to be lied to and do not want to hear that we can't afford to go to Disneyland this year because money is tight.  I was 17 and unable to cast a vote for anyone in the 1992 election when Clinton was elected, making Bush one of very few incumbent presidents to lose their seat (also the election that included Ross Perot, who would be wildly popular in today's climate, I expect).

But as VP, as President and as a retired man of the people who just really loved baseball - I'll miss him.  Y'all pour one out for Mr. President.