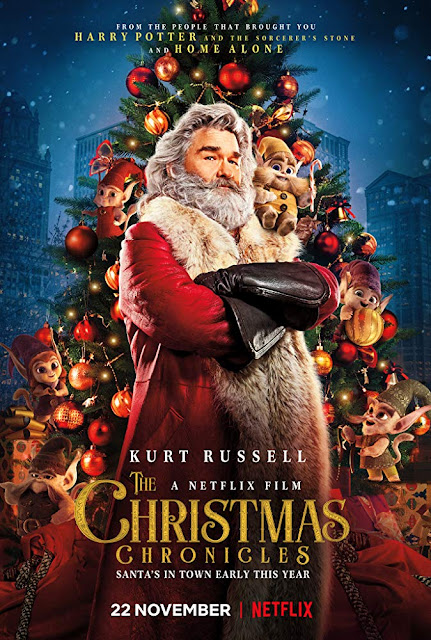 I mean, honestly, they had me at "and Kurt Russell as Santa".  Does Russell's participation immediately suggest "amazing film"?  No.  But he will elevate whatever he's in just by showing up, so I figured - hey, I already have Netflix, if it's painful, we turn it off.

I'm happy to say, The Christmas Chronicles (2018) is the rare Christmas movie that's actually pretty funny and accomplishes its goals in a surprisingly uncynical, actually-earns-it way.  All of which is remarkable, because describing the plot of this film will make you raise your eyebrow and say "I've seen this movie.  Several times.  And it's always terrible."


Basically - family in turmoil at Christmas.  Younger child/ daughter believes in Santa.  Older kid is cynical.  Santa shows up, they cause a problem with Santa's sleigh and spend the night helping Santa pull everything together so Christmas can be saved.

And maybe learn a little something along the way.

But, look... I'm about as sick of the "the way the North Pole reeeeaaaally works" type movies that make it a high-tech wonderland with elves riffing on Mission: Impossible style infiltration into living rooms.  And do we need yet another movie where a skeptical or troubled kid learns a lesson along the way while talking about the meaning of Christmas in loosey-goosey terms that never add up to much other than "a sorta warm feeling inside and not being a heel to your immediate family"?

Part of why we don't *really* like these movies is that they're so often so... bad.  I mean, yeah, I know the past two or three decades the bar hit the floor for media oriented toward "the entire family", especially once you inject Christmas into it, but I'm always amazed at how lazy the gags, how they go for the obvious "they'll love this in flyover country, right?" jokes, and the notion that merely referencing something else in a movie (see the above SEAL team elves) is something we all need to watch endlessly.  And, if it worked in that other movie, let's just do it here, too.

Pretty clearly, whomever was working on The Christmas Chronicles saw what they were working with and dared to ask - what if we tried?  Let's start with this boiler-plate plot - but what can we do to make it actually new?  Like, what if we started by intentionally not just imitating how this works in other movies?  Hired actors that were likeable?  Didn't just hire Little People for "elves"?  What if, when we went for a joke, we tried it on a human to see if they laughed?  And, better yet, get some actual funny actors in here and there to make sure we well it?

I'll be totally honest - a huge part of why this movie even begins to work is that Kurt Russell just plays himself and calls it Santa, and who wouldn't like that?  Add in that the character is not a blithering idiot when he meets people (he's Santa - he's got near omniscience and a pretty good understanding of what makes people tick) and it makes a whole lot more sense than a laughing idiot who get fleeced the minute he hits the streets of anytown USA.  And, deeply importantly, Santa's actually a magical guy, not someone relying on next century's technology.  Pile in Russell's good-natured but world-weary persona, and it's a new spin on an old idea.

And you can just sort of apply this across the board.  In a film genre where everything's been covered, they did seem to just start from scratch.  What is an elf?  What does it look like to travel in Santa's sleigh?  How does Santa get all those toys into a sleigh?  What actually happens if people "lose their Christmas spirit"?  It's a curious refresh - sort of like when you see someone's home re-done (well) and you didn't realize how much it could use all the rethinking.

Things that shouldn't work... do.  Santa finding himself with Steven Van Zandt bursts into song, and it's actually funny instead of "that sequence we're going to have to sit through".  The Elves are kind of charming.  A side-mission with the brother character getting wrapped up with some toughs is resolved quickly and efficiently rather than the usual drawn-out-but-predictable stuff that was likely in the first draft.

There is, as required, a chord of melancholy mixed in, as befits a Christmas movie.  Parents, be aware that there is a dead parent in the mix, and that this is a movie about a family going through the grieving process and the logistical difficulties of sudden single-mom-hood.  Where we start the movie and where we finish it actually kind of structurally makes sense.

The two kid actors they have in the movie are a comfortable sort of pretty-good.  No one is Disney Channel-hokey, and the pollyanna-ish little sister never feels twee or ridiculous.  (Well, maybe a bit twee).  But we also don't have any overly precocious "it's funny when a kid acts like a grown-up" gags thrown in.  No one is a revelation as young talent here, but I never grimaced or started hating the kid actors (which happens with enough regularity when I watch movies that I wonder how painful the process must be for the crews and/ or what is wrong with me).

As far as "I dunno, let's put on something we can all watch" Christmas entertainment, you can ALWAYS do worse than a Kurt Russell movie.  I don't want to oversell this movie, but I genuinely liked it and will likely rewatch it.  If we're going to get these "kids meet Santa, solve their problems" movies, this seems like a "best in category" entry and I suspect it'll stick around.

I loved this so much. Part of the fun watching it a second time was figuring out just which parts of the adventure Santa had planned and where things went a bit sidewides. I hope the generic title predicts new chapters, because this this could make a great yearly tradition.

Yeah, they definitely wrapped it up for this movie, but I think the set-up leaves the door wide open for more Kurt Russell Santa. I'd be happy to see Mrs. Claus get some real screen time, and whether it's a new family he's wrangling or same, sure! From the positive word of mouth I'm seeing, I'm guessing Netflix will want to get another installment, so here's to seeing. It did occur to me - there was a balloon of one of the elves in the Macy's Thanksgiving Day Parade - so I'm betting they didn't invest in that for a single installment for a one year thing - but, who knows? I feel like Netflix just prints money.