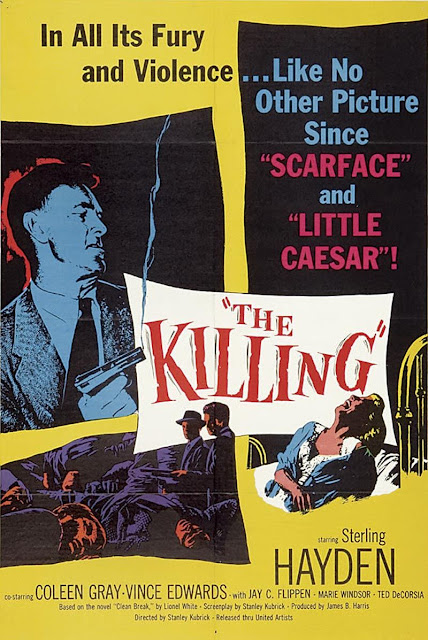 First of all, "The Killing" that occurs in this movie is not an assassination.  It could refer to about five or ten different things, and I suppose that's intentional.  I'd start with "they're gonna make a killing on this heist", but, of course, this is a 1950's-era heist movie, so you know it's not ending in sunshine and flowers.

The Killing (1956) sits on a curious edge when it comes to crime dramas/ noir.  Marking maverick, young filmmaker Stanley Kubrick's first foray into studio-backed cinema, the movie feels part and parcel of the noir movement with a structure and an ending not atypical for a dime-store crime novel, retaining those rough edges that some noir eschewed.  As much as I like The Asphalt Jungle and Rafifi - likely The Killing had more impact and reflects more of where the heist genre would go - especially in American cinema (at least marginally). 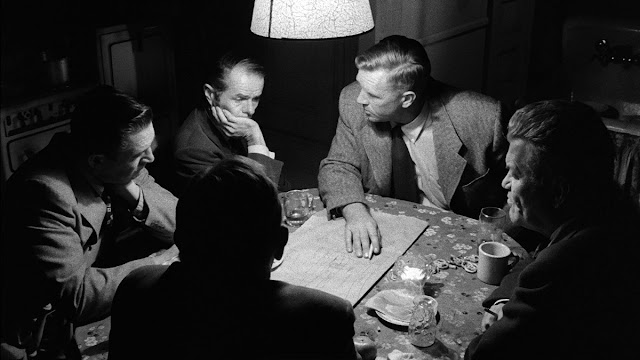 While the film certainly has leads, like The Asphalt Jungle (1950), there's an ensemble at play here, a bunch of self-interested, broken people teaming up to perform the seemingly impossible for a huge payday - one last, big score.  Those moving parts and their unpredictability generate a lot of drama as the clockwork machinery of the heist's plan unfolds, the foibles and baggage they brought with them something of a powder keg each character sits upon, threatening everyone and everything. As the film's lead, Johnny Clay (Sterling Hayden at his Sterling Haydenest) says: None of these men are criminals in the usual sense. They've all got jobs. "They all live seemingly normal, decent lives. But, they've got their problems and they've all got a little larceny in 'em."

Like a lot of noir, Kubrick's team didn't cast for beauty when it came to his male characters (I dunno. Maybe Timothy Carey is someone's dreamboat.), pulling faces and talent from the past decade of what Eddie Mueller is calling "The Noir Movement" - which defines what was going on better than an instantly-minted genre.  Jay C. Flippen has a face of world-weary loser, and he carries the weight of his character's code-compliant closeted older man with a painful desperation.  Ted De Corsia is an ideal corrupt cop on the make.  Joe Sawyer as bartender with bills to pay and a sick wife he wants to care for.  And of course there's the colorful characters like Maurice the heavy (played by Russian Kola Kwariani) and Tim Carey's sociopathic sniper.

There's also a young handsome hustler and his spooky sidekick (played by a young Joe Turkel of Blade Runner fame) who get involved thanks to that most noirish of dames - a blonde (I KNOW) Marie Windsor, a money-hungry grifter who married the wrong guy and has fallen for the out-of-his-league hustler.  She's the wild card in the deck, and when Johnny catches her trying to cut in:

Sherry Peatty: You don't understand me Johnny. You don't know me very well.
Johnny Clay: I know you like a book. You're a no good, nosy little tramp. You'd sell out your own mother for a piece of fudge; but, you're smart along with it. Smart enough to know when to sail and when to sit tight and you know you better sit tight in this case.
Sherry Peatty: I do?
Johnny Clay: You heard me. You like money. You got great big dollar sign there, where most women have a heart.


Even when Windsor doesn't get the best dialog in a movie, she sells the hell out of it, and The Killing provides her with absolute gold on the page.

Johnny Clay: You'll have money. Plenty of money. George will have and he'll blow it all on you, probably buy himself a five cent cigar.
Sherry Peatty: You don't know me very well, Johnny. I wouldn't think of letting George throw his money away on cigars.

I've heard they delayed start of the film so Windsor - who was "Queen of the B's"-  could finish something called Swamp Women and come in to play Sherry.  Hats off to Kubrick, because while I can imagine a few other dames in the role, none of them would have brought what Windsor does in casual, heartless malice.

She's cast against everyone's favorite noir stressball, Elisha Cook Jr., playing the guy who talked big about what he would buy her if they got married and knows this woman who was always out of his league is ready to walk. 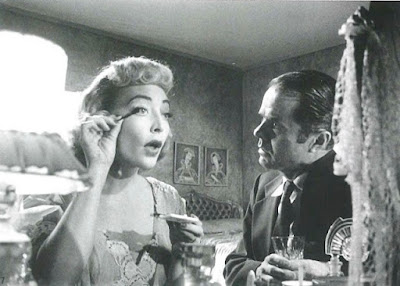 The unlikely pairing works tremendously well on screen visually, but the shared scenes between the two are just devastating for poor George.  The pleading, desperate rag of a man trying to contain a razor tongued jungle cat, figuring her next move is some tightly scripted, next level stuff and a domestic nightmare.

If Windsor's attempts to flirt with or seduce Johnny Clay don't pan out, it's because all Clay wants is to get away with his childhood sweetheart, played by Coleen Gray who - unfortunately - get's the movie's only false note declaring herself "I'm not pretty and I'm not very smart".  Cough.

Hayden himself gets to play a sharper character than in some other films, and his dialog is rat-a-tat perfection.  He's a no-nonsense engineer with this stuff, and I have my suspicions that he's more or less the model for Parker in the first 3-4 Parker novels, especially as described by Stark in The Hunter ( I am planning to get and read The Snatchers, which is the book this is based on, by Lionel White, to see what's what).  As all good project managers know, the point of the solid, well-defined project plan is to deal with the inevitable complications and manage those complications - but in heists as in software, things tend to get away from you when fate tips her hand.  And I think Hayden's ability to not unravel and try to remain resolutely on course is something unique to the sub-genre of the heist picture.

Structurally, I'd like to work the numbers for what time heist films get into the business of the heist, and what percentage of the film the the heists comprise.  Rafifi, Asphalt Jungle and others probably don't vary wildly.  There's always the set-up, the heist and the fallout.  You can trace this is different ways across crime novels of the preceding era that Hollywood adapted into movies after WWII.  And, in fact, it's interesting that the Noir/ crime drama movement occurs in the post-war era when the books were a reflection of the Depression and the real-life anti-heroes of their era like Dillinger.  Of course, by something like the Parker series, you have Stark playing with format, including The Hunter, which is 100% fallout from the heist.

Kubrick's film plays with a lot of things, technically, stuff audiences might now take for granted, especially if you're a fan of the Ocean's 11 films.  This movie manages to show a lot of events that are occurring simultaneously, in a sort of cascading order so you can get the outsider's perspective and back to Johnny Clay's POV, as well as others.  The studio forced some incredibly heavy-handed narration on the film to keep the flow clear to the viewer, and I'd be curious to watch a cut that removed the cues.

One of the bits I like in the movie is how trying to deal with squares and normal people grinds the gears for the film - from the size of a bag one can bring on an airplane to the deeply uncomfortable but notable scene between Tim Carey and James Edwards - a Black parking lot attendant - and how unspoken racial rules of 1956 play a huge part.  Not to mention the appearance of the n-bomb on screen during this era, made all more vile as spit out by Carey.

When I mentioned online that the film was airing, Gerry mentioned the camera work.  And, yeah - typical Kubrick - it's terrific, edgy-for-the-period stuff.  Handheld work, moving camera across an apartment to track people through rooms (which he was still doing in Eyes Wide Shut), playing with shadow and focus.  What's interesting is that the cinematographer's filmography is otherwise sort of non-impressive.  Mueller mentioned in his bookending of the film that Kubrick, who had shot his own movies twice prior to this and came into film after working as a photog for Look magazine, basically drove the DP crazy and eventually just grabbed the camera himself to get a few shots the guy wouldn't do.

There's plenty more to discuss in angle-choice, obstructions between the lens and the subject, etc...  but I encourage you to just check it out for yourself.

As in many heist films, it doesn't matter if you're the best kid in Sunday school, you'll find yourself cheering for a guy pulling a shotgun on hapless money-counters, the desire to see him make good his escape (which, thanks to this being a Code-era film, you know won't occur).  The alchemy of the film is tremendous, and while Huston's Asphalt Jungle may work like a poetic morality-play, and Rafifi play into post-war European nihilism, the gritty, tangible drama and odd combination of parts and Kubrick's understanding of how to plug them in just right - we get something new and extraordinary that film after film has tried to recreate.