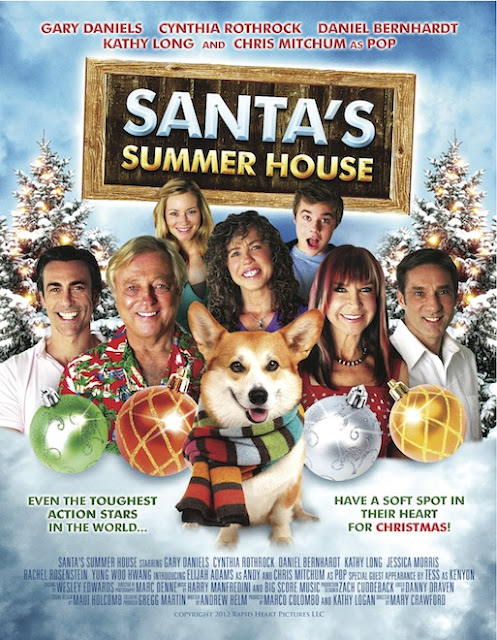 Finally, a movie that raises infinitely more questions than it answers.

Let's start with foundational queries (that we will never answer):

What is this?  Why does it exist?  Who is this for?  How did it happen?


I have no idea what it is about Christmas that seems to lower the bar for movie-making, but I suspect that there's really just this level of content being produced all the time and it just doesn't make it onto anyone's radar.  Because Rifftrax needs something to riff and because the rights are probably highly available, each Christmas when my brother-in-law visits, we watch one of the seemingly endless horrendous offerings that somehow the Christmas season inspires.

This year's Rifftrax offering was something called Santa's Summer House (2012), a shot-on-camcorder feature-length...  thing? that stars no less a talent than Cynthia Rothrock as Mrs. Claus.  Which... I'm not sure seeing Cynthia Rothrock do anything but kick people in the head was something my brain could understand, but he's not a bad actor.  Here, tho, she's mostly just stifling laughter as she makes her way through whatever is happening.  And wearing red.  Because Christmas.

The "camerawork" is just... someone maybe sitting in a chair or on a stool shooting over the shoulder?  Sound is a microphone just capturing ambient audio.  We debated and came down on the side of the idea that there was a script with lines, because there is a story of sorts.  But the acting feels like bored community theater actors doing a single take on every scene and moving on to whatever was the next "set up".

There are two name actors in the cast - the aforementioned Ms. Rothrock, and the son of movie legend Robert Mitchum, Christopher Mitchum - who is more "famous by proxy" than "actually famous".  And it includes the guy who played "Ken" in Fist of the Northstar.   And former martial arts superstar Kathy Long who has been in movies in various capacities.  All people who know what a set looks like and how movies work, and yet... they stuck around to see the movie to completion.

I mean... the director is listed as "Mary Crawford", but is actually David DeCoteau.  And I have no idea how this works, but he has 12 movies on his resume from 2012 alone.  Some of those projects are competently produced TV films for the Hallmark Channel or whatever.  A bunch look like direct-to-video stuff.  I get that there's an industry of would-be-Cormans making stuff on the cheap, but...

where was this movie supposed to show?  And why would they make it?  Who would pay for such a thing?

The plot is that Santa Claus magically tricks six people into winding up at his Summer house so he can grant Christmas wishes he was unable to fulfill for them in younger days.  Now he's fixing marriages, setting up romantic relationships and encouraging a caterer to take a chance on her terrific work as a photographer (this is a mistake).

No one makes content for Rifftrax specifically - and God bless whomever had to watch this thing more than once to make the episode.

So - seriously, WTF?  What IS this?  It didn't look good enough for any sort of TV distribution in any era, and seriously looks like it was shot in about 3 days.  It's a movie that posits that a clean-shaven Christopher Mitchum looks just like Santa (I have no idea what this means), and which asks Mitchum to bellow "ho ho ho", which he somehow can't find anywhere in his actor's toolkit.  Oh, and it takes place in Southern California in the middle of summer.

As near as I can tell, the "movie" is some sort of scam.  Like - they knew they could get some names on a box and in a listing, add Christmas stuff to the name and had channels for distribution.  No refunds.  If they made it cheap enough, no matter how few they sold, they'd still make some money.  But, again, watching the movie is like just pushing in your eyes with your own thumbs.  But less fun.

I will deeply recommend the riff, but be aware - this is one of those subjects they pick that just leaves you feeling exhausted, depressed and dumber for having watched to the end.  Still, glad Ms. Rothrock was having some fun.
Posted by The League at 12/27/2018 12:33:00 AM