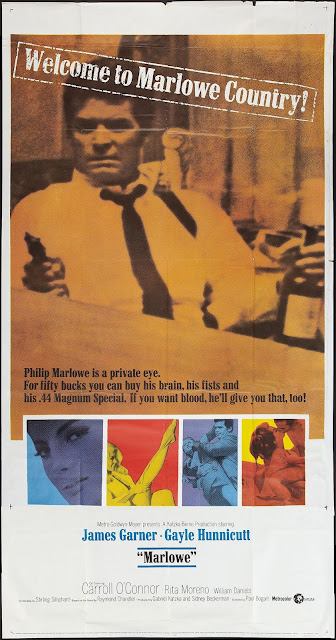 
In brief - Marlowe is hired by a young woman with the bizarre name of Orfamay Quest - come to LA seeking her brother, Orrin, but who has gone missing.  She's a real pill, but money is money, and as Marlowe goes to find the brother, he jumps from fleabag hotels to mixing with Hollywood up and comers (and has-beens) while also running across the mob and a fiendish doctor.  It's a lot.  Marlowe is beat-up, drugged, threatened by crook and cop alike, etc... typical Marlowe type stuff.

I'm aware of the deep adoration for James Garner and The Rockford Files, a show I've not watched since the mid-90's, but between the light tone of the directing (and near made-for-TV look of the movie), and Garner's good-natured approach, I'm not sure it works, exactly.  Powell's Marlowe seems driven by a certain "need to know", and Bogart isn't entirely dissimilar - a sort of drive to uncover whatever mess into which someone drew Marlowe (and add in Bacall, and you've got all the more reason to sort things through).  But Garner never quite feels like it makes sense that his Marlowe doesn't just throw in the towel after the first act.  After all, he's not getting any money and it all seems like a lot of trouble that doesn't concern him in quite the same way that Marlowe gets invested in the novel, just sort of having to know what the hell was going on.

The movie has some surprising co-stars all at various points in their career.  It's 1969, so Bruce Lee shows up as a mob enforcer trying to throw Marlowe off the trail.  And it's pretty clear someone just wanted Bruce Lee in the movie - and who could blame them?  But they didn't think it through and Lee is dispatched in the dumbest way possible.  I mean...

Carroll O'Connor plays the long-suffering police lieutenant whose life would be genuinely better if Marlowe would just share some details (and the movie doesn't make a great case for why he doesn't).  Kenneth Tobey, a sci-fi and b-movie fixture turns up as his partner.  Jackie Coogan (who is nowhere as cute a middle-aged man as he was a kid) one of the movers and shakers Marlowe is dealing with.  And a handful of talent that mostly existed in context of TV guest appearances and brief runs on TV series of the 70's.  The exception being William "voice of K.I.T.T." Daniels, who is always great.

Fortunately, the movie also co-stars Rita Moreno in a secondary but deeply important role, whose function remains essentially the same as the novel, but the incendiary sexiness of the Dolores Gonzales character of the book (modeled, I think, more after Lupe Velez than Dolores Del Rio) is rechanneled from bisexual nymphomaniac to sexy showgirl who shows a surprising amount of skin for what otherwise seems like a TV ready flick.*

But here's the thing: Moreno is so, so much better than her other two major female co-stars.  I can see why she was drawn to the character, and what she did with it (and, hey, they asked her to dance), and I guess, as we say, there's nothing wrong with wanting more of something in a movie.  She's just on a whole other level here that reminds you why she's still working where others faded.

While serviceable, it's nearly impossible to imagine this version of Marlowe making the jump to The Long Goodbye or even Playback.  The film basically feels like a very long Rockford Files episode in how it's shot (unimaginatively) and how it handles it's mysteries and characters.  The LA and Hollywood of the movie are barely there - and in the "control room" sequence where Marlowe discusses the case, there's, I believe, a Garbo movie on, seeming to suggest something about Marlowe's old-fashioned-ness.

I don't exactly question where the notion comes from that Marlowe is a knight in dingy armor, but this movie, in particular, plays up the idea that Marlowe is constantly rescuing helpless females and is a throwback to a more chivalrous mode.  But Chandler's women are rarely so helpless or clueless as this film spins them, and I wonder if this film had more impact than I realized.

Curious bit of trivia - this movie alsof features two LA locations used in Blade Runner.  Marlowe's office is located in The Bradbury Building and the LA train station shown in the film doubles in Blade Runner as the lobby of police HQ that Deckard passes through in the first few minutes of the movie.  Both seem like part of some hand-waving to connect this Marlowe to the one of the novel, LA staples from an earlier era, even in 1969.

Mostly, this movie makes me wish Amazon Prime, HBOmax or Netflix would just find a Marlowe and make a series of straight adaptations of the Chandler novels (there aren't that many), set in the eras in which they were released.  The stories can absolutely handle a 20-year jump to update them, possibly a 70 year jump.  But setting them in their contemporary periods would keep the filmmakers from scrambling to find updates and making unnecessary changes.

Anyway, these days, it seems more likely than not to actually happen in one form or another.