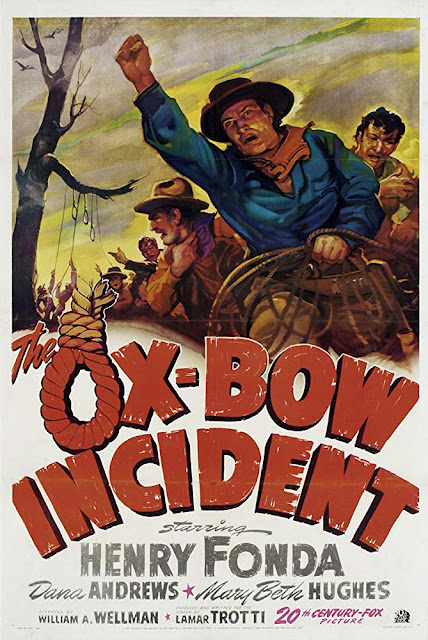 Well.  Between this and The Lost Weekend, I picked quite the double-bill for the weekend.

I mean, I knew.  I'd rented this movie twice in college but when I'd think about what it was about, I'd never hit "play" on the ol' VCR.  And I'd recorded it a half-dozen times on the DVR and never watched it.  But this time I did.

The Ox-Bow Incident (1942) is about a small town in the old west who finds out that a local rancher has been killed, and so they pull together a posse to go track down the killers.  It's a mish-mash of local color and yahoos, rationalizing why they don't need to follow the rules, exactly, and supported by the ineptitude and slack nature of some local authority.


And, of course, they're looking for someone and they find them.

Henry Fonda plays a ranch-hand alongside Harry Morgan who is first eyed as a possible suspect and then rides along with the posse.  It's 1940's-era Henry Fonda, so you know he's the conscience of the group, even if he's not the one most familiar with the law.

Dana Andrews and Anthony Quinn (playing as a Mexican? Man, pick an ethnicity, Quinn...) are some of the men discovered by the posse.

It's a great script and well-played, a call out against mob-mentality and the vigilante justice often embraced in American cinema then and now.  But in 1943, it's not as if America wasn't seeing mobs and lynchings.  If the film achieves anything, it's the clear message of why we have a justice system, that we can't know everything in the heat of the moment, and our desire for swift justice and retribution provides neither.  And, in fact, makes criminals of us all.

It's not a cheery film, and in its brief run time, manages to work more as fable or homily than as a narrative - and that's okay.  That's what the film set out to do.

I'm somewhat surprised the film wasn't one that made it's way into more classrooms as an illustration for high school civics classes as to why we have a judicial system.  And, speaking honestly, as counter-programming to today's cable news and internet pundits who are ready for execution within minutes of hearing of a crime.