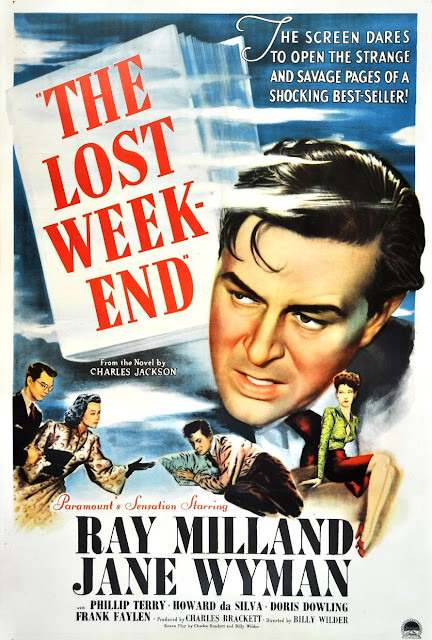 The Lost Weekend (1945) is one of those movies that you always know you should watch, but when you know what it's about, it's sort of hard to get fired up to put on.  But with Billy Wilder behind the camera and with a "co-written by" credit, it did nudge me toward "okay...", and knowing it featured Ray Milland, whom I like well enough, and Howard Da Silva, whom I really like, it put it in the "yeah, I need to see that" direction.

But in the past month two things happened.  (1) I read that Wilder wrote the movie after working with Raymond Chandler to write Double Indemnity.  Chandler certainly suffered from alcohol addiction and, as it will, the addiction impacted his professional and personal life.  I'm unclear on whether Chandler was dry during Double Indemnity, but I'm also sure working with Wilder would drive him to drink.  While the two never got along, it's noteworthy that whatever he saw and respected in Chandler was mixed up with how he saw his alcoholism.  (2) Our own JimD referenced the movie and asked me when the last time was that I'd seen it, which was "never".  Mid-tweet response I decided to watch the movie this weekend.


The film follows Ray Milland as one of two brothers about two leave for a weekend in the country (from NYC, of course).  He's hiding a bottle on a length of nylon rope outside his window, but telling his brother he's been dry for a bit, which is discovered.  When his girlfriend (Jane Wyman) stops by en route to the symphony, he talks them into starting out later for the country and then slips off to catch a drink.

His brother goes ahead and leaves him, frustrated after years of covering for and looking after the drunk, leaving Milland to his own devices til Monday evening.  Immediately, things begin to spin out of control.  We do get a flashback in the form of Milland telling the barkeep (Howard Da Silva) about the Great American Novel he wants to write, or, at least see how he and Wyman met.

The movie pulls no punches, detailing the everyday deceit, double-talk and exploitation of the goodwill of loved ones.  But also the charm and warm personality in the early stages of the bender, and the illusions one can labor under about how the booze is helping.  And for those who aren't fully aware, such as a barfly/ hooker who frequents his favorite watering hole, he can still do no small amount of damage.

But, damn, is it an uncompromising film for the era.  By the time we hit Leaving Las Vegas, us Gen-X'ers had grown up with TV movies of the week about alcoholism, Just Say No campaigns, etc...  and maybe weren't jaded on the topic, but had been trained to see the signs and given some tools for how to talk about it.  But in 1945, this sort of discussion wasn't for polite society, and alcoholism might, at best, find it's way in as a b-plot or something easily cured if someone found pluck or the right motivation.  The Lost Weekend never fools with any of that.  There's no easy outs.  And we get a picture of both how the addict and their loved one's suffer - Jane Wyman's character is, perhaps, too much a saint (you do want to shake her a bit and remind her NYC is full of men who aren't living at the bottom of a bottle).

Milland deserves whatever accolades were bestowed upon him from the film (he won Best Actor at the Oscars), playing all the sides and still making his writer understandable if not always sympathetic.  And the rest of the cast is pretty great as well.  I'm not a huge Wyman fan, but she does well here, Howard Da Silva is Howard Da Silva (that's a positive) and I loved the barfly character played by Doris Dowling.

Terrific, moving film.  Maybe not a first-date movie, but worth catching.  Not just for the material, but the performances, direction and film-making itself is all remarkably effective.  I've seen the movie listed as "noir", and I had the passing thought.  Maybe.  I'll tag it as such out of deference, but this is not people making bad decisions because they like the way a leg looks under a skirt or because they think they can make some dirty money.  Still, the results are much the same.  Compulsion, desperation, people at the end of their rope.

I'm curious to find whatever Wilder had to say about the film vis-a-vis Chandler, who would put his own spin on alcoholic writers in the amazing The Long Goodbye.  But in the end, having this movie out there - which won the Academy Awards for Picture, Actor, Director and Screenplay, as well as winning Cannes - may have done the world some actual good.  Having a film to point to and discuss gives people a shared language with which to take on certain topics.  And while alcohol addiction is depressingly common (we've all got someone in the family), we need ways to discuss it and not hide it.  AA had been founded just 12 years prior in Akron, and wouldn't lock in the 12 Traditions until 1946.

I'll just say I'm not surprised that the phrase "Lost Weekend" is still in the parlance.