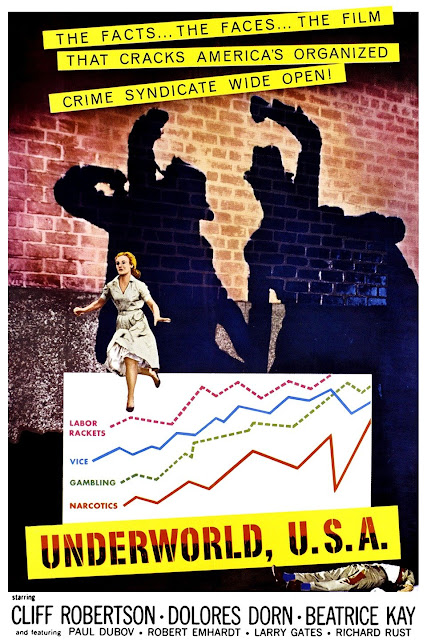 
Circa 1943, a tough kid, Tolly, believes his two-bit hood of a father is the greatest, missing out on how he'd neglected by his father but cared for by Sandy, a local bar owner.  On New Year's Eve, he and Sandy see his father get killed in an alley, but they miss who did it in the dark - except for one face.  With revenge fueling him, Tolly goes in and out juvie and jail until he lands in prison with the guy he knew he saw.  The guy is on his deathbed, and afraid of Tolly, tells him who the other killers were.

Tolly is released and, in trying to get at one of the hoods who killed his dad - now a high-level mobster whose name is in the paper, but he's still untouchable - rescues a hooker who is trying not to become a carrier for the narcotics wing of the gang.  The tale is winding, but he goes undercover on his own, getting close to get inside and figure out his path to revenge, even as he's keeping the girl, "Cuddles", at Sandy's house.

It's a tough movie, made tougher by a sort of oddball and unusual role for Cliff Robertson (y'all know him as Uncle Ben in Spider-Man), who normally played nice-guys.  But Tolly isn't a nice guy - he's a mess and he's eaten alive by the desire for revenge from the moment he sees his father killed to his release from jail at 32 and with the knowledge of who killed his father.  It's a twitchy, sweaty performance where you can feel the guy is a contained set of nerves and hasn't had his head on straight a day in his life.  It's a weird one for Robertson, and maybe overly studied, but I liked it.

Doris Dorn, who plays "Cuddles," is fantastic, honestly.  And Fuller knows how to make female characters interesting in his own, smash-mouth way.  She and Beatrice Kay, who plays Sandy, have the best characters in the movie - but they're also part of/ used up by the world in which they exist.  Cuddles has a lot of mileage on her by the time we meet her as a hooker being turned into a drug mule, and gorgeous but dressed for the part of a hustler.  Sandy has served drinks to these hoods and gained off them, but her life never took off- she never got the child she wanted, and Tolly is a disappointment of a substitute.

Tolly is verbally abusive to both, unaware of his own actions in his self-interested machismo.  Look, Fuller is as unflinching a director as you were going to find in this era in the studio system - this is pulp, yeah, but Fuller's work predates and informs what would come later - his hooker with a heart of gold isn't glamorous and isn't pined after or treated with kid gloves by our heroic lead.  And, in fact, Tolly says some of the cruelest stuff I can remember a character saying to another in a noir.  Sandy, meanwhile, is the least screwed up person in the cast, one of Fuller's older women who anchor his films.

Fuller's willingness to keep the edges on his characters and not flinch when they're at their worst makes for the kind of storytelling we seek out now in edgier TV shows and movies in 2020, but has to do so creatively and coded to exist within the studio system.  He would break free and produce films like Naked Kiss soon enough (one of maybe three films that have gotten me to involuntarily audibly comment during a film) - but, man, I love Pickup on South Street.  And now I love Underworld U.S.A.  There's probably a wealth of pop-psychology to apply to that for me as a viewer, so go nuts.

But I think there's a greater honesty to even fictional characters in Fuller's films than in many  - the glamour of Hollywood is non-existent. And there's room for performances you don't usually get to see.  I don't unduly take pleasure in worse things happening to imaginary people, but I do appreciate the attempt to capture something that digs a bit deeper than stock characters and winding plots.