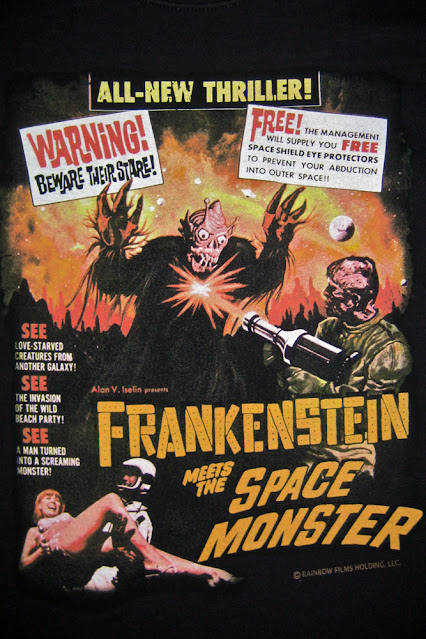 Watched:  10/13/2020
Format:  Amazon Watch Party
Viewing:  First
Decade:  1960's (and how!)
Director:   Robert Gaffney
Jenifer picked this particular gem for our Tuesday screening, and it was a g-d delight.
For reasons that are never explained, NASA creates a sort of synthetic man they want to launch into space in place of an astronaut (we are all fine with automation in our space probes, and I'm not sure why the ruse is necessary).  He doesn't actually work very well, but they go ahead with the plan.
Meanwhile, aliens from a distant world that has experienced a wave of self-destruction via nuclear exchange have come to Earth in a space ship roughly the size of a small house, with plans to steal our women - because they have none.  Except for their leader, a sort of imperious-but-fun Space Queen (Marilyn Hanold) in a heck of a pant-suit and head dress. 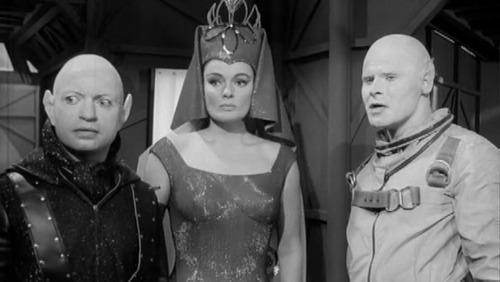 The aliens (who constantly explain themselves via exposition delivered via Dr. Nadir) knock the rocket out of the sky and it lands in Puerto Rico, where the aliens also go in order to kidnap women.  From a poolside party.  (I should mention, mostly the aliens are under helmets, but when they do show them, they all have evolved to look like they're wearing badly applied bald-caps and iffy rubber ears.)
NASA deploys scientists to go retrieve "Frank", their biomechanical "Frankenstein", who gets injured/ shot in the face and spends the rest of the movie a shambling mess.    About half-way through the movie (I'd estimate 1/3rd of the first 1/3rd of the movie is stock footage) I realized the lead male scientist is a young James Karen and kind of flipped my lid.  The other scientist was played by Nancy Marshall, who had sort of a weird relationship with "Frank" - it's not clear if she just really cares about him, was in love with him, thought of him as a child or what.
Anyway - it's clear everyone working on the movie was having fun in Puerto Rico, especially James Karen and Nancy Marshall, who get to just ride around on a moped in San Juan, looking around.  It's good, goofy fun, and I was stunned to read the producers thought this was a straight horror film.  It feels like a campy goof, so even if that wasn't the intention, it works like crazy as a campy goof.
Oh, also - I have no idea WHY the aliens have their spacemonster on board.  It's like getting in a Winnebago with a live tiger and thinking "yup, this makes sense".
As a mid-60's film, it's got a rocking soundtrack, a whole lot of prior sci-fi and horror to steal from, and a plot where "sexual slavery" was a thing (and the girls don't seem all that phased), is just par for the course.  The real footage from NASA inserted into the film is a reminder of what an amazing age that was in many ways, and the movie is certainly hoping to steal some of that thunder. 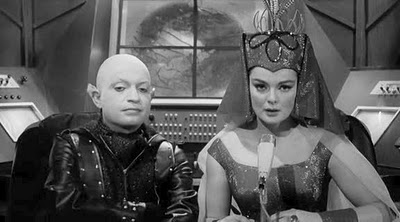 Really, my favorite part was Playboy Playmate Hanold riding around with what I was reading as her gay pal as they went on a roadtrip and didn't give a damn about the locals. I mean, read the movie how you want to, but that was my take-away.
And, extra special for Halloween, it turns out Hanold was this pin-up:
which you probably remember as this: