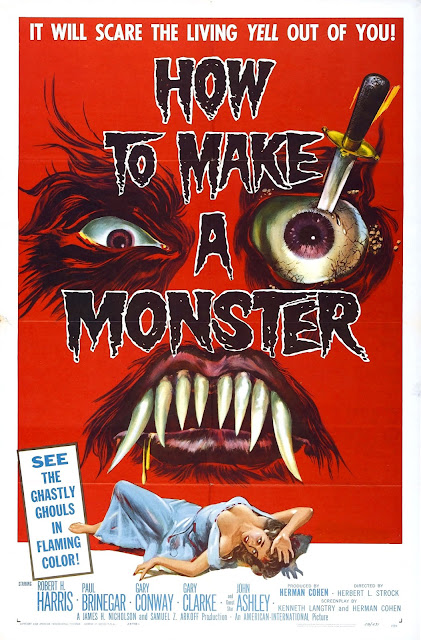 Watched:  10/06/2020
Format:  Amazon Watch Party
Viewing:  First
Decade:  1950's
Director: Herbert L. Strock
How to Make a Monster (1958) turned out to be a surprisingly watchable bit of borrowed-thunder schlock from American International Pictures, an indie studio that knew Universal couldn't copyright wolf men or frankensteins and really focused on the hep teens as an audience.  You know they loved the kids because a character, just at the far end of middle-age, literally monologues for a minute about how great "teens" are, just sort of out of the blue.
On the heels of I Was a Teenage Werewolf (an early Michael Landon film) and I Was a Teenage Frankenstein, I guess AIP decided to do some metacommentary and, thus, How to Make a Monster is about how monster pictures are no longer the cool thing, daddio, so our aging movie-monster specialist is told that after this last movie, he's being cut loose.  See, new producers just bought the studio and they basically want to make singing and dancing pictures (a real eye for the future, these guys).
The make-up specialist has figured out that a formula he's been working on for make-up application has a hypnotic quality, and he uses it to get the teens he's so fond of to start murdering the interloping new bosses.
There's plenty of 1950's B-movie hijinks, some deeply questionable decisions, and a seemingly stable make-up artist who has a whole different scene going on in his private life than you'd have guessed.
I am unsure if the movie is trying to comment upon the career of Jack Pierce, famous for the creation of Frankenstein's monster, the Wolf Man, the Mummy and others - who was ousted in 1946 from Universal.*  After all, the movie is about a make-up artist who created wolfman and Frankenstein monsters and who is let go as new studio brass comes in and wants a change in tone for the studio.
Jack Pierce didn't go on to murder anyone that I know of, nor was he a master of mind-control, and finished his days working on Mr. Ed.  It's really been the rise of the Rick Baker's of the world who discussed Pierce that means he's discussed today among make-up nerds.
It is not clear why the villain needs to put on full make-ups in order to get his minions to kill people, or why he puts recognizable make-ups on them, but the effect is something else as the poor kids run around strangling business guys just going about their own business.  Nor is it clear why the make-up man doesn't clear out to give himself a better alibi, rather than waiting around while the murders happen.
But, all in all, a cheery little horror movie that abruptly goes into color in the final reel, making for a jolting effect that feels almost surreal.
*there's a whole weird chapter of Hollywood make-up history that includes a near mafia-like relationship between the Westmore family and all of the studios.  The Westmores basically took over make-up across LA in the 40's and 50's, and were jealously protective of their reputation.  In some ways, the relationship continues to this day with SyFy's Face Off monster movie make-up contest - a product of the Westmore family.  Some of this, I believe, is covered in the recent Lady From the Black Lagoon book, which describes the sidelining of Millicent Patrick as a designer for the Creature from the Black Lagoon.
Posted by The League at 10/13/2020 11:30:00 AM