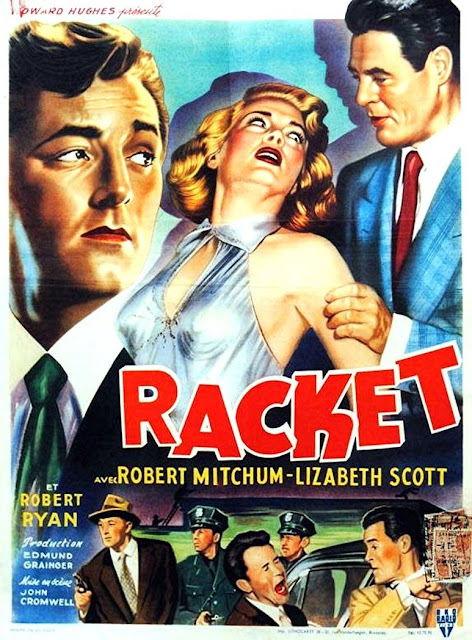 Watched:  10/13/2020
Format:  Noir Alley on TCM
Viewing:  First
Decade:  1950's
Director:  John Cromwell, Mel Ferrer...(uncredited), Tay Garnett...(uncredited), Nicholas Ray...(uncredited)  Sherman Todd...(uncredited)
Part of the "tough, straight-lace cop goes up against the mob" noir genre that crescendos (for me) with The Big Heat, The Racket (1951) sees Robert Ryan cast as a mob boss who came up the ranks thanks to his Capone-like ruthlessness who now realizes that by joining a combination that's moved into town and absorbed him - he's getting sidelined.  And in his business, that can mean a pine box.  Ryan's opposite is Robert Mitchum, a guy who grew up in the same neighborhood as Ryan, but found satisfaction on the side of the angels.  before we see him, we know he's paid the price for not playing patty-cake with the mob -  passed over for promotion despite his success and pushed to yet another district.
There's no small amount of politics, graft and corruption, and Ryan's to-date clean record (bought via a line of pliable judges) is still holding up, but his desire to remain top dog in his town is leading him to recklessness - including deciding to put out a hit on a would-be judicial candidate.  Mitchum takes the indirect route to Ryan, picks up his brother, which brings the brother's songbird ladyfriend into the picture - here played by noir icon Lizabeth Scott.  There's also an amorous reporter who is awkwardly guileless for the profession he's selected, and William Talman plays a cop trying to live up to and follow in Mitchum's footsteps.
Also look for a young, The Killers-era William Conrad playing a role 20 years ahead of its time and "that guy" actor Ray Collins as the scumbag politician.
The film is an RKO picture, and on the tough side.  Even our good-guys play a bit fast and loose with the truth when they know the mob is using the law as a blunt instrument.  People throw punches with minimal provocation.  Even the virginal housewives (Joyce Mackenzie and Virginia Huston) have to deal with death and their foyers exploding.  Cars don't just crash, they flip.
If you're a Mitchum or Robert Ryan fan (and I am), then that's enough.  RKO spent some money on this one, if not a ton of money, and the performances, dialog and stakes work well enough to gloss over some rockier aspects of the story.
It's interesting to see Lizabeth Scott cast as more of a free-agent than the love interest of a main character.  Yeah, she's pursued by two characters in the film, but when her character speaks to Ryan and Mitchum, it's not through the filter of a romance - she's just laying down the truth, man.  She's pretty good here, honestly (she's never been my favorite of the noirista favorite dames), but credit where it's due.  I think she's terrific as an end-of-her rope songbird who couldn't believe she'd stumbled into a little luck in romance and possible financial security (those post-Depression notes just don't show up in movies anymore as a motivator, and they should).
This is an ancestor of tough guy cops and robbers movies that we're still enjoying  - although after Heat, I'm not sure anyone is bothering anymore.  It's got that visceral appeal of an RKO noir, and doesn't put a shiny veneer on anything.  And, honestly, probably hews closer to a version of the truth than we want to think about as more than a fun crime story. It won't make you rethink cinema, and it's not the best even in it's sub-genre, but it's a solid production despite multiple writers and 4 directors (that we know of).
Posted by The League at 10/14/2020 11:22:00 AM