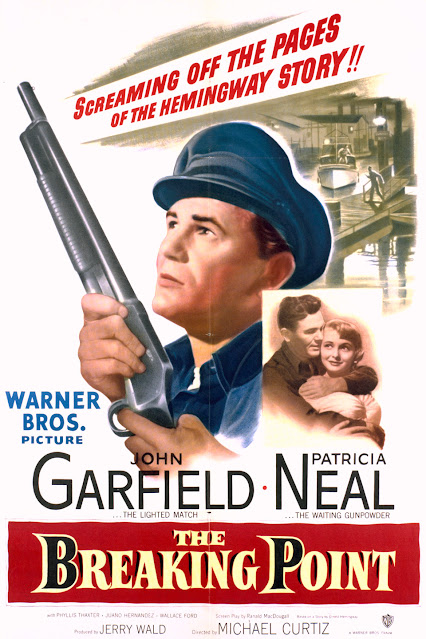 Watched:  01/28/2021
Format:  Noir Alley on DVR
Viewing:  First
Decade:  1950
Director:  Michael Curtiz
Based on a Hemingway novel I haven't read,* To Have and Have Not, The Breaking Point (1950) stars John Garfield, Phyllis Taxter and a smooth as hell Patricia Neal - all under the direction of the great Michael Curtiz.
I honestly thought I'd seen this one, so I let it sit on my DVR - but I hadn't.  It bares very little resemblance to the film that borrows the novel's name, the famed Bogart and Bacall vehicle, which I recommend.  You could double-bill them and it'd be an interesting ride.
As I understand it, the movie strays from the novel in several key ways, but as a noir - it fits perfectly when it comes to theme and occasionally dabbles in the look and feel, which is a tough sell when you have a lot of daytime story on boats and piers.  But.
Garfield plays the captain of a fishing charter who, paired with his pal Wesley (Juano Hernandez), is scraping by in tough times.  They pick up a wealthy client who ditches them and his lady-friend, Patricia Neal, in Mexico without payment.  Forced into a corner, Garfield agrees to take on a group of Chinese immigrants to smuggle into the country - but things go poorly.  From there, things just keep escalating.  Because: noir.
As a noir, it fits like a glove.  Our character is forced into a corner, gets in over his head doing something he doesn't want to do.  Neal isn't a femme fatale, but she's a fascinating distraction and her appeal demonstrates Garfield's duality, when he has Phyllis Thaxter at home, offering love, support and a way out.
Honestly - it's just a damn good movie, surprisngly progressive with some of its characters, and has maybe one of the gut-punchiest endings I can remember seeing in a movie in off TCM in a long time.  The themes are absolutely universal/ timeless.  Garfield is so *human* in the film, his driving insecurities and stubbornness in the face of reality so relatable (at the expense of the people who love him), it's a remarkable feat of story, script, acting and direction.
Highly recommended.
*I've only read a smattering of Hemingway, but I don't have time for the "he wasn't that good" chatter the kids are so fond of. Your inability to relate to any fiction where people don't have access to a television that is not YA fantasy is not my problem.
Posted by The League at 1/29/2021 03:03:00 PM