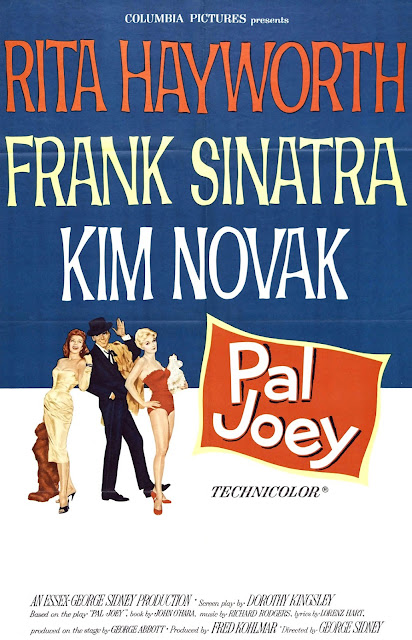 Watched:  01/26/2021
Format:  TCM on DVR
Viewing:  First
Decade:  1950's
Director:  George Sidney
So, sometimes you watch a movie and it doesn't work out.  I did take a note that this movie, on paper, seems to have everything going for it, but it isn't well remembered.  Which, you know, can often mean something.  Starring Frank Sinatra, Rita Hayworth and Kim Novak, and from George Sidney who has a list of quality directorial credits as long as your arm, it shoud have been a cinch.  But.
Pal Joey (1957) could be retitled Pal Joey - A Study in The Male Gaze or That's Problematic!  And this is coming from the guy who stands on soapboxes about modern audiences learning from and understanding the societal frameworks of a year in which a film was released.
But we don't get thirty seconds into the film and our hero is being accused of trying to both get a minor drunk and maybe sleep with her.  Another two minutes in and blatant racism.  And then 90 minutes of misogyny and every possible shot they can get of the female form.
Frank Sinatra plays a down-on-his-luck crooner (and a heel) who finds himself in mid-50's San Francisco looking for a gig when he stumbles upon an old pal playing a night club and horns in.  This leads to a job, meeting Novak and then former showgirl Hayworth, now turned socialite.  Novak and he are chummy-ish, but Sinatra actively pursues Hayworth, now a widowed millionaire.
I know, I know.  I'm the one who is like "holy cow!  Jane Russell is in this movie!" and whatnot, but how the players are framed and what story is being told beneath it do matter.  And there's something just oddly exploitative about this film that just... doesn't need to be.  I mean, in some shots someone decides "let's make sure you can see a woman's leg here for some reason".  Stuff like that, to how our two lady leads are framed.  It's a nuanced thing, but...  I know you have Novak and Hayworth, but let's not go full Tex Avery Wolf, people.  It's unseemly.  (The early bit with Hayworth riffing on her glove-dance in Gilda is a reminder of what this movie is not.)
And, the script is just kinda half-there.  Like, it never really makes sense why Sinatra is so gaga over Novak except that it's the mid-50's and she's playing a virginal good girl (who happens to also look like Novak, which, honestly is part of the script and plot).  But you alternative is RITA HAYWORTH who is VERY INTO YOU and has MILLIONS OF DOLLARS and seems, honestly, cool as hell.  Apparently - according to what I just read versus what was on screen - the part of Joey should have been cast much younger, and Hayworth's part much older.  Instead, they seem like near contemporaries, with Sinatra maybe having a couple of years on Hayworth (which he did).
Well done, Hollywood.
So the movie just kind of ends with Sinatra happily walking away from Rita Hayworth (like... why?), with no job for him or the 100 people he just put out of work.  And taking a girl with him that he is 100% going to gaslight and cheat on forever.  Although there's a fleeting moment where, in a 2021 context, I straight up thought they were about to become a Throuple.
But there is a *very* cute dog, and this movie contains a couple of standards that I assume must have come from the play the movie is based on which has music by Rodgers and Hart.
I can't say I was a huge fan of this one, and that - given the cast and crew - is kind of a bummer.
In an absolutely stunning sequence (played for laughs, btw) that would never make it into a version now, a very sober Sinatra ponders the passed out drunk form of Novak on his bed, and we have a name for what he was thinking about before the little dog shoos him away.
Old movies are nuts, y'all.
Posted by The League at 1/26/2021 11:58:00 PM