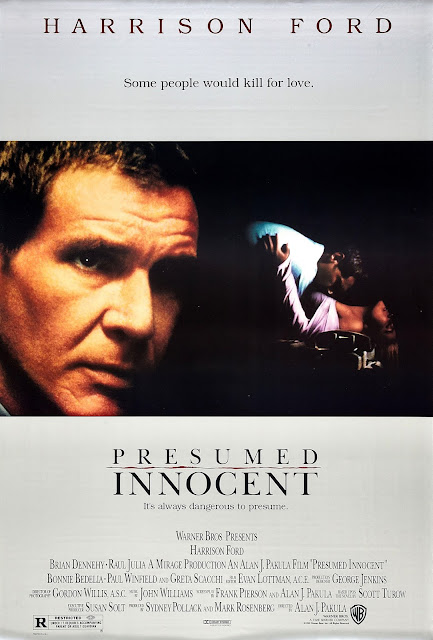 Watched  04/09/2021
Format:  HBOmax
Viewing:  Second
Decade:  1990's
Director:  Alan J. Pakula
It's fair to say, that when I saw this at age 16 or whatever it was (I would have been 15 upon the film's release, and didn't see it in the theater) I followed the plot, but I didn't "get" the film.  Recently I was discussing this film with some folks who said it was a good neo-noir, and I should give it a shot, so I did.  What the hell else am I doing?
I'd literally forgotten I'd seen the film until reading the synopsis on wikipedia, and realized I had, in fact, seen it, but didn't remember which of the circa 1990-era adult court mystery dramas I was thinking of when and if details from the movie crossed my mind.  Firstly "Presumed Innocent" is as untelling a title as what often gets applied to noir.  Second, until about 1997, I think every fifth movie coming out was an actor in a suit going to court for some reason or other.
So, yeah, seeing a film about betrayal in a marriage and the fallout wrapped up in a mystery, semi-erotic thriller works far better at age 46 and with 21 years of marriage under your belt.  Also, realizing how *good* everyone is in this movie was a delight.  And goddamn the early passing of Raul Julia, who was amazing here.
The film stars Harrison Ford playing the focal attorney, a guy Moira Rose would describe as keeping it all inside, like a bashful clam.  He's married to Bonnie Bedelia (way to go), but cheated on her (boo) with another prosecutor, Carolyn (Greta Scacchi).  When Carolyn mysteriously turns up dead, Ford's boss - Brian Dennehy at the height of his powers - assigns him to to the case despite his protests (and Dennehy had no idea).  Dennehy is up for re-election as head prosecutor, so, yes, having one of your own attorneys in an unsolvable crime is bad.
SPOILERS
It's a curious film as I'm not sure audiences in 2021 wouldn't peg Bedelia's character immediately.  Well, not everyone, but enough people.
We're all pretty savvy TV and film watchers, and as mystery film watchers, are going to wonder whodunnit, a thing the movie tacitly agrees to tell you.  And while we're given some goose chases to follow, Bedelia's character is obsessed with her own husband and what he's done to their marriage, but, really, that he seemed to care more about Carolyn than he ever seemed to care about her.
Ford's performance contains nuance that I don't believe I fully got back in 1991 or so, but watching now is crystal clear.  He might not actually be all that in love with Bedelia, but that's been his routine for a while.  Carolyn had fire, aggressive sexuality, and shared a passion Ford had once for the law, but he's becoming pragmatic.
The character of Carolyn might still appear in mystery novels or the right movie, but it's hard to imagine her not being rewritten in a movie today.  She is, in fact, sleeping her way to the top.  Ford is a means to an end - a dalliance along the way that she can use to curry promotion.  Frankly, I don't mind this in a character in any year - it's a fictional character, not a comment on how all women are in the workplace.  If anything, the commentary seems to be far more damning of men providing women with opportunity, but I can understand how presentation of a negative stereotype should be well considered before plowing forward.
Late 80's discussion on this topic doesn't match our current narrative, and I can see this topic getting confused - and so, yeah, it may not be entirely necessary for Carolyn to have multiple affairs in order for the story to work.  But, in the version that exists, it does add layers of complexity and does compound the mystery aspect.
Because this is NOT a a film about heroes.  And it's weird to me that audiences believe the sympathy we may glean from following a main character translates to an endorsement of said behavior.  Everyone in this movie is a moral quagmire, and no one in this thing comes out looking very good, from our protagonist to the victim to the prosecutors with a hard-on for taking down Ford's character for a political slam dunk.  Even the judge is deeply compromised.
But, dammit, y'all, watch it for Raul Julia and wish he'd lived longer.  As Ford's defense council, he's fantastic, and the scenes with Ford, Julia and a baby-faced Bradley Whitford are fantastic.
And if you want to see a pro take on the most thankless task in cinema, Bedelia's speech at the end of the movie - all tell, no show, still works.  It's weirdly uncinematic, but that's almost part of why it has impact at all.  On a bright sunny afternoon, sitting in her breakfast nook, she's confessing in bland detail how and why she murdered her husband's (former) lover.  No courtroom, no cross-examination, no sneaky lawyer tactics.  Honesty between a husband and wife in their home.
I don't know if this could happen in a movie now - it's not a climactic moment.  It's a grim epilogue to the story of Rusty Sabich almost going to jail for a crime he didn't commit, but it's also a reminder that this was always about the damage we do to our loved ones.
But, yeah, anniversaries and birthdays are going to be weird when you know your wife framed you up for murder.
Posted by The League at 4/11/2021 11:32:00 PM