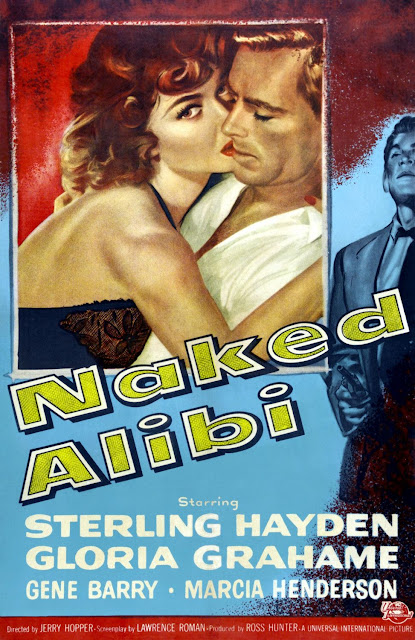 Watched:  04/12/2021
Format:  BluRay
Viewing:  First
Decade:  1950's
Director:  Jerry Hopper
Burning the last of my "it's your birthday, watch what you want" goodwill, I chose Naked Alibi (1954) - a movie I'd heard was "ehhh".  And, indeed, it was.
But, look, I'm a Sterling Hayden stan and a Gloria Grahame nut, so this seemed like a slam dunk.  Alas.
Sterling Hayden plays a detective that in literally any other movie would be a rogue cop.or just a thug of a cop (see Hayden in Crimewave).  Here, his underlings haul in a guy for basically existing on the sidewalk after dark and seem set to pin a crime on him minus any evidence, so he loses it and slugs a cop.  But the guy is a baker, with a young wife and kids.  It makes no sense, yet Hayden decides he's a crook and hassles him.  Two of his guys get blown up by a car bomb, and he decides it must be Al the Baker, and goes about police-harassing him, including manhandling him in front of witnesses and the press, which gets him fired.
This movie - made in a period very much not our own - decides "ah HA.  Cops is always right!"  Because after Hayden is FIRED he continues to harass Al the Baker, who freaks out and splits for Mexico.
Well, turns out Al (Gene Barry, Dr. Clayton Forrester himself) is actually shady as hell, is keeping Gloria Grahame down there on the side (she doesn't know about his wife and kids) and he's part of an international crime syndicate.  Hayden's Super Cop Crime Detecting Powers were fully functional.
I suppose some folks would like the switcheroo the story pulls here, but cops running people in for no reason, hassling them and framing them up may have lost some of its lustre.  I don't mind a good "Sorry, McClanahan...  my hands are tied.  The Mayor says we have to let him walk." and McClanahan dramatically slamming down his/ her badge to go seek justice.  But when the evidence boils down to "I hate his stupid face, that's why I know he did it!"... man.  That's...  that's not great.  Really, the cops seem out fo control in this film, like their own private thug squad and calls from the press to halt police violence which are an early factor in the film are dismissed as incorrect by the text of the film.
Neither Grahame nor Hayden seem to be giving it their all.  Hayden sort of lumbers around bellowing lines and Grahame doesn't even lipsynch well to her musical number.  And... look, it's not great to talk about flaws in someone's appearance, but Grahame was a natural beauty when she hit Hollywood, and around this time, she decided to have plastic surgery on her upper lip - arguably experiencing some dysmorphia.  And here, that lip appears frozen as it was rumored to be, and possibly packed with tissue under the lip.  And once you see it, it's hard to see anything else, especially as her character is not exactly written for Oscar material.
The story does literally nothing to support her falling for Hayden and suggests she should rat him out to her volatile boyfriend.
The film also takes place about 1/2 in a place called, imaginatively, Border City.  Clearly supposed to be a Mexican border town, but populated entirely by anglos.  There's really nothing in this movie that doesn't feel half-baked or poorly thought through.
Did I like it?  Not... really.  I've seen worse, and it at least has some decent camera work by Russell Metty, who has plenty of other solid credits to explain why the movie looks good despite itself, really playing with the street scenes and making the most of the backlot sets.
Also, look for a just-before-stardom Chuck Connors in a flat top!
Posted by The League at 4/15/2021 12:22:00 AM