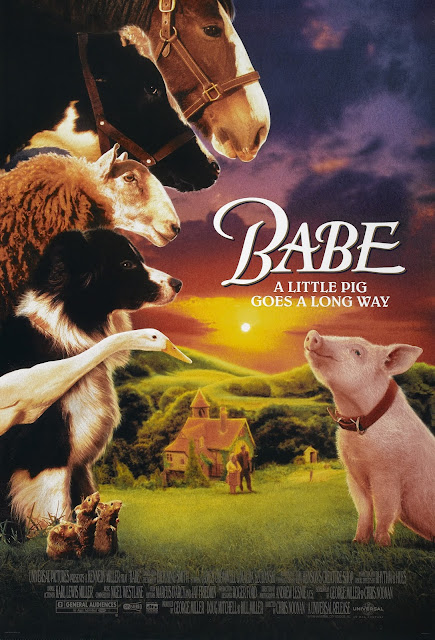 Watched:  04/05/2021
Format:  DVD
Viewing:  Unknown
Decade:  1990's
Director:  Chris Noonan
When Jamie and I started dating, I recall one of the things we agreed upon was Babe (1995), the movie about a polite little pig who unwittingly dodges the carving knife over and over while a quiet farmer recognizes his potential and figures him for an excellent sheep dog pig.
I don't recall exactly why I saw Babe, but for a streak from 1995- 1999 or so, I was at the movies 3 times per week or so, watching a good chunk of mainstream cineplex content, but also hitting Austin's Dobie and Village theaters to catch the "college rock" options when it came to movies.  What I can remember is my utter shock at how *good* the film was.  I hadn't read any reviews, I really expected it to be a goofy little kids movie, and I kind of stumbled out into the sun afterwards unsure of what I'd seen.
And, believe me, sitting around drinking beers with your pals fresh back from summer and saying "you know what was really good that I saw this summer?  Babe, the movie about the talking pig."  This is early-days film school where everyone's trying to prove they've seen the coolest, artiest stuff and where people rolled their eyes at you for talking about techniques from Star Wars, so  - to suggest that a movie was something that they had decided it was not - was taken about as well as the idea of a pig herding sheep.
But, maybe drunker and louder than the Farmer Hoggett, I held my ground.  "Well, if you haven't seen it, you can't judge, can you?"  But, hey, one thing Jamie brought with her when we started dating was a love of the movies, and she had her own tastes that jived with mine well enough.  And, yeah, Babe was kind of one of our early topics of agreement.
Babe works much like a traditional chap-book for younger kids read to by their parents, with chapter headings including little flourishes.  The writing of the narrator is primed just right to go over th eheads of the young ones and land hard with adults - right from the opening scenes.  Babe is born in a pig-factory and is headed for slaughter from the moment he's born.
At it's core, the film calls for two things - carving one's own destiny despite expectations, and doing so from a place of love and kindness.  And, on a farm where each animal understands their role from the day they're born - be it herding sheep or as a future dinner for "the boss", the fatalism is weirdly developed and dark, especially when the movie really points to how it's a social construct of the animals not defying their roles.  The farmers are presented not as capricious gods, but not part of the barnyard fray.
That is, until the farmer Hoggett follows his instincts (which seem right at almost all points, as he can see better ways of doing things), and trains the pig for show trials as a herding dog.
Babe, meanwhile, creates accidental disputes with dogs and cats, befriends the sheep, and finds a mother in a sweet-tempered border collie - navigating hurt feelings and confusion about his place.
The film is a tidy, self-contained bundle that continues to illicit a reaction from me at the finale, even though I've seen the movie quite a few times.  It takes some risks in storytelling, never speaking down to the children while working as a sort of story-time parable for the adults, for whom it seems intended.  It's a tough balancing act, but manages the trick remarkably well.
In the end, the movie was nominated for Best Picture at the 1996 Academy Awards, and I was running around yelling "AH HAAAA!" at the doubters.
Not part of the Disney IP farm, the film doesn't get much mention these days, which is unfortunate.  Like the two recent Paddington films, there's a timelessness to the movie that would make it appeal generation after generation.*  Stories about brave, sweet little pigs defying fate to shock the world do not go out of style.
The effects are more wobbly than they seemed in 1995 - a mishmash of real animals, puppets and some early-days lip-flap CGI on both puppets and living creatures.  But it all still works, and against the lovely cinematography acting and design, it's a gorgeous film.  And, of course, amazing sound and music.
*ironically, the bit of new-fangled innovation in the film, a FAX machine, is the thing which dates it now the most
Posted by The League at 4/10/2021 01:05:00 AM