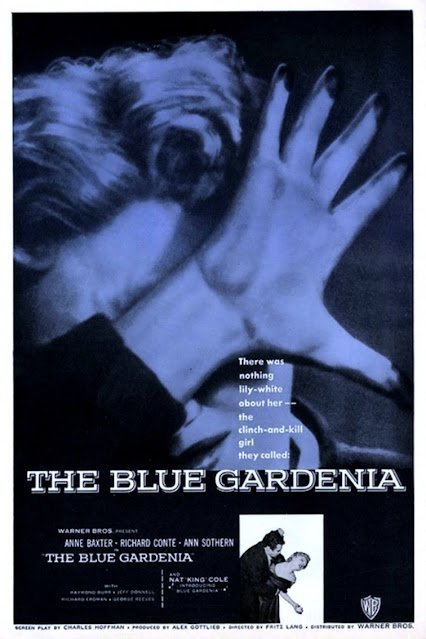 Watched:  04/13/2021
Format:  Amazon Watch Party
Viewing:  Second
Decade:  1950's
Director:  Fritz Lang
We'd watched The Blue Gardenia (1953) some time back, and this time I'm inclined to be kinder to the film.  It's still not my favorite, but with Anne Baxter, Ann Sothern, Richard Conte and Raymond Burr and Fritz Lang directing, you kind of expect a bit more.
Anne Baxter gets a Dear Jane letter from her solider-boy boyfriend who has met a nurse overseas, and tells her he's getting married.  She does as anyone might do, receives a call for her roommate (Ann Sothern) looking for a date, takes up the fellow on it, and meets up with Raymond Burr.  Because it's 1953, Burr is not a nice guy, and he gets Baxter drunk and takes her back to his place to take advantage of her.
Baxter wakes up at home, unsure of what happened, but she's left her shoes at Burr's apartment, which is embarrassing enough, but also: he's been killed with a fire poker.  So.  She seems to have totally murdered a dude and left her shoes behind.
Conte plays a local reporter - a social crusading type in search of headlines, and he begins the search for the woman they dub "The Blue Gardenia".
Fritz Lang wasn't one to shy away from a good thriller, of course, and this film puts the audience in the curious spot of identifying with a woman who just killed someone, with pretty good reason, but by social mores of the 1950's - if she's arrested, who knows?  Could be the gas chamber.  And if she's acquitted for self-protection?  One can assume she'd be "ruined" by attacks on her character for having made the terrible decision to cozy up to Raymond Burr.  The film doesn't explicitly say anything about a woman's place in society in 1953, but it's not hard to understand what the assumed rules are, and how Lang and the writers used those notions to build a better mousetrap for our protagonist.  As the audience, we know it's unjust, but...
Unfortunately, Conte is written as a bit of a dingbat, apparently buying a whole lot of "I have a friend who may have done a thing" storytelling, that I'd assume anyone as old as 14 would recognize as "and I assume this friend is you?"  But it's not how it's played off.
The movie generally *looks* great, with Nicholas Musuraca listed as Cinematographer, and who had plenty of prior experience he brought to bear in this film.
Again, the movie is fine - it just wasn't one I'd had any particular penchant for the first time I saw it, and that was more or less how I felt on round 2.
Posted by The League at 4/15/2021 11:45:00 PM