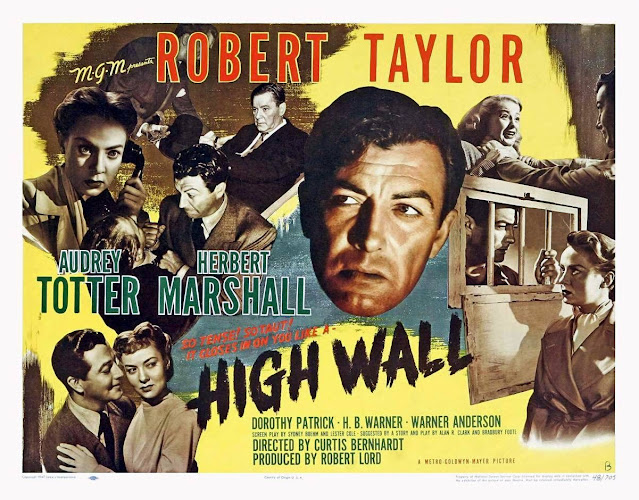 Watched:  06/03/2021
Format:  TCM on DVR
Viewing:  Second
Decade:  1940's
Director: Curtis Bernhardt
I watched this film a few years ago, and it seemed to bare a re-watch.
In the mid-40's, movies started to dabble a bit in the field of pop psychology.  Now, I'm not a psychologist and I am pretty unfamiliar with the practice, but I do recognize clunky, semi-pedantic approaches to delivering ideas.  And chucking those ideas in the 3rd reel in the name of plot.
High Wall (1947) is a pretty solid noir mystery that wants to exploit the latest trends in exploring the maze of the human mind, but also has one foot in "I dunno, do some hand waving about some medical stuff to expedite the story" that has always been par for the course for movies (and television).  And, of course, throws medical ethics out the window when a lady gets romance-feelings for a possible murderer.
It also plays on the insecurities and real problems of post-war life.  Robertt Taylor plays a former pilot who came back from the war to find a lack of opportunity, so he packed up and headed to Burma for work, leaving his war-time bride behind.  For the duration of his marriage, he's been mostly overseas, managing to not do much but get her pregnant one time, producing a son.
Shockingly, the wife seems to have strayed in her attentions and affections.  Taylor finds her in her boss's apartment, makes the connection and... BLACKOUT.  DEAD WIFE.
He's remanded to the custody of the local loony bin, where Signal Watch patron saint Audrey Totter is a doctor/ shrink.  She tends to believe the solution to everything is a good shot of sodium pentothal.  Like, loss of memory?  Sodium pentothal.  Chicken not zesty enough?  Sodium pentothal.  It's quite the reminder of what we were doing looking for shortcuts and believing in the power of chemistry after the war.
Anyhoo... she looks amazing.  Our banner at the top of this blog included a still from this movie.  But it's just not a great movie, even if it does include an elevator shaft-centric murder.
And, frankly, without the weight of the sodium pentothal story, it's got some good CYA stuff by our lead as he maneuvers his way around the city in pursuit of JUSTICE.  It just feels buried a bit by the heavy-handed amnesia and temporary insanity bits.
Posted by The League at 6/04/2021 12:43:00 PM