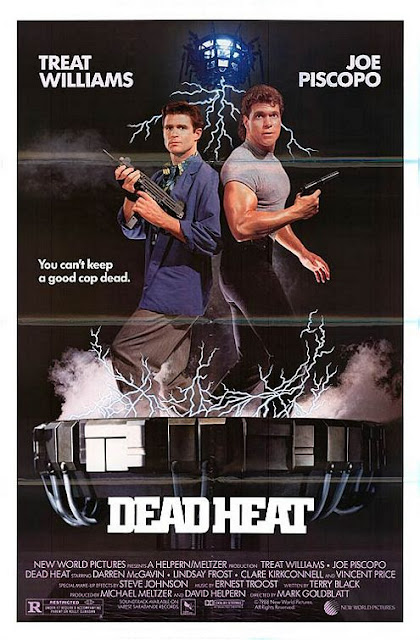 Format:  DVD
Viewing:  First
Decade:  1980's
Director:   Mark Goldblatt
In 1987 or 1988, when this movie *should* have been aimed directly at me, I saw the trailer for Dead Heat (1988) and took a hard pass.  I never cared much for Joe Piscopo, and I can say I had no idea who Treat Williams was in 1988.  So, alive or dead, I didn't really care to see a buddy-cop comedy starring these two.
Mostly, I'd totally forgotten this movie existed until about two years ago when Simon suggested I watch it.  But I did remember it.  Joe Piscopo.  Cops.  One of them was dead.  Probably Piscopo.
So, last night was the first time in a year or so Simon has been to our house for a movie night (hooray, vaccines!).  Si brought an assortment of films, but I decided finally watching this movie was a thing we should do.
Look, Simon really, really likes this movie and was generous enough to share it with me.  And I will say this - it does have a bonkers final 20 minutes.  I liked the last 20 minutes.
It is directed by the same guy who directed the 1989 Punisher movie that me and like 20 other people have ever seen.  But apparently he's an amazing editor.  Terminator 2 and other credits.  But, man, it just *feels* like a Corman movie as much or more than anything else that came out of New World Pictures in the late 80's.
Anyway, Simon really likes this movie, and there's no reason for us to take a knock at it.
Posted by The League at 6/03/2021 10:56:00 PM