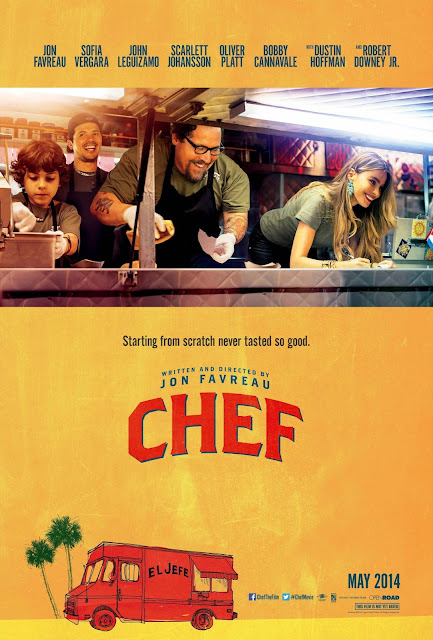 Watched:  07/03/2021
Format:  Amazon Prime (I think.  Jamie dialed it up.)
Viewing:  First
Decade:  2010's
Director:  Jon Favreau
Chef (2014) is a terrific little film, not too hung up on being more than light entertainment with a bit of grounding in mid-life crisis and family issues.   And, of course, the whole thing is kind of meta.
Starting as a kind of wunderkind responsible for writing and starring in Swingers back in '96, Favreau had been working on bigger and bigger films, not least kickstarting the Marvel Universe by directing, starring in and otherwise producing the Iron Man films (at pre and post-Disney Marvel).  But if the movie is about a guy who works at a well-respected LA bistro, losing touch with his son and after the divorce from his wife (a very good+funny Sofia Vergara), and certainly in a rut professionally - one can see how Favreau might have come to a story about a guy who felt like he needed to get back to the basics of what he loved in the first place.
In the film, he accidentally starts a twitter-war with a famed food reviewer that... escalates.  Favreau has to do what Rocky's of all types have always done - go back to where it started and find the passion again.  Unfortunately for me, that starting over looked awesome, and I was starving while watching the movie.
But, yeah, it's kind of cool Favreau decided to do what his character was doing and get back to his indie roots to remember how this works and where his passion is.  That said, I mean, I think Favreau is an underdiscussed giant of the modern age.  Go look at his imdb page if you have questions.  And, truthfully, after this film, he really did come back with all burners firing.  I mean:  The Mandalorian.
To carry him on his way, Favreau talked a lot of friends into appearing in the movie, which is both charming, works and is a total distraction.  I mean, when Dustin Hoffman shows up in a small but crucial role and Dustin Hoffmans the hell out of it, you're doing pretty great.  But he also has Scarlett Johansson,  Robert Downey Jr., Bobby Cannavale, Amy Sedaris, Oliver Platt, and more.  John Leguizamo is always good, but he's terrific here (loose and hilarious) as Favreau's sous chef, and you can't not mention Emjay Anthony, who manages to pull off a terribly sweet, bright kid who really does just miss his dad.
As an Austinite, it was weird to see 2013-ish Austin appear in the film as Favreau, Leguizamo and Anthony make their way from Miami to LA in a refurbished food truck.  It's a reminder of how bizarre it is to see how outsiders see (or, increasingly, saw) Austin.  Ie:  Guero's (which locals are kinda "meh" on, but tourists love it) and Franklin's BBQ (which locals don't go to because tourists line up for hours every day, so we go to places pretty much just as good).  But it's still nice to see Guero's porch with Gary Clark Jr. playing there, like that is a thing that happens on a Tuesday.*
The use of social media in the film is already a bit dated - everyone kind of gets twitter now.  But I was impressed with how seamlessly the film slid it in, making it clear to the audience (who might not have known how it worked in 2014) what was going on.  If you're going to have screens and social media fit into a movie, make sure it's important, and this movie totally pulled that off.
Not every movie needs to challenge, some can just show and do so successfully.  I actually loved the father-son stuff, not least of which was the little speech Favreau gives Percy about why he does what he does for a living and his passion for it - and how important it is to do it well.  It's that kind of stuff that elevates this film from a light, disposable comedy to something worth checking out.
Anyway - good stuff.  Favreau owes himself one of these every 5-7 years.
*btw, if you came to Austin and I needed to take you out, I would definitely take you to Guero's, just because it's a fun strip of street, the food is pretty okay, and you could say you'd been there.  But they absolutely would not really let a food truck park in front of their restaurant.  Curiously, the first food trailers in Austin I ever saw (including "Hey Cupcake") appeared across the street from Guero's in the parking lot of a church.  There was also a place I got a cone of meat, but I can't remember the story with that one.
Posted by The League at 7/05/2021 01:44:00 AM