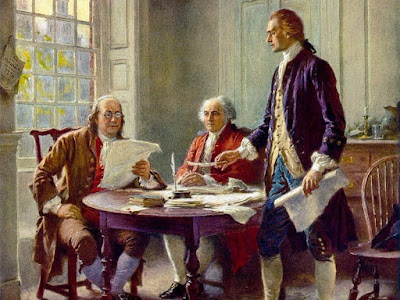 Perhaps the date we observe has as much to do with the stirring text of the Declaration as anything - and it is the formal document eventually signed by most of the delegates to the Congress.

While not a document which laid down the manner in which the government would be run, which would not arrive for over a decade in the form of the Constitution of the United States, the Declaration of Independence does lay down the moral reasoning for our separation from England.  The Preamble, often memorized by school children over the years, and familiar to most Americans, formed the ethos of America as a state which required the consent of the governed, and that the government would serve the needs of the people.  But also that government not be changed on a whim - but when the government no longer responded to the needs of the governed.

We hold these truths to be self-evident, that all men are created equal, that they are endowed by their Creator with certain unalienable Rights, that among these are Life, Liberty and the pursuit of Happiness.--That to secure these rights, Governments are instituted among Men, deriving their just powers from the consent of the governed, --That whenever any Form of Government becomes destructive of these ends, it is the Right of the People to alter or to abolish it, and to institute new Government, laying its foundation on such principles and organizing its powers in such form, as to them shall seem most likely to effect their Safety and Happiness. Prudence, indeed, will dictate that Governments long established should not be changed for light and transient causes; and accordingly all experience hath shewn, that mankind are more disposed to suffer, while evils are sufferable, than to right themselves by abolishing the forms to which they are accustomed. But when a long train of abuses and usurpations, pursuing invariably the same Object evinces a design to reduce them under absolute Despotism, it is their right, it is their duty, to throw off such Government, and to provide new Guards for their future security.--Such has been the patient sufferance of these Colonies; and such is now the necessity which constrains them to alter their former Systems of Government. The history of the present King of Great Britain is a history of repeated injuries and usurpations, all having in direct object the establishment of an absolute Tyranny over these States.

It's something all politicians should read and re-read every year as a reminder of why the United States exists and our bedrock principles and ethics - to be governed only with the consent of the governed.  And it's something citizens themselves should remember - that we have a responsibility to ensure our participation and not just roll over as political forces seek to cow and silence the governed.

Here's to some incredibly brave people, who put their mark on a document that surely could have meant their death, had the war not turned in their favor, and who were bold enough to push back against a government that saw them only as subjects - surely with no idea of the country they'd set in motion or how their words would stoke inspiration for people they never envisioned.