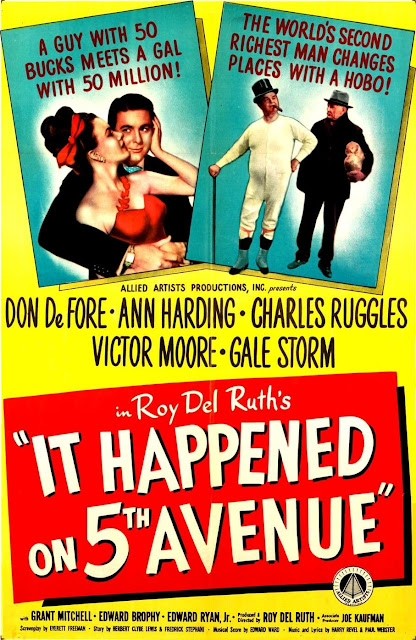 Watched:  12/13/2021
Format:  HBOmax
Viewing:  First
Decade:  1940's
Director:  Roy Del Ruth
The handling of media in regards to its availability in any format is such a weird animal.  As is the impact of media long after the media originally played and to whom.
It's a Wonderful Life famously did mediocre box office (released *after* Christmas in January for some reason).  Contemporary critics shrugged it off as sappy (it is, but...), and it fell into public domain access to become a holiday staple as the movie was cheap to show.  Repeated viewings and a new appreciation of the film eventually found the film its audience.  And, of course, now It's a Wonderful Life is *the* American holiday media.  Heck, I have a poster for it in my stairwell I see several times per day.
I only recently heard of It Happened on 5th Avenue (1947), which I chalked up to the fact it didn't star anyone I really knew (except Alan Hale Jr. in a supporting part).  But it seems the movie just basically disappeared for 20 years, from 1990-2010.  For me, personally, those were kind of some big years there as I was doing legwork looking for new old films.  Why did it disappear?  I have literally no idea.  But I can tell you, unless there's a community of film nerds clamoring for a film, the studios may not care.  The catalog may just be sitting there ready for exploitation, but most of the audience for movies would rather see something brand new but terrible than black and white, but excellent.
It Happened on 5th Avenue's reviews were not great when it came out.  Considered a bit corny and old fashioned, I guess (it does feel like a Depression-era story despite the fact many of the characters are ex-GI's), it took hits for its simple and story-book storytelling.  Now, the film feels like a dream of the mid-20th Century caught in a snow globe.  The messages are still timely.  It's just now a snapshot of a bygone era and nostalgia makes things seem possible that would seem hokey in a modern context.
Essentially:  A homeless man, Aloysius T. McKeever (Victor Moore), has figured out in years prior that millionaire industrialist Michael J. O'Connor (Charlie Ruggles) winters in Virginia every year.  And, has found a way into his Fifth Avenue mansion, where he decamps each winter with his trusty dog.  O'Connor is building a hi-rise downtown, which displaces ex-marine Jim Bullock (Don DeFore).  McKeever discovered Jim sleeping on a bench, and invites him to spend the night in the mansion.
O'Connor's daughter Gale Storm) runs away from finishing school and returns to New York, figuring she can stay in her own home - only to be discovered by Jim and McKeever.  Realizing they're harmless, she poses as another interloper.
The house soon fills with some former Marine buddies of Jim's, and Trudy O'Connor convinces her parents to pose as homeless people and also stay in the house.
None of it makes any sense.  But it's all very sweet natured.  Michael O'Connor, our industrialist, is not won over with a few simple lines.  It's really a slow process (and he really does seem like a good father, putting up with a lot just because he loves and cares about his daughter to begin with).  But it is a movie that focuses on the riches of family, friendship and what folks can mean to each other over the naked pursuit of wealth.  McKeever has some wisdom, and he's here to dole it out.  Also, to smoke your cigars.
Anyway - I was totally shocked this movie hasn't found a place along with other Christmas staples.  It may not have songs or big-name talent modern audiences would click to (at the time, Ruggles, Gale Storm, Don DeFore and Victor Moore were stars.  Gale Storm and DeFore were very big in the golden age of television).  But maybe the availability and HBOmax pushing the movie can get it some well-deserved traction.
I genuinely liked the movie.  It's very sweet, feels kind of in line with work like You Can't Take It With You, and belongs on the shelf alongside The Shop Around the Corner and other movies with a unique feel for the season.
Posted by The League at 12/15/2021 01:17:00 PM