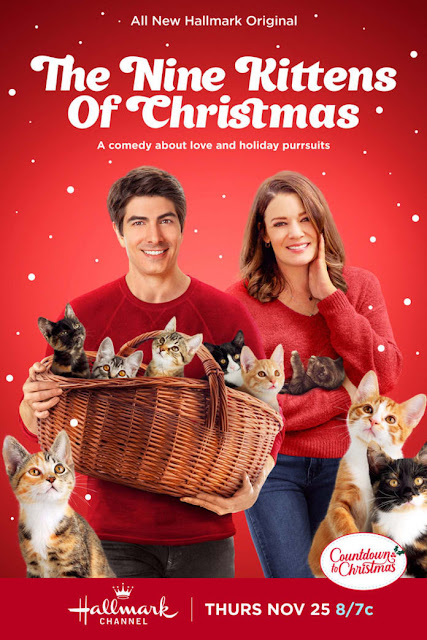 Watched:  12/15/2021
Format:  DVR of Hallmark
Viewing:  First
Decade:  2020's
Director:  D. Winning
So, a few years back I noted that occasional Superman and Ray Palmer actor Brandon Routh had signed up for a Hallmark movie.  It makes sense.  He films in Canada all the time, anyway.  Might as well get a little scratch between seasons of TV and whatever else he's up to.
What I remembered about the movie was (late edit: I had not seen all of this movie):  Routh was a fireman, he was doing home maintenance, a cat was involved, and the love interest could also act (Hallmark has to balance how terrible their leads are, and many of them are truly wooden robots).  But a lot of name folks pass through the Hallmark factory every year, so I enjoyed it for what it was and then chucked the movie from anything resembling RAM in my head.
Well, lo and behold, someone scraped enough pennies together and got the cast back together from the cat-related movie and came up with a concept for a sequel.  If one or two cats worked - why not 9?
Anyway, not too long ago a friend asked me if any of these movies ever ended with the woman deciding she doesn't need anyone and going off on her own, and I guess after the credits rolled on the prior movie, that's what happened here.  Now a veterinarian in Miami (more on that shortly) with a boyfriend with whom she practices, I guess Marilee (Kimberley Sustad) had ditched Zachary (Brandon Routh) after the events of the prior movie, and she's doing ok.  She's set to return home a couple days before her boyfriend joins her.
But the... story the movie wants to tell spends a LOT of energy justifying Marilee's departure and making Zachary seem like he f'd up when it's not clear he did?  There's a whole section where Marilee states that she went to Miami to make Zachary learn how to change.  Which... is not okay?  She went all the way across a continent for an internship and as near as I can tell expected him to leave his job and friends for her.  And he did not.  This is played as hugely disappointing, but, friends - ultimatums and "fixing" people does not often go the way we hope.
I don't think that makes the character of Marilee unsympathetic - I think I know where they were going - the writing was just Hallmarky and clunky.  More, Zachary never defends himself, really.  Nor is he given the chance to talk to his confidants (Gonzo from Trapper John!  Now with silver hair and mustache!) and a cat about his decision.  He just keeps saying "it was the biggest mistake of my life to let her go".
But, y'all, never follow a veterinarian to a second location.
Anyway.  It's a sweet, mostly friction-free movie as our leads find a box of kittens and then go about getting them adopted.  And I don't want a cat - but this did remind me of how darn cute cats are.  Even when they're... throwing a phone at you across the bed?  If you like cats - honestly - this movie was literally written for you.
My man Brandon Routh did his thing, which I know Jamie appreciated, and co-star Kimberley Sustad is by far a cut above many of her fellow Hallmark-stars.  And neither is afraid to play a scene talking to a cat that looks mostly like it wants to squirm away.
Posted by The League at 12/16/2021 12:12:00 AM