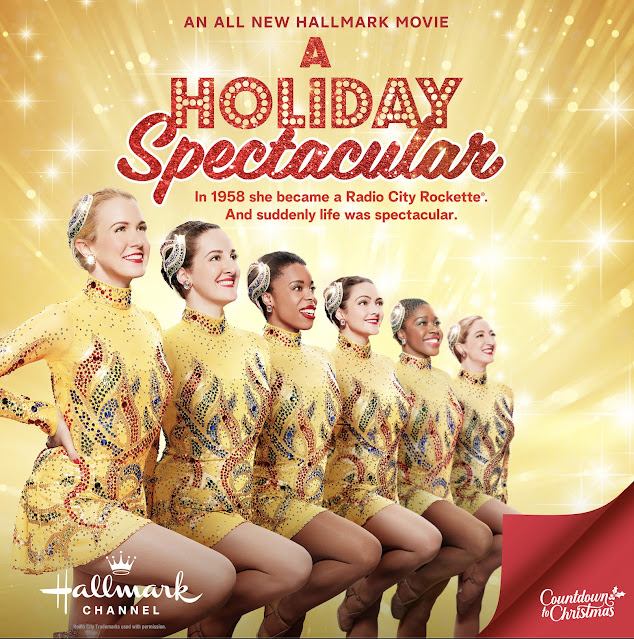 Watched:  11/27/2022
Format:  Hallmark Channel
Viewing:  First
Director:  John Putch
It's easy to forget that before they had a cable channel and the need to fill programming 24/7, Hallmark started making movies for network television.  Back in the day, Hallmark used to deliver semi-prestige Sunday-night movies with name talent.  I don't think this happens anymore as they've moved these movies to The Hallmark Channel and the budgets have taken a hit of sorts, but the DNA of those "Hallmark Presents" movies still exists.  So, every Christmas, tucked amongst the usual low-budget fare of the Hallmark movie season, you do get a movie or three with name actors or big set pieces.
One of this year's offerings is A Holiday Spectacular (2022), which has only two name actors, one of whom is Eve Plumb, which blew my mind, and Ann-Margret.  Ann-Margret mostly only appears in a framing sequence and probably knocked her part out in 2-3 days of shooting, but it's still a delight to see her.
In a way, the big star of the film aside from Ann-Margret is the world famous precision dance team, The Rockettes, who somehow I've still never seen perform, which seems impossible.  But the movie does a neat trick of tying the legacy and history of the Rockettes (who have existed in some form since the 1920's) to the modern era by having Ann-Margret appear as a former dancer telling her grand-daughter about her own history as they wander around Rockefeller Center which doesn't need any set dressing, really, to play itself in mid-Century America.
The real star of the film is Ginna Claire Mason, who is really a Broadway star (Wicked, Flashdance) playing the young Maggie of the 1950's.  Mason hasn't done much screen work, but I think maybe she could do more?  She has no problem carrying the film.  She just does much less shimmying than you will remember Ann-Margret doing in a similar period.
So, yes, not only did Hallmark go all in on The Rockettes, shooting in NYC here and there, this is a period piece, and all the expense that implies.
The basic plot is a sort of League of Their Own meets Poor Little Rich Girl story about a society gal running away to the big city to become a dancer while lying to her family and dull-as-hell fiancée about why she's in New York for 3 months.  Along the way she makes lifelong friends and finds love with a Navy photographer? who is also defying his parents' expectations.  (Eve Plumb, btw, plays the boyfriends' mom, and veteran Broadway performer Carolyn McCormick plays our leads' mom.)
I won't oversell it.  It's fine!  You might enjoy it.  If I had a little kid I wanted to understand that sometimes parental expectations don't align with personal passion, I'd think this movie does it as well as many.  It actually does try to give all of the supporting characters arcs, from the lead's romantic interest to her roommate, to their close friends within the Rockettes.
We are treated to some Rockettes numbers (with them cutting in our leads in some close-ups, but good luck spotting them in wide shots) - and this is clearly an ad for you to come see The Rockettes while in New York.  Which I would!  But.  I have not.
The twitter-riffic criticism of the film is that the movie tries to pave over the Rockettes' less than ideal history of resisting desegregation into the 1980's and instead casts race-blind for some roles.  And, of course, includes the modern Rockettes line-up.  There's probably a movie out there one could make about the real-life integration of the Rockettes, but I don't know if a fairy tale about finding friends along the way is that movie.  We're in some weird territory here, but I choose to think Hallmark is presenting an ideal we should have had, just as the Rockettes work is seen as tough but basically a big family - and that may be far from the truth.  That work looks hard, man.
Anyway.
Posted by The League at 11/29/2022 11:27:00 AM