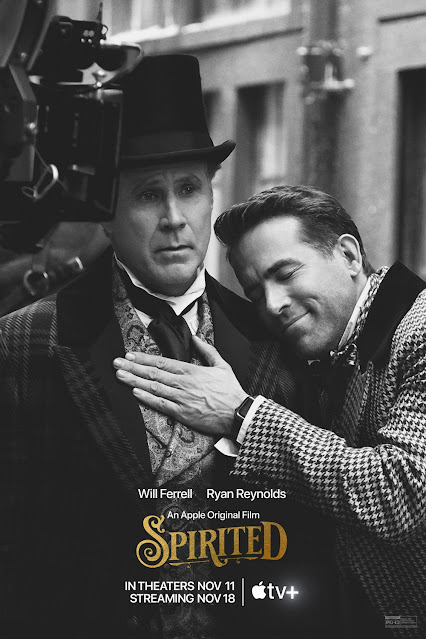 Watched:  11/26/2022
Format:  Apple+
Viewing:  First
Director:  Sean Anders
So, at our house, there are two very different stances on Dickens' A Christmas Carol.  To me, the book is a near-religious text and an annual reminder that one can make good on a life ill-lived, that every year is a chance for change and a reminder of how we can improve the lot of those around us.  We are a product of our lives, but at the end of the day, it's the choices we make daily that define how we impact the world.  To Jamie, it's this thing that's on at Christmas that people keep remaking as movies of varying quality.  I think both of these viewpoints are true.
I'll need to give it another viewing, but it's possible Spirited (2022) will enter the very nichey canon of my favorite adaptations of the story, which include the George C. Scott version, the Patrick Stewart version, Muppets Christmas Carol and Scrooged.  Given the way this year's Thanksgiving has gone down, I may just be raw and in need of a boost that this movie provided, but here we are.
While I'm more than done with movies investigating the mechanics behind Santa's operations (Fred Clause and Arthur Christmas are maybe my highlight of that genre), no one had really taken on the same idea with A Christmas Carol.  And if I'm being honest with myself, I don't know if I'd put any thought into it other than it's a ghost story and this is how they work.
The movie follows The Ghost of Christmas Present (Ferrell) as he has another successful Christmas haunting someone into goodness, could retire now but won't, and wants to take on a case marked "Irredeemable" in the file - as in, no amount of haunting will help this guy.  We're treated to a view of the operations for the ghosts, which includes plenty of research, design and development.
But, look, you're either in for Ryan Reynolds and Will Ferrell turned up to 11 or you're not going to like it.  It's a smart enough movie to know Scrooged owns the modern update and namechecks the movie as events unfold, but it also knows there's more to explore about how (a) being better doesn't happen as a single lightning flash, and (b) it doesn't mean you don't live with your worst choices.
That said, it's a comedy.  And a funny one, even if it takes the familiar path to a pretty dark place for our Perp.  The leads are joined by Tracey Morgan voicing the Ghost of Christmas Future and Sunita Mani  (who I think is great) as GC Past. The comedy is a weird meix of awkward Will Ferrellisms and Ryan Reynolds' patented rapidfire delivery, but as character stuff, it works.
And, look, this movie is also a musical, and a lavish one at that.  The songs are maybe less memorable than they could be (minus Good Afternoon, which I would have lost my mind over in 8th grade.  Or at age 47).  But, man... the dancing going on in the movie is insane.
Again - I need to watch this again, but I think I liked it a lot.  There's some stuff that really gets at the core of the Dickens material, so you know it's been properly vetted and understood in a way not every Scrooge movie goes for.
Posted by The League at 11/28/2022 04:04:00 PM