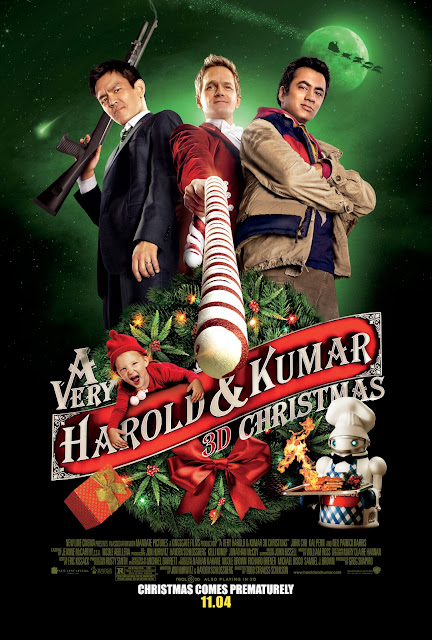 Watched:  11/30/2022
Format:  HBOmax
Viewing:  Second
Director:  Todd Strauss-Schulson
Look, I'd seen this once back in 2012 and that was it for me, but Jamie is currently dealing with COVID, and so we're not looking for movies that are downers or super complicated at the moment.
And so it was that after approximately 45 seconds of looking, I tuned into A Very Harold and Kumar Christmas (2011) - a movie that a mere 11 years later could never be made.  It's still relatively funny, but I'm also far older than I was when the first Harold and Kumar movie hit in 2004.  So, you kind of have to put yourself into the mental state of the early 00's and then the shift to adulthood that this final installment reflects.
But, yeah, its maybe the last gasp of a string of movies featuring dudes behaving badly for yuks and a pre-#MeToo worldview that impacts a lot of key punchlines.  Also:  baby doing drugs (this absolutely does not hold up).  And, of course, the charm of a stoner comedy doesn't necessarily hold up over time for reasons so complicated and out of the scope of this blog that I don't feel like getting into it - but I'll say "aside from their musical selections, stoners are mostly deeply boring and tedious IRL."
As left and right horseshoed into overlapping end-states driven by differing concerns, the movie landscape has become a very different and more...  concerned place, in a way not really seen since the early 1960's.  It's not that you can't make a movie like this - no one is stopping you, but it's often not seen as something for a general audience or theatrical release.  Stuff like this now feels like it's a Netflix or Hulu drop.
It is also super weird that Kumar had spent a couple years in the White House and filmed this during a sabbatical.
Posted by The League at 12/01/2022 05:28:00 PM