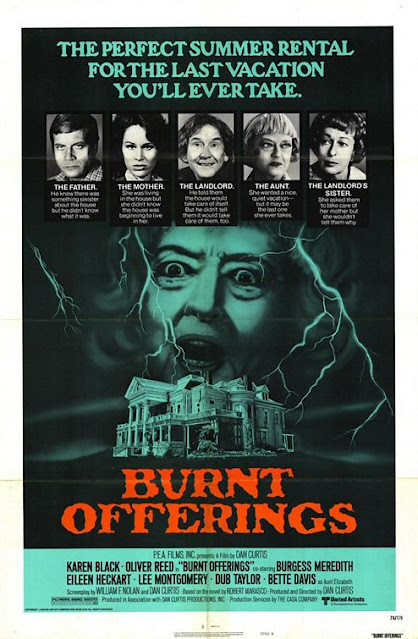 Watched:  06/01/2021
Format:  Amazon Watch Party
Viewing:  First
Decade:  1970's
Director:  Dan Curtis
I liked this one!  A haunted house movie filmed in the country house I'm familiar with from A View to a Kill.  But Burnt Offerings is in the mode of haunted house film I quite like, from The Haunting to The Shining.  But maybe a lot more indirect than those films?
The cast is small, but contains Burgess Meredith (briefly), Bette Davis, Karen Black, Oliver Reed and Anthony James.  Also, the kid who grew up to become Jeff in Girls Just Want to Have Fun.
I have also realized talking about the movie any more will spoil it, so I'm gonna shut up.
Posted by The League at 6/01/2021 11:21:00 PM No comments: 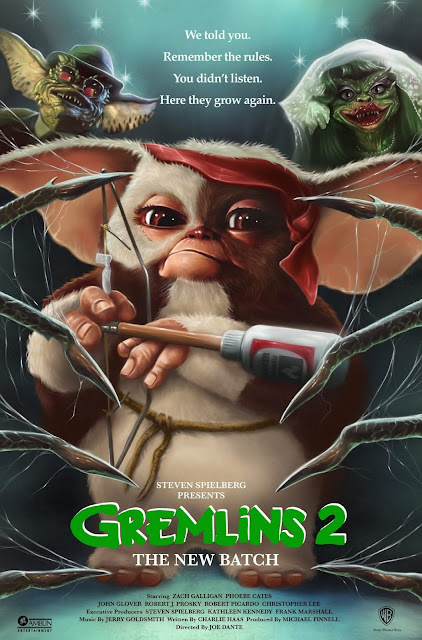 Watched:  05/24/2021
Format:  BluRay (Arrow)
Viewing:  Unknown
Decade:  1980's
Director:  Paul Verhoeven
For more ways to listen
Dead or alive, you're listening to this PodCast! JAL and Ryan stay out of trouble and talk a 1980's sci-fi action drama satire that's way the hell better than it should be. We look at the movie that may have had way more about to say about our present day back in 1987 than near any other sci-fi of the last 50 years. Join us as talk what we love about a movie about a guy we call "Robo".
The Signal Watch PodCast · 149: "RoboCop" (1987) - a Signal Watch Canon Episode w/ JAL & Ryan
Music:
Drive Montage -  Basil Poledouris, RoboCop OST
RoboCop The Musical (Murphy, It's You) - Jon Kaplan & Al Kaplan, Jon & Al: The Legolambs Musicals
Signal Watch Canon:
The Signal Watch PodCast · The Signal Watch Canon
Posted by The League at 5/31/2021 10:57:00 PM No comments: 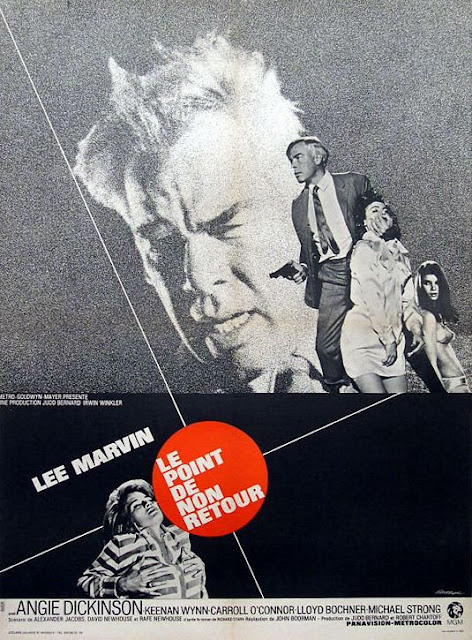 Watched:  05/31/2021
Format:  TCM on DVR
Viewing:  Unknown
Decade:  1960's
Director:  John Boorman
It's been some time since I'd revisited Point Blank (1967), and I'm glad I'd had a few years in between.  I'd seen the movie years ago while I was reading the Parker cycle of novels by Richard Stark - maybe the only series I've ever read in its entirety - and this movie is based on the first in the series, The Hunter.
But it's been a while since I read The Hunter, a book that obviously left an impression on me as I did read the subsequent 20-odd books, and I was able to better separate Point Blank and Boorman's ideas versus constantly running a mental check of how the film and movie differed.  And they absolutely do differ, saying different things.  There's a reason Richard Stark (better known as Donald Westlake) wouldn't allow anyone to use the name "Parker" in a movie, even as he let them adapt the plot and use supporting character names.  Lee Marvin's "Walker" isn't Parker.  And that's fine... It's good, in fact.
Now, one day I *want* a straight HBO-style treatment of the Parker novels by someone who *gets* it.  Each one is probably worth 3 episodes of something.  But I dig what Boorman did here - that rather than operating from pure rage and cold revenge, Walker may not be exactly sure why he's doing this.  Rather than coming to life and changing motivations after being shot and betrayed, he really did leave something at Alcatraz.
Maybe borrowing from the quasi-non-linear standard of both noir and the Parker novels, Boorman does some interesting stuff here with flash-forwards and flash-backs, maybe stepping it up a bit to do in shorthand what noir traditionally would do in extended scenes.  There's a lot of exposition that has to be delivered, and it's a smooth way to do it - but in the case of the film versus the book, Walker seems to have had warmth at one point and feelings for Lynn.  He attends things like "reunions" and seems to have had loyalties and friendships - all of which is not in him when he escapes death.  He may have been fearsome before, but now he's something else, unrecognizable even to himself.
Anyway, I'm sure I've talked about Point Blank a few times.  Several years ago I attended Noir City in San Francisco where they'd invited up Angie Dickinson who spoke about the movie and Lee Marvin (and looked like a million bucks).   It's just a favorite at this point, and I definitely recommend it.
Posted by The League at 5/31/2021 04:56:00 PM 2 comments: 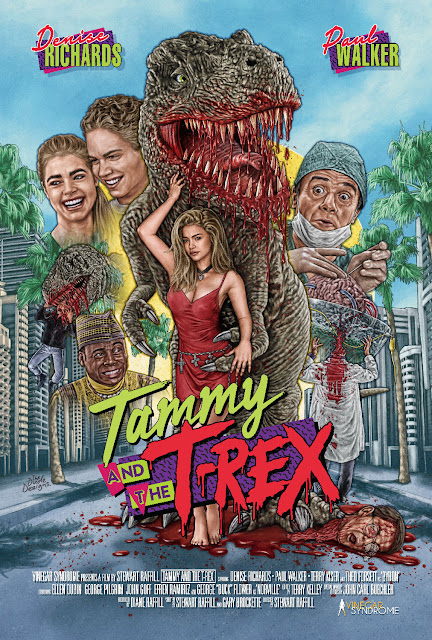 Watched:  05/30/2021
Format:  Shudder
Viewing:  First
Decade:  1990's
Director:  Stewart Raffill
Until very recently, in whatever spot in my brain that houses barely-remembered covers of VHS tapes from my college years, I had filed Tammy and the T-Rex (1994) as a children's movie.  It is NOT.  And I wonder how many parents put this on for their kids without realizing what it is.
I've seen it, and I can't tell you what it is.
Apparently the copy going around that I saw on Shudder is the original cut of the movie, which may have been seen in Italy.  The American version was cut down to PG-13, but this version is definitely an R for gratuitous gore.  This version's titles also insist this is "Tanny and the T-Rex".  I don't know if the word "Tammy" in Italian means something else or just sounded strange.  Or was a type-o.  I'd believe anything, because no one in this movie is trying.  It's not the kind of movie where people did try.
Read more »
Posted by The League at 5/30/2021 06:19:00 PM No comments: 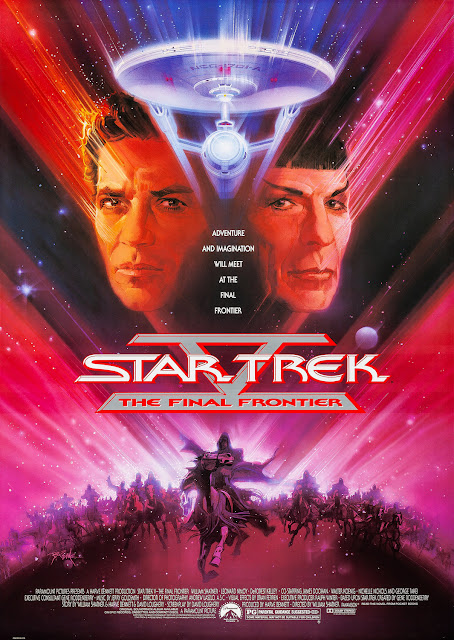 Watched:  05/29/2021
Format:  Amazon Prime
Viewing:  Second
Decade:  1980's
Director:  William Shatner
I always like me some Trek, but the last time I watched this movie was in 1989, and it was the last time I saw it for a reason.
Star Trek V: The Final Frontier is a weird mess of a film, with no coherent plot or threat, or goal.  Coming off the Star Trek II - IV trilogy, which had run the gamut from revenge-driven space battle to whale wrangling comedy, coming up with what was next for our crew as they now had The Next Generation nipping at their heels was going to be a tall order. And, over and over again, the movie just fails to deliver as an adventure, a sci-fi premise, a philosophical exploration or a comedy.
Read more »
Posted by The League at 5/30/2021 02:52:00 PM No comments: 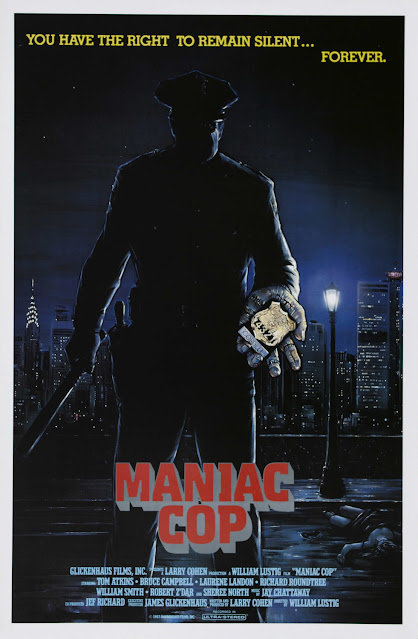 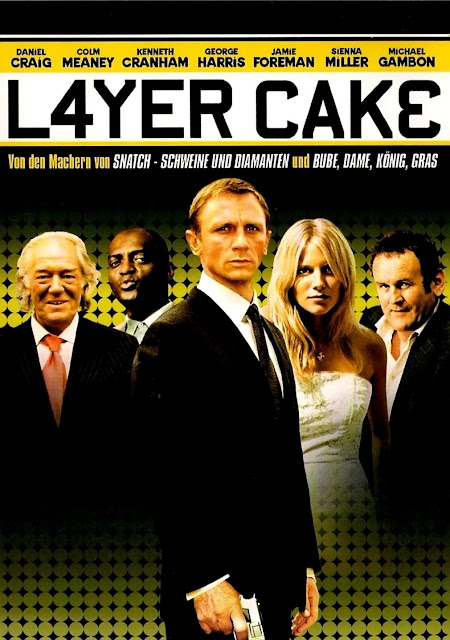 Watched:  05/28/2021
Format:  Amazon Streaming
Viewing:  First
Decade:  2000's
Director:  Matthew Vaughn
For a moment there, Britain was exporting some hip crime movies that Americans decided were a pretty good idea.  For a number of reasons, I missed Layer Cake (2004) when it hit the States in the summer of 2005.  And just never saw it afterwards.  Which is crazy.  We're Daniel Craig fans in this house.
It's a plot-heavy, occasionally cheeky gangster movie that served as an accidentally good pairing with The Brothers Rico, which I'd watched the night before.  Both films are about guys who are doing well enough in legitimate business that they want to leave the life behind them - but in Layer Cake, we aren't there yet.  We're just considering retiring after years packaging and selling cocaine in London when our nameless lead, played by Daniel Craig (and - it's clear this is the movie that inspired someone to give him Bond), gets pulled in as an errand boy by his boss, to find a missing girl and to broker a deal with a wild-card hoodlum who has a million hits of ecstacy he's stumbled into and is looking to sell.
Read more »
Posted by The League at 5/29/2021 03:20:00 PM 2 comments: 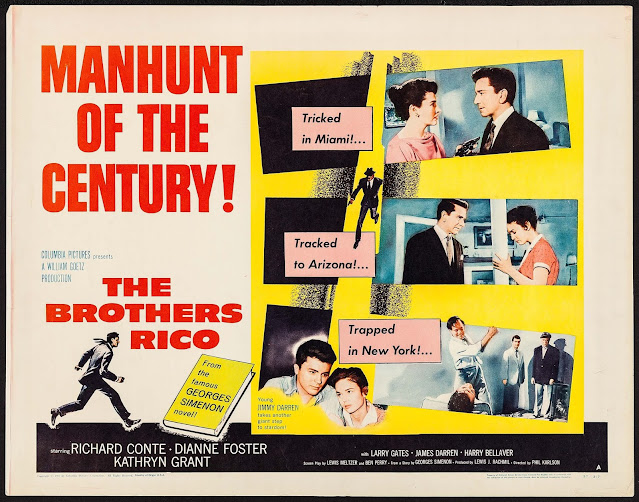 Watched:  05/27/2021
Format:  Noir Alley on TCM
Viewing:  First
Decade:  1950's
Director:  Phil Karlson
For gangster and crime film fans, there's a lot to like in The Brothers Rico (1957), and I have to wonder how many future gangster pictures were influenced by this one.  A story about family loyalty, gang loyalty, and where the two intersect, it's a tough picture.
Fortunately, it stars Richard Conte, who plays Eddie Rico, the eldest brother, pitch perfect.  A former mob accountant, Eddie's gotten out, left NYC and is running a laundry company handling industrial jobs like hotels.  He's married to a girl from the old neighborhood who talked him into getting out - and he's domesticated and ready to adopt a child when he's reminded he's still taking orders from New York.  And on the heels of that, he finds his brothers have been involved in a hit, and aren't following the mobster playbook.  One of them fell in love and grew a conscience.
Throw in an old school Italian mother (Argentina Brunetti) who sees her ties to the mob as a good thing for she and her family, when not genuflecting, and it's more than the usual mob story, and hints at what's coming in mob fiction.
There's no white-knight cop in this, nor any sign of law enforcement.  Nor is there anywhere to go where the New York mob hasn't syndicated operations.  As noir, it's about a character's belief in people, despite the fact they run a system that was always murderous, violent and corrupt.  He may have walked away as a friend in his mind, but he had never truly walked away - especially with his brothers remaining entangled.
There are some phenomenal scenes in the film (Conte waiting all day with the local boss in his hotel room), and Conte's scenes with his mother.
But at the end of the day, the film has a very weird Hollywood ending that just doesn't fit everything we saw before.  And absolutely can't have been what was in the original novel by Simenon or in the original screenplay.
Still, worth watching.  Sometimes it feels positively modern.

PODCAST: "The Descent" (2005) - a Signal Watch Canon PodCast with SimonUK and Ryan 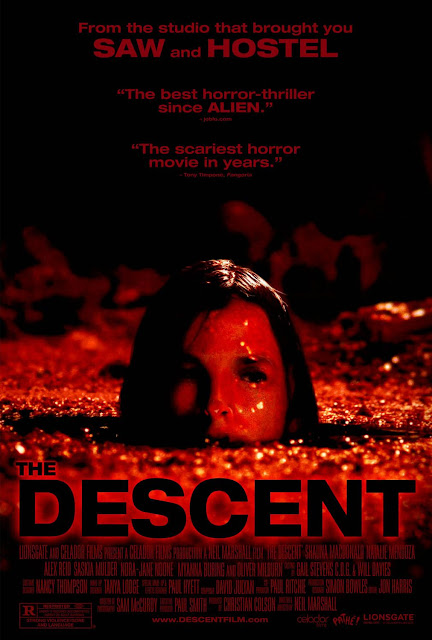