Went to go see Brighton Rock, a British movie of the film noir genre. Pretty darn good stuff. I found myself oddly immersed in the movie, and really liked the rising intensity of the film.

Also, looks like they're remaking the movie with Helen Mirren as Ida.

That sounds like it could be interesting. And you should be allowed to remake most movies every 60 years or so (most, not all).

Well, pretty clearly I will buy this.

To celebrate 75 years of the various companies that now fly under the flag of DC Comics, Warner Bros. is releasing a doc talking about DC's heroes in comics, media and culture. And there's some terrific Gary Frank art on the cover. 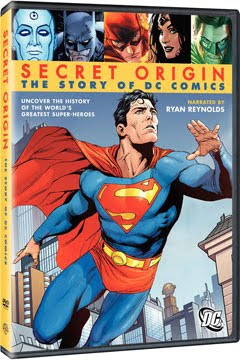 What Was the Point of That?

But if I tell you "I have a pair of red shoes at home" and then, that afternoon say "no I didn't!", you're not hoaxing, you're lying. And while lying to certain people (police, judges, waitresses at Macaroni Grill, your spouse) isn't just okay, it's hilarious... simply misrepresenting the truth isn't really a "hoax", nor is it even funny. And when you're running a comedy site, your job is to be funny.

You may recall that yesterday, at wacky links site Randy and I share, we posted about the nutty girl who found a great way to quit her job? And you thought: Wow! That's really great and hilarious! Even if a "garbage dispenser" makes it sound like garbage is coming out of the trashcan, which makes no sense, but... whatever. That girl has moxie!

Only to find out: HA HA, THAT NEVER HAPPENED AT ALL!!! We totally made that thing up, because it WOULD be awesome if it happened. Also, we wanted to take pictures of good looking young women. And while it temporarily drove up hits, and we've forgotten that one basic tenet of comedy is that "it's funny because it's true", we totally bet when people think thechive.com (which, you know, sounds like theonion.com, and those guys made it work), you're totally going to think "oh, those cads! They're quite the scamps! I should check in and see what shenanigans and charades they've concocted this time to tickle my funny bone!"

It was kind of overshadowed by the very real case of the flight attendant popping a cold one and exiting the plane action-hero style. Now THAT GUY is awesome.
Posted by The League at 8/11/2010 10:51:00 PM

Yeah, I don't get the hoax. And I find it annoying. Because the revenge part wasn't true, the fakeness of it is just that much more of a reminder of how rare it is to be able to make an awesome escape from a terrible work situation. Which, as you pointed out, brings us to this flight attendant. Who, apparently, WAS awesome...