So in reading two separate Batman comic-news related bits, I couldn't help but notice that DC seems to have maybe moved to David Finch's Batman: Earth One design for Batman in the mainline titles.

It's not a drastic redesign. Mostly, Batman's belt looks a little different and we see the return of the yellow oval bat symbol on the chest. Also, look! Where are his blue trunks? It's like he's bat-nude!

From the announcement art on Batman: Earth One. 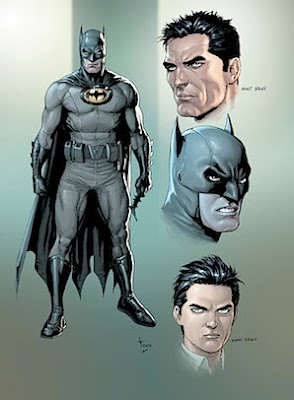 From today's article about Batman, Inc. 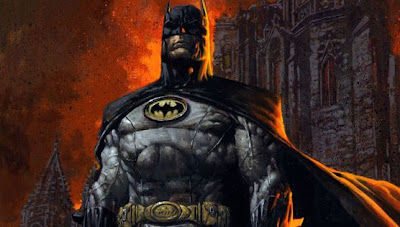 Also from the Batman, Inc. article, but it looks like this may be some canned art from Batman: Earth One 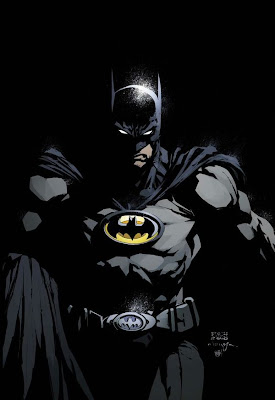 article on Batman: Earth One at The Beat.

Who knows, though, really. In watching the Robin documentary on the Red Hood DVD, the editors had cut in many shots of the wrong costume, wrong Robin, etc... interrupting the flow of the video for anyone who ever read a Batman comic and wondered "why do they keep showing Tim Drake when they're talking about Dick Grayson"?

My suspicion is that someone has Earth One art lying about and had to use it as its the only art anyone has on hand with the yellow, oval bat symbol Morrison was talking about.
Posted by The League at 8/10/2010 05:22:00 PM

Email ThisBlogThis!Share to TwitterShare to FacebookShare to Pinterest
Labels: batman

I guess DC is going with the same idea as in the Flash comic where Barry and Wally are both the Flash albeit with slightly different looks. Looks like Bruce will have the yellow oval and Dick will just have the black bat.

I think I need some time to process that idea. It doesn't strike me as organic as the Barry/Wally/Jay thing, but I'm willing to give it a chance.

To make matters even better, or is that worse, Bruce Wayne Batman will be travelling around the world training the Bat-Men of many nations.

I actually kind of like that idea. Its not Batman hanging out in alleys punching thugs, but I've also read comics for 20 years that were roughly Batman in alleys hanging out and punching thugs. I'm kind of ready to see Bruce Wayne do something different.

And, dear Lord, I can't take one more Batman story with Batman fighting to stop a gang war in Gotham. They have so solidly beat that dead horse.

I like things like that: they expand on what's in existence, but shake up the status quo in a meaningful way. It's sort of like "oh, yes. This does seem like something that you'd eventually think might be better than fighting a one man war against crime."