So Long to "At the Movies" 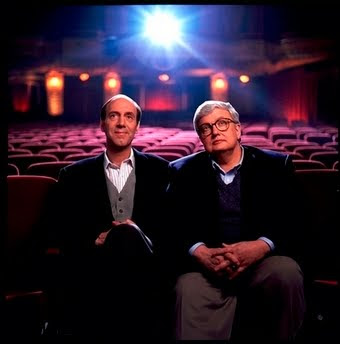 Nathan C. has talked a bit about this topic, but At the Movies airs its final episode this weekend.

Yes, the show ran for 35 years. Which means it aired as long as I've been alive. It's been spoofed everywhere in popular culture (I liked the Animaniacs episode, in particular), imitated endlessly, and championed movies both big and small. Lots of people are eulogizing the end of the program, and I recommend looking around for those articles.

The show took a hit when Gene Siskel passed in 1999, and another when Roger Ebert had to step away from the cameras in 2006 when he became ill (I never heard what became of Roeper). I felt like the past year, the show was returning to its Siskel & Ebert hey-day under Scott & Phillips after not caring for the awkward Lyons and Mankiewicz team. In an era when you can confirm or deny your suspicions by surfing to Rottentomatoes.com, and every jerk with a blogger account can shoot his mouth off (ahem), "At the Movies" fell off as a cultural touchstone. And, of course, Siskel & Ebert had become such icons, losing both left viewers wondering why the rotating cast of characters, etc...

One thing I love in the comment section here at Signal Watch (or back at League of Melbotis), is the spirited debate that can carry on in the comment section when discussing the merits or problems of a movie. Loving movies does not mean that there's a body of work that's always going to be agreed upon, and the two-headed monster of "At the Movies" was always the best indication that even the people who've seen it all won't agree, and those debates aren't concocted just for good TV. The hosts always truly believed what they said, and could mount a spirited defense (or offense), and left it to the viewer to vote with their wallet.

Although I was not likely to tune in every week, I can honestly say the show would often convince me to see or avoid movies (and I still check in with Ebert's online reviews. The man is just a punchy writer) far more than even word-of-mouth from friends and family.*

Sadly, the balcony is now closed. At least on the Buena Vista Television syndicated program. I wouldn't be too surprised to see current hosts Scott and Phillips find a new home and carry on elsewhere. Clearly, they're having a ball.