I was fortunate enough to recently receive a review copy of an independently produced comic which will be released next year by Arcana, sent to me by one of he writers of the comic, Ryan Colucci.

Harbor Moon is a graphic novel in the truest sense of the term.  Colucci and company did not originally release the comic as a series of issues, and its great to read a comic that flows based upon the needs of the story rather than upon the artificial stopping points necessitated by a 22 page release format.  Instead, the story unspools much more with the feel of a film script, and given the fact that Colucci actually works in film, it doesn't seem like a huge stretch to guess that this is a project he was happy to see materialize either as a comic or a movie. 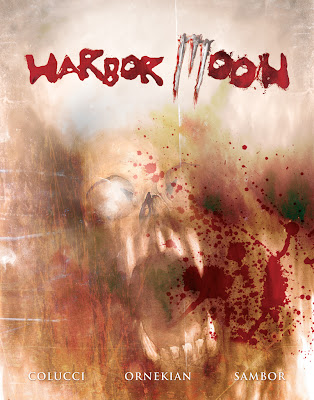 Likely the first thing to grab someone browsing the shelves and looking at this comic will be the art.  Three artists are listed:  Pawel Sambor, Artist; Karol Wisniewski, Art Director; and Nikodem Cabala, Supporting Artist.  I have no idea who did what work of the three as those are unusual job titles in comics, but this is also an unusual and striking book.  Its a pretty wild mash of traditional illustrative comic book with what appears to be water color enhanced with some CG.  I have to guess that page layout was done digitally, which works perfectly well.

The style has definite, vague echoes of McKean, or late-80's Sienkiewicz and  John J. Muth, or even Sam Keith's more expressionistic work in The Maxx, without ever feeling particularly derivative.  It just has that same ability to capture a mood with washes and tones and experimental use of color and line, which does what comics can do best, and that's use the art to enhance and relay the narrative rather than just illustrate a script.

I invite you to jump over to the Harbor Moon gallery page to take a look at what these guys did.

As with the artists, there are three writers listed on the comic, and its hard to know who contributed what.  Ryan Colucci, Dikran Ornekian and Brain Anderson all receive writing or story credit.

If you're looking for these things or tend to notice them, there's definitely a sense of the cinematic to the writing, and I can't exactly put my finger on whether its dialog or a very filmic pacing to the events that made me think "movie", but its not distracting.  Instead, the flow of the story does seem to work in a sort of slow-boil mystery as circumstances reveal themselves and the facts of what's happening in the strange, small town of Harbor Moon, Maine reveal themselves.

Harbor Moon isn't exactly a horror story, although there's certainly elements of more than one horror sub-genre to be found within the comic.  Is it a potboiler as Tim uncovers the mystery of the identity of his absentee father and why everyone in this small town denies knowing him?  Is it a supernatural mystery? 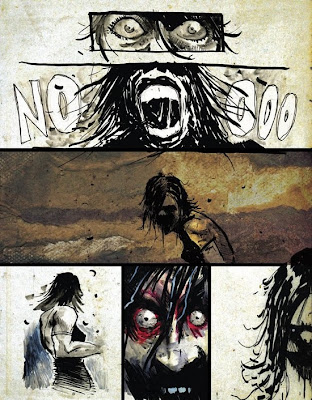 The characters of Harbor Moon are well defined, if not grippingly original.  It fits the subgenres put together here, and I think the conclusion is more than satisfying.  While scripting occasionally feels like it could be a bit punchier, where things could have swung into melodrama or the plot could have bogged down and become frustrating as the answers are slow to reveal themselves (while other mysteries bubble up), I think there's a lot to like here, and I suspect Colucci and crew have ideas for sequels to this comic that would do wonders for exploring the premise they've established.

I was impressed with the ability of the writers to create different paces and tone within the story, really bringing the reader in to Tim's perspective and the seeming chaos which erupts, then pulling back in the investigative and character building moments (with the artists following suit).

Okay, so...  This is a comic in which we find out there are populations of werewolves out there.  And not necessarily the cuddly werewolves of the vampire books that shall go unnamed.  Its a genre I like to see explored, especially in comics where your budget isn't a limitation, nor is CG modeling, and the artist's imagination can really cut loose.  And I think we see that here.

Unfortunately, I think the reveal isn't a huge surprise if you're up on basic horror genre tropes.  But the execution of how the werewolves in handled is unusual in appearance and solid in narrative and story, as is the other challenge to the lead characters.  But it does raise the question of why the story is slow to reveal the werewolves if the writers didn't do more to obfuscate clues and, I have to say, mention the werewolves in their press materials.

Likely one of the biggest challenges Colucci will face as this book hits the shelves is that there are echoes of Clive Barker's Nightbreed, especially as we hit the third act.    How many people remember that movie or book is an unknown variable, and I certainly don't believe that Colucci's story is a rip-off but I think horror-genre fans could make the comparison and neither material would suffer for it.

Harbor Moon is a fun read, and I sincerely hope that this book gets noticed upon its release.  I placed the artwork as the first item to discuss as there's no question that very little else that appears on the shelf has a look as potent as what the team here has assembled.  While the visuals are a huge draw, the story and characters are well defined and interesting enough that its a great new entry for the horror and mystery genres in comics, and the kind of storytelling that comics can do remarkably well when a team like the creative team here puts their minds and backs to it.

This isn't a comics game-changer, but it will be interesting to see who discovers the book as it seems the appeal would extend to the general public pretty handily.

First off, thank you for taking the time to read the book and post such a positive review. We’re really glad you enjoyed the book, as it has been a labor of love for quite some time.

There were some questions in there, that may have been rhetorical, but I love talking about this stuff, so I’ll try and shed some light on them…

I dove into making this without having a clue how to make a comic. I had just produced an animated feature film (Battle for Terra 3D) and thought – if I can do that, I can do this. It wasn’t that easy… And that is why the credits are probably more film credit-like than comic credits.

The script was written by myself (Ryan) and Dikran. While we were at USC’s grad school for producing, I optioned a script called ‘Bloodkin’ by Brian Anderson. Although it was more like an X-Men story about a government experiment of a half-werewolf/half-man, with politics and action, etc… We loved the core concept and decided to take it to a much darker place, making it more of a mystery. And since we loved the idea of this town being more like a town from the old west – we were really inspired by Pale Rider, High Plains Drifter (both Clint Eastwood westerns) and Bad Day at Black Rock. I’m actually not familiar with ‘Nightbreed’ by Clive Barker. But I just looked it up and can’t believe that I haven’t seen it because I love David Cronenberg. So it just jumped to the top of my Netflix.

Pawel Sambor is the artist here. He drew, inked, painted and lettered everything. There is an old tome in the middle of the book (when our hero reads it, you do as well) that Nikodem Cabala did. And Karol was the person holding it all together. He oversaw all the artwork and got it ready for print. Without him, there would be no book.

We definitely have ideas for sequels. In fact, this was written to be a trilogy. And we always planned to do a book on the ‘Brotherhood of the Moon’ – an organization that hunts werewolves under what they believe is a religious doctrine. Karol also has an idea for a book that will follow a few of the characters in the lead up to the beginning of ‘harbor Moon’. This all depends on everyone’s reaction (ie can I sell enough to justify this).

I don’t think we consciously left out that this was a werewolf book in any press materials. Because to us, it being about werewolves wasn’t the surprise. It was more – which characters are the werewolves? It’s like when you see a murder-mystery, you know there is a killer, but you don’t know which character is the killer. That mystery was more important to us than that of the werewolf reveal itself. Part of why our hero doesn’t see werewolves, and thus the reader as we see the story unfold from his POV, is because it would have ruined that mystery. We had long talks about having a turn in the opening scene (you can actually read the first 20 pages on the website in the gallery)… but ultimately decided against it. I forget why right now to be honest – but maybe we should have… That’s a good point.

I did have a reviewer actually say – I didn’t realize it was a werewolf book until the page when we see them. I guess if you just pick the book up not knowing anything about it and are cruising through you could miss it, but again – trying to keep this a secret was never our intention. I always thought it was pretty obvious.

I love a good comic discussion… so I appreciate you letting me post here and thanks again for reading the book. You are awesome.

Ryan C., thanks so much for chiming in! Its great to get this kind of insight to the creative and production process.

Best of luck as you guys hit your release date!