We've already covered some of the New 52 in a previous post, and discussed Action Comics #1 at length.

In this installment, we'll discuss OMAC, Men of War, Static and Swamp Thing.

OMAC - written by Dan Didio and Keith Giffen, this title resurrects the Kirby creation from Kirby's reunion with DC and DC's decision to let Kirby pretty much do whatever the hell he wanted to do.  Like a lot of Kirby's work post-1960, its almost impossible to ignore the sheer energy of that series and to want to capture some of the residual energy of that era that's still rippling through the DCU 30-odd years later. 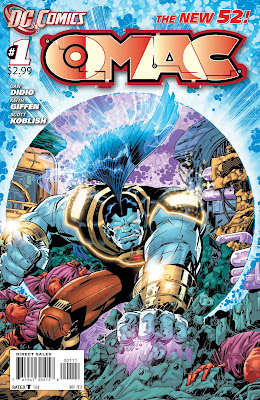 I was not going to pick up this comic as what little I've read by Dan Didio hasn't been my cup of tea, and I wasn't really sure I needed another swing at OMAC, after reading the painfully bad Bruce Jones OMAC series circa 2006.  And I'm not entirely sold on this series yet.  Didio and Giffen are trying very hard to summon the spirit of Kirby in pacing, dialog and design...  but in 20 pages, pretty much nothing happens and I know less about this OMAC than I knew going into the issue.  I suppose there's supposed to be a mystery here, but much like Justice League #1, it feels like the first few minutes of a movie intended to draw you in, but in this case, its not fan-favorite characters like Batman and Green Lantern, its a new, blue OMAC just tearing up Cadmus.

What's most puzzling is that, no doubt, Didio is the primary architect behind the DC Relaunch and has the most to gain and lose based upon the success of the effort.  And yet...  I have no idea what a "new" reader would think about this issue.  Unlike the original OMAC, we don't meet the face behind the mohawk until the end of the issue, and then, its a blank slate.  I just don't know if this was a particularly compelling first issue.


As a veteran reader, I'm not sure I need a pastiche on Kirby when there's so much original Kirby material out there, and there's not enough here to draw me in for a second issue other than to say "oh, yeah.  This is that Kirby knock-off, like GodLand.  That project at Dynamite.  DC's use of New Gods.  The Marvel U.  Etc...".

The book does have a certain old-fashioned charm to it, and is really, really pretty in its homage.  In fact, I LOVE the design on OMAC (its just alien and crazy enough that it feels almost like Kirby updating himself a bit).  But I think I'm going to just go back and re-read my Kirby OMAC collection, and if this gets good reviews, I might pick up the trade.

The main story follows the grandson of DC's WWII hero, Sgt. Rock, who appeared (along with Easy Co.) primarily in Our Army at War, not Men of War, which featured Gravedigger, Enemy Ace and others.  I'll cut to the chase and say:  the tie in with superheroes and supervillains completely lost me. 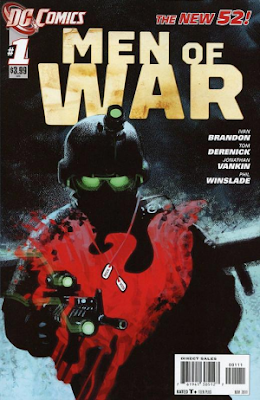 This is a beautifully drawn book (Derenick on pencils), but I wasn't too jazzed about the story.  The main tale is primarily about the grandson of a famed WWII hero making sure he doesn't get promoted in order that he avoid sharing the name "Sgt. Rock".  For some reason.  I'm just not terribly inclined to follow up on a story I saw as a lot of plot contrivance.  Its just not really interesting enough that our new Sgt. Rock stand in doesn't want the family name to keep it a mystery as to why.  You know in the old Rock stories Rock would have just said why in a caption and been done with it.

Writer Ivan Brandon is trying to bring the sort of grit we see in current war movies to the DCU, and its an odd fit.  We tell different stories in different genres, and I think if you look back at those first Rock stories (I'm currently making my way through Showcase Presents: Sgt. Rock #1), almost invariably those comics were about how the men of Easy Co. sacrificed and stood tall against crushing opposition with Sgt. Rock at the center to hold them when they fell or to remind them that they're all they've got in the fog of war.  This story seems to be about a guy with a beef with his family, but... after 20 pages, who can really say?  And it seems almost petty.

Maybe Brandon will get there, but this isn't any GI Combat #68 nor Our Army at War #81, telling us who these guys are and why we should care.

I think, even with the weirdness that would show up in Enemy Ace and occasionally in Sgt. Rock, soldier stories and the horror of war side-by-side with superheroes is a jump between genres and the tones of those genres, and its something we'll revisit while talking about Swamp Thing.

The supporting story does, in fact, feel a bit more like an 80's-era warbook with lots of acronyms and the explanations there-of.  Lots of imagined combat speak (I realize, I have absolutely no idea what chatter sounds like with men in combat, but I don't know if that's what I should be thinking about while reading the comic instead of the story itself).  I think Phil Winslade is an interesting choice for art, and it seems to work.

But even in the few pages we get, the story seems to telegraph its plays, lifting from post-Vietnam era war movies.  Nothing new here, but capably done.

Static Shock - Its more than a bit sad that Dwayne McDuffie couldn't have been part of the re-architecting of the DCU.  I'd have loved to have seen what he might have had to say in bringing in the Icon characters fully into the DCU.

I'm very much getting tired of repeating myself, but - who ARE these characters?  One would suppose the Hawkins family will act as Static's supporting cast in perpetuity, and we get little snips that they've recently moved, that Virgil now has two sisters (I didn't get that - but I'm not overly familiar with Static).  Yeah, its a lot of fun to see Static aloft on his... hexa-thing-ma-jig, and to see the nigh-Barry Allen approach the writers hope to take with his power set and use, but...  we seem to spend the most time in dialog with the un-named villains than we do learning anything about Static. 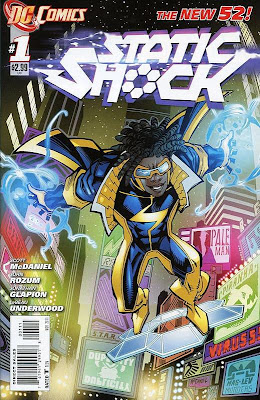 While I understand DC didn't want to reboot everything...  a book about a teen superhero seems like a perfect book to relaunch in its entirety.  The last time Virgil Hawkins got that treatment, Malcolm X caps were so in style, they were part of his outfit, and the lower end of DC's demo for the relaunc hadn't been born.

In the end, this book just feels too much like "generic superhero adventure" and not enough like a compelling  argument for $3 a month.  It kills me to say that as I had high hopes for this one, enough so that I'll pick up issue 2 to see if the writers don't start filling in minor details, like who the Hawkins are, why they're in NYC, how Virgil got his powers, who Hardware is, and why I should care.

Swamp Thing - This book and Animal Man are the books that I suspect a lot of people are going to be talking about.  Writer Scott Snyder brings straight-up horror back to the DCU proper in a way I don't think we've really seen except (unintentionally) in Geoff Johns head-imploding scenes of that one issue of Titans.

I really enjoyed this issue, even if I haven't kept up with Brightest Day as I ought to have (I'm waiting on trades), and skipped the atrocious Brightest Day Aftermath - Let's Read about Swampy and John Constantine series after I'd mucked my way through the first issue.   Snyder basically gets us up to speed as to the fact that this Alec Holland fellow was Swamp Thing, now he's not, and he's basically sort of freaked out about what may or may not have been happening the past few years.

From the first panel, there's no doubt this is happening squarely in the DCU as Snyder plays on the recent mass deaths of birds and fish in the US and elsewhere, as birds die in Metropolis, bats in Gotham and fish in the deep blue sea (in the presence of Aquaman).

Our new version of Superman appears, and its a reminder that we're going to see Superman hanging out with Swamp Thing for the first time in 25 years (and maybe since that issue of DC Comics Presents).

Now, I'm not a Swamp Thing fan from small times, but I have read some Swamp Thing back in the Vertigo hey-day, some of Moore's Swamp Thing, and even tried to read that Tefe Swamp Thing series (it wasn't worth it).  I already know I'm predisposed to liking this character and the horror aspect.  Its just... weird to see it back in the DCU after all this time.

I mentioned this book during my Men of War chatter as I do wonder about horror's place in the New DCU.  And this book most definitely takes on some pretty strange and dark stuff in the latter half of the issue.  After seeing Superman in the first few pages, its a bit wild to see some of the Vertigo-like twists that occur.*

Now that I'm calibrated, I'll most definitely pick up the first several issues of this book, as Snyder most definitely has me hooked as to "what the @#$% is happening here?".  And, honestly, I want to see if it ties in at all with Animal Man.

So that's it for what I picked up  last week.

This week I am picking up Superboy, Mr. Terrific (I'm freakishly excited about this book for some reason), Batwoman, and Frankenstein - Agent of SHADE (I KNOW why I'm excited about this one).  I'm on the fence about Legion Lost and Demon Knights, so any input is appreciated.