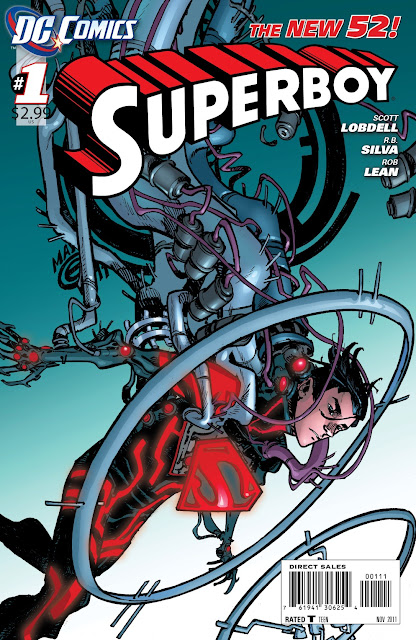 Right out of the gate I'll be clear, I quite liked this issue of Superboy.  Its got its faults, and its got its problems, but of what I picked up this week, this is the book that actually surpassed my expectations the most.

I don't follow Scott Lobdell, and knew mostly of his association with Marvel from back in the 1990's (and I think its worth noting that DC's current Editor-in-Chief is Bob Harras, who had the job at Marvel back in the 90's).  Here, he manages to de-couple Superboy's origin from the more familiar Death of Superman/ Reign of the Supermen storyline from the early 90's, and instead cleans up the story a bit, and keeping the focus on the fact that from the first panel, we're talking about a clone.


Having had just re-read We3, its interesting to read another comic in which super-science with a military application may have overstepped its boundaries in regards to creating a lifeform it doesn't understand.  This one, however, is processing things on a far different level than our friends in We3.  Its not all-new groundwork, especially in relation to comics and the original origin of Superboy himself, or the retro-fitting of Superboy Geoff Johns did in Teen Titans and Adventure Comics in order to make the character more understandable and appealing.

Lobdell lays a lot of seeds for future developments, whether he'll choose to follow the path put before him by previous Superboy storylines or not.  And he's clearly got a longer arc mapped for the character, with a lot of potential, I think, for an interesting story, even if it does seem, perhaps, a bit familiar.  To that end, Lobdell did surprise me with a few scenes, laying red herrings, so I'm currently very optimistic about what he plans to do to keep me guessing.

Superboy, in this series, is not, uh...  created (?) by Cadmus, but by N.O.W.H.E.R.E., an organization it seems I recall only seeing previously in Doom Patrol, possibly.  I'm okay with losing the Cadmus tie, as Cadmus is wrapped up in OMAC at the moment, and as Cadmus tends to be a bit more of a known quantity, its an interesting change.

We also will seemingly not be getting the Poochie version of Superboy out to show adults he is plenty "in your face", nor are the writers starting out by characterizing him as "the slow one" (given whose DNA Kon-El was carrying around pre-Flashpoint, this sort of struck me as an odd choice).

The art is a bit workmanlike, I admit, and it detracts from the overall tone of the story.  Why are the scientists all wearing armor?  And the women scientists in armor with a skirt and leggings?  Or helmets?  It just strikes me as an odd choice, unless the artist is that limited in range.  Frankly, it creates a weird discrepancy between what I think Lobdell was trying to do in tone versus what ends up on the page.*  I understand these books needed to be put out in a rush, but this is one of those places where a little more thought might have achieved a comic that does something other than look like every other comic on the stands.  How interesting is it for superheroes to be created by a room full of people who look like superheroes?  Don't we lose some of the wonder if its not people we might see at the grocery tampering with powers beyond what they should?

I won't blow the surprise of the supporting character, but that was completely unexpected.

But I will say, I really like the hook they've found for Superboy's first arc, as summed up in the final page.  I think I am very much on board with the potential for the character's storyline.

The story is very different from what we're seeing in Young Justice on Cartoon Network, but I think there's a certain, underlying attitude to the character that's the same.  While Superboy on that show has only really begun his arc, the idea that Superboy was always bred as a weapon is strong stuff, and I think Lobdell could do good stuff with this.

The approach to the Superbooks is already very different in tone, and how Superman is discussed across the DCU books I've read is so different, the rest of the relaunch may flop, but this is the first real change in status I think Superman has seen in a lifetime.  Just an interesting time to be watching The Man of Steel and his counterparts.

On a final note, FYI:  it appears the cover is largely symbolic.  This is not a story about a robot, but a clone. So...  do with that what you will.  However, I think that's the costume we'll see next issue, and its kind of cool.