Another week of wandering into Austin Books and finding not just a larger-than-usual crowd, but that demand for these New 52 books is pretty darn high.

I picked up a handful of books this week, including non-DC material, including Mark Waid's Daredevil, which I may talk about separately, because, gosh, the first two issues were pretty good.

I also finally brought home a comic I've had on lay-away at Austin Books, an original printing of Superman vs. Muhammad Ali.   Its one of my Holy Grail comics, so its a little weird to have it in the house after looking for it for about 7 or 8 years.

Written by Eric Wallace, a regular writer for TV's Eureka, and art by Gianluca Gugliotta (someone I'd never heard of), this was a book I'd been looking forward to based almost entirely upon my love for the character during the previous run on JSA under guys like Geoff Johns.  Terrific's role in Rucka's tragically under-read Checkmate really reinforced what a great character Michael Holt can be mixed in with the usual fisticuffs of comics.  I liked that Terrific was a science-guy, but one that seemed to stand at the back of fights to sort them out rather than building a suit of armor and charging in (we've got that in a lot of other tech-savvy characters).  Sure, Terrific is some brawn, but a lot of brains.


The comic retains some of the basics of Michael Holt's origin, that he's a genius along the lines of Bruce Wayne or Lex Luthor, but without the (same) baggage.  He lost his wife to a random accident and emerged seeking to make the world better with SCIENCE.  In this version he still likes to build cool gadgets, mostly into his T-spheres.

Wallace adds several new ideas to the technology and origin that takes Terrific in a slightly different direction (stuff I can support), and gives him a technology company under his belt, which makes sense, but it seems the DCNu is comprised of the Steve Jobs, Larry Pages and Mark Zuckerbergs of the world dressing up in weird outfits and punching each other.


This is a tough one, because I honestly liked a lot of what Wallace did, especially in the abstract.  But in the execution, the issue feels extremely rushed and with so much exposition, it can feel like this comic goes from being for a new reader to being written as if Wallace doesn't trust the audience at all.  It can be a bit frustrating that Wallace chooses to both show AND tell, when showing is usually enough.  That said, unlike a few other #1's of the relaunch, this comic is most definitely a fresh start and doesn't drop the ball on welcoming new readers.

A supporting cast begins to take shape for Holt (including an executive with Power Girl's secret ID and running Starware), and a mystery begins to form that leads to the cliffhanger for the issue (without ever really revealing a major antagonist).  I'd be remiss if I didn't mention the extremely odd confrontation between Betty and Veronica fighting over Archie in this comic.  That was just... awkwardly handled by both Wallace and the artist (and I kind of have to blame the editor for not slamming the brakes on that one).

In some ways, if you can get over the clunkiness of the expository dialog, the comic is actually fun.  Mr. Terrific flying about London atop T-Spheres is a new and zippy idea.  But readers who get over the exposition are also going to need to get past the art.

I rarely will condemn a comic because the art wasn't to my taste, but the work of Gianluca Gugliota is just isn't up to professional quality, especially hitting the racks on the same week of a JH Williams Batwoman book.  The book is kind of a mess, and I was left wondering if some of the dialog was there to ensure readers wouldn't get lost in the muddy pages and completely inconsistent manner in which Michael Holt is drawn.  Its a shame, because a clean-looking book seems only appropriate for this character, and the JG Jones cover seems to nail what could have been.

I'm going to pick up issue 2, partially because I did like the concepts and I did think the book has potential to be fun.  But anymore unnecessary exposition, and I'm out.

I've been reading Legion on and off since the Mark Waid reboot of several years ago, and was willing to follow the series right through Legion of Three Worlds, but DC was going to have a hard time selling me on this book for any number of reasons.  Its Legion outside of the 31st Century (and we kind of did this last during Countdown, and then the New Krypton storyline about 16 months ago), and because, honestly, I've never read a Nicieza book that particularly impressed me.

This book continues that trend.

Apparently the Legion books are going to do what they've been doing since Levitz returned, and that's not bother to slow down or acknowledge we may have some new readers onboard who aren't in their 30's and older who aren't already intimately familiar with the 70's and 80's versions of the Legion. I'm semi-familiar with the era, but only through reading a few trades.  DC, as your friend, I have to tell you that this approach is a bit unhealthy for what could be a pretty fun corner of the DCU for new readers.

Whether you're basically into Legion or not (and I basically am), this book is a chaotic mess that fails the prime directive of the September relaunch, and seems to believe its a spin-of mini-series intended for the already dwindling Legion audience.  At every opportunity it fails to explain who anybody is (I'm okay with this as a current Legion reader) and only partially why anything is happening (which...  you've got twenty pages).  I'm not picking it up again.

And its making me nervous about any additional Legion reading when this seems like a good opportunity to de-couple from a few books.  So, yeah.  If I was that kind of writer, I'd make a joke about how" Legion Lost lost me - as a reader!", but I'm not, so I totally did not make that joke.

Finally picking up where Detective Comics and Batwoman #0 left off, this issue continues to utilize the phenomenal talent of JH Williams, which made such a huge splash on Detective about two years ago.

This is an interesting book in that I suspect it would take folks newer to comics a bit of extra effort to read, and folks very new to comics may not appreciate the extraordinary talent of JH Williams III as an artist, and his ability to change styles, manage page layout and design etc... But I think there's still plenty there.  And while the book is definitely grittier, aimed at a more mature audience, its a fun read.  I love how much Kate Kane has been infused with so much character with so few appearances. 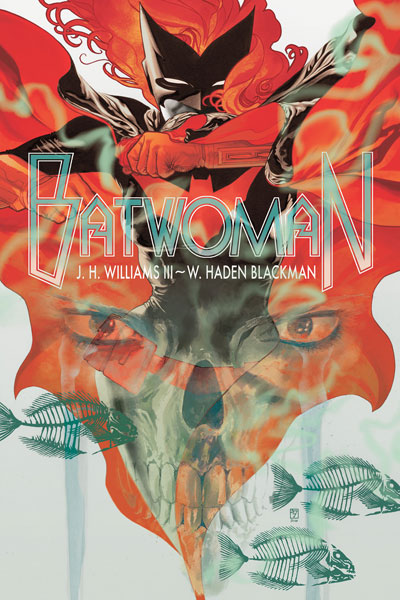 It does seem JH Williams and W. Haden Blackman are going a bit more "super-hero-ish" with their take than Rucka, but it all still feels very much in character and how the Kate Kane we've previously met might approach the situations superheroes run into.

Its not entirely a friendly issue for first time readers as there is some back story here, but there's a few places in the book where Williams has provided synopsis as best he can (and beautifully drawn) to get the reader up to speed.  But, as I said, its going to take some work.

I'm excited to learn more about Kate's new protege, the fallout between she and her father from the Detective run, Kate's possible new romance with a great DCU supporting character, and, of course, see what Williams and Blackman have cooked up with our mystery and villain.

Of my books, this was the one I've read thus far that caused me to let out a low, impressed whistle at the end.  Will definitely be adding this to my list of regular reads.  It may be my only monthly Bat-Book until Batman Inc. returns.

As a fan of Morrison's Seven Soldiers series, a fan of the Shelley novel, the movies, Lemire's other work, etc...  I went into this book knowing I would be pre-disposed to the goings-on of this first issue.  I am thrilled someone has seen the potential in what Morrison seemed to be doing in Seven Soldiers and picked up on it (now, a Bulleteer series, please?).

Lemire doesn't get into much detail here, but the set-up seems straightforward enough.  Frankenstein's monster is a soldier working with a secret organization called SHADE, which includes a whole lot of super-science and name DC players like Father Time and Ray Palmer.  There's a fine line between Super-Science and Mad Science, and it seems SHADE plays both sides of the fence. 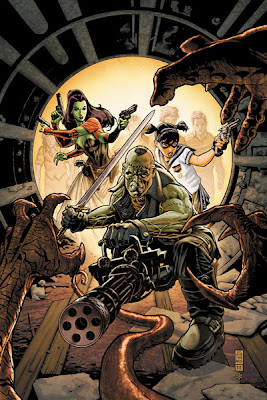 Demons are unleashed on small town USA, Frankenstein goes in, especially once he learns his "bride" has gone in before him and they've lost contact.  SHADE provides Franky with his new back-ups, the same Creature Commandos we saw in Flashpoint: Frankenstein and the Creatures of the Unknown.

This book is intended to be movie-horror, big-screen adventure, and it works.  Its not a perfect book, but this book said "fun" to me, and that's something I was looking for in the relaunch.

I did note CanadianSimon didn't care for the artwork.  I guess as I read this back-to-back with the artwork of Mr. Terrific, this seemed okay by comparison, but I still think that DC may have pushed these artists to rush more than necessary to get their issues out on time, and I might have liked to see someone else tackle this book.  C'est la vie.

I have heard this book switched artists, so perhaps it really, really was a rush job.

Anyhow, give it a flip-through if your local shop has any copies left.

Looks like we are in agreement on Batwoman. What a beautiful book but you can see how it wasn't originally setup to be part of the DCnU. Although everyone should go double dip on this title.

I went back and re-read Frankenstein and I notice that he art got progressively better. It seemed to reach it's high point in the two page splash where Frank yells "Then Have At Them" and continues to be good until the end of the book. I have to think that Ponticelli was under the gun to produce this issue as he seems to be pencilling and inking his own work.