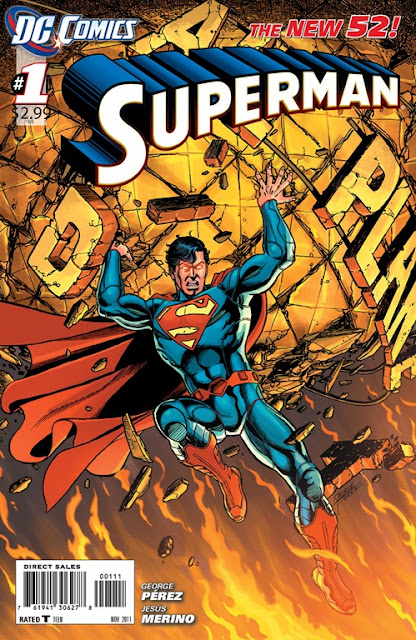 If any comic from the New 52 embraced what it means to explain the new status quo in a digestible way for a new reader who may only be vaguely aware of the existence of Superman, this book has tried the hardest to be that comic.  It doesn't always succeed, but I'll spoil this review by saying: this is one of my favorite books of the relaunch, and not just because its Superman.  In fact, I would say I went into this book deeply skeptical of "change for change's sake", and was won over by the team of Pérez and Merino.

I'm going to go ahead and take up a sentence or two here to say that Chris Roberson deserves a huge nod for his work on Superman, especially with the matzah ball he was handed to correct in Grounded.  Somehow out of that mess, Roberson went on to create some of my favorite Superman comics of the past several years, and set the bar especially high for even an industry vet like George Pérez.  I'm just glad that, like Superman swooping in at the last minute, Roberson ended that volume on a high note.

Like a real storyteller, with actual storytelling skills, who understands that stories aren't always literally about two grown adults in funny outfits punching each other, Pérez manages to tell a story that's not so subtly about taking down the past and turning your face to the future, even when its making you uncomfortable. The first pages witness the ending of a symbolic landmark in Metropolis, something we're all familiar with. "Superman fans," Pérez seems to be saying, "even Superman isn't happy about this new state of things, but there's so much opportunity if we move forward and quit looking at the comforts of the past". As much as its almost comforting to wallow in the question of how and why things were changed, I like the fact that the discomfort generated by change is played up.


We're introduced to the supporting cast, including some new names and faces mixed with the familiar (is it totally nerdy that I cheered a little when Ron Troupe made an appearance?). And some of our old favorites are in new roles. The Daily Planet is established as one of the most reliable news sources on Earth, but like the 1970's portrayal where The Planet was merged with GBS, here we see the Planet Global Network*, run by a hard-nosed media tycoon who may or may not be cut of the same cloth as Rupert Murdoch (yes, its Morgan Edge once again, but without a cigarette holder and recast as African-American). Its a logical move for explaining "why a newspaper in 2011?", and it gives a new dynamic to the differences between Lois and Clark as Lois' ambition and instincts have placed her as lead of the multimedia portion of the group as well as control over part of the network news. Meanwhile, our Clark (in direct opposition to the extremely complicated decision to make Clark a news anchor in the 1970's) has chosen to stick with print despite its clear status as the dinosaur.

All of that is of course interesting stuff for the Superman fan, but there's also a certain level of competence and craftsmanship that I'm associating with George Pérez and his take on how a comic is supposed to look, work and share information. Right now, working, I'd say that perhaps 3 artists I know of impress me with how they handle a page in layout and design, and its something I've more or less given up on as DC ratchets down panel count per page and pages per issue. As responsible for both breakdowns and story, Pérez manages to compress as much information into one issue as you now see in three or four. Decompression simply isn't part of his vocabulary. Add onto the fact that he seems to know how to work with Merino to manage those panels and manipulate pacing and structure, and its a pleasure to see one of the old masters at work.

In honesty, after reading some of the old favorites come out of retirement to try their hand at comics in today's environment, the results haven't been uniformly terrible or out of date (I think Paul Levitz sounds as modern as the next guy), but other projects have been a bit painful or weird as either the voice has changed since the writer's heyday, or you can tell they're just super rusty. So bringing on Pérez had me pretty deeply skeptical of this issue and what DC thought was going to happen. Yes, I loved his work on the Wonder Woman relaunch from 25 years ago, but that was a time and place. Here - I wasn't sure.

But, yeah, I was quite pleased with what we got from a story-telling perspective, and who knows? Perhaps it will mean the end of slavish devotion to decompression and better use of those reduced page-counts?** I miss this kind of craftsmanship in straight-up superhero comics art, and I frankly think it will confuse and anger the 20-something comic fans who stumble onto this book.

Merino is in pretty good form here, working with complicated page structures, lots of small panels with tons of speech bubbled and dialog floating around. It had to have been hard to wrestle with this book. Instead of the usual 4-5 panels per page, we're getting 7,8,11 panels per page.  And when we do get a splash page, its makes sense.  Its not just because, oh, hey...  let's show them jumping off a roof.

I am now in the acceptance phase with the Superman costume. I don't love it, but its not driving me crazy. It seems artists who've thought it through are making it work. But it doesn't look like Superman, and I wonder how long this will last before the DC licensing people start talking about confusion of the brand (there's an ad for Hot Wheels cars on the back of the issue with a very 1970's-era Superman in the art - coupled with 80's-era José Luis Garcia-Lopez artwork. And they can brand it as much "DC Originals" as they want, but its what people think Superman looks like...

A lot does happen in this issue, and we've mostly only set up the current state for The Daily Planet while remaining at arms' length with Clark Kent himself, something I see as a bit of a problem in the "One Year Later" model, where DC characters couldn't talk about the last year for a year of their titles. I'm now guessing the first arc of Action Comics is going to take us a bit further into Superman's career than I guessed, and that's okay.  But I hope in the next two or three months, we start to get a bit more going.

The Lois/ Clark relationship will, no doubt, be of some discussion as in this issue, there is absolutely no Lois & Clark, or even Lois & Superman.  This Lois is going to be interesting to watch for any number of reasons, and I look forward to seeing how DC and Pérez handle the character over the next year. I think the idea of Lois and management is intriguing and feels right for how we think of Lois an an overachiever, but then I wonder... isn't she really a reporter at heart? Anyway, not exactly a scandalous decision by DC. Just one I'm curious to see develop.

-I guess I'm getting used to the new costume, but it certainly does have a more "authoritarian" edge than the old suit
-anyone worried about a political bent to Superman will not find it here
-Lois has violet eyes, which I always like
-Jimmy is in the mix, and that's good, but I wish he'd get more panel-time

Does it work as a first issue?

That's a tough question.  I think so, as Pérez is not shy with the necessary exposition.  Its not an origin story, but more like the first look at a work-place-based TV show, trying to get you up to speed.  However, it doesn't do so with the usual tool of introducing a "new kid" to get them (and therefore the reader) acquainted with the setting and characters.  We get dropped some hints as to recent past events which I'm guessing dovetail into Action Comics, but there's nothing to really slow you down.  It might be asking a bit much for John or Jane Q. Public to forget that Lois is a busy-body reporter in the mode of Lois & Clark, but the how's and why's are covered quickly and efficiently.
I'll bring this up in a later post, but something superhero comics have obviously completely forgotten in the relaunch is that what makes superheroes cool and unique is not that they're surrounded by mutants and aliens and whatnot.  Its that they're a one-of-a-kind, often weird figure.  Superman didn't make a splash in 1938 because he was part of a menagerie, but because he was a superman hidden among men.  That's something this story gets right, and something I am afraid that almost every other title is going to get wrong.

I WANT a sprawling cast of Superman's co-workers.  I love the idea that this is something unique and special, and when people look up in the sky they have to question what they see, not that the sky is crawling with brawling supermen (see Waid's commentary by way of Kingdom Come).  Pérez is old school enough to know this is what works, and what makes these characters special.

In summary - I'm more impressed than I figured I'd be.  And I guess that's good. The writing and style were strong enough to convince me that of all the relaunch, DC has put more time and love into this concept than almost all else. Change is hard, but its necessary, and if they're asking for me to be onboard with the change, at least they're treating the book, the character and us Superman fans with something resembling respect. Actually quite excited for issue 2, I think.

There's going to be a wave of people who miss the point and talk about how Superman "is now trying to be cool" by updating, but those are the same people who would be making fun of Superman for not changing. In short, these are people who might like Red Hood and the Outlaws. We will just let them keep doing their thing.


*I admit, this name was the one thing that made me slap my forehead in this issue. That is not a name that would make it past marketing and we may well be stuck with it for a long, long time.
**Jamie and I were reading two different comics, and the one she was reading was longer-length $3.99 comic. She finished her comic a few minutes ahead of me. The problem isn't page count, its information bits per page.
Posted by The League at 9/28/2011 11:52:00 PM