Mr. Peppermint Merges with the Infinite 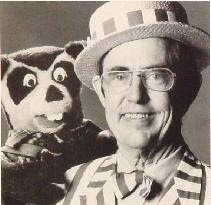 Mr. Peppermint was actually Mr. Jerry Haynes. And while he played the jovial, puppet be-friended Mr. Peppermint on TV, he was also the father of Gibby Haynes, frontman for The Butthole Surfers. A fact I have never really been able to wrap my head around.

When I was about 4 years old we moved from Michigan to Dallas, and its important to note a couple of things (a) we spent a lot of time in fantasy la-la land as kids, going to puppet shows, plays, movies, etc... and the KareBear was all about the magical land of make believe. I assume it kept us very quiet, and (b) I have only vague memories of Mr. Peppermint, but all of them are colored with candy-coated awesomeness.

Younger readers may not remember that local TV stations used to have a kid's club host, usually on the UHF channel. Sort of like how they would also have a late-night host. These sort of spun out into ideas that got picked up nationally like Bozo the Clown for morning programming and Elvira for late-night programming. On the morning shows, they'd host cartoons, maybe have a live audience that would play games, etc... *

But, honestly, I don't remember much about what was actually on Mr. Peppermint's show, Peppermint Place. I was 6 years old when we moved away.

I do recall it made a huge impact on me that my Ma, The KareBear, took us to see Mr. Peppermint when he did a show at the mall.  I had only seen one celebrity before, and that was some random guy dressed up as Darth Vader signing 8"x10" glossies at the JC Penny.  But Mr. Peppermint came out and talked to his puppets and he had the suit and cane and everything.

Part of why I've gone on and on about this is that:  well into college, I secretly really wanted to be a Kid's TV Show Host.  I'm totally not kidding.  I didn't yet have a character in mind, but I liked the Mr. Peppermint model of just being a genial guy in a colorful suit with puppets.  At the time, Austin just had this kind of loud lady named Kelly who would intro the cartoons, but she clearly didn't give a damn about Animaniacs or Batman.  And I figured if I could get the right angle, I would make the cartoon block way, way more fun.

I think I grew up with ideas about how things worked that were sort of stuck circa 1955, especially when it came to what made for good TV.  Other kids were watching The Cosby Show and I was watching Mr. Ed re-runs and Leave it to Beaver.  And I'm not unconvinced that a friendly guy on TV talking to kids isn't a better model than the hyper-kinetic mess that makes up most kids' programming these days.

Anyway, here's to Mr. Peppermint, Gibby's dad, and friends to kids in the greater DFW area for generations.

* I remember conversations in middle school about how Bozo's "Grand Prize Game" was f'ing IMPOSSIBLE - where you through ping pong balls into buckets as far away as ten feet.
Posted by The League at 9/26/2011 05:30:00 PM

Wow that's so funny that you mention the "Kids Club" format. I had never really thought about it but it was sort of weird that there were four teens lounging on bean bags giving continuity to the cavalcade of celluloid shown in the latch-key dead zone of before homework and after school. So weird, now that I think about it.

I know some cities hired kids to do that, but that wasn't the case in Austin, and I don't remember it from Houston.

I do remember talking to a friend in college from, I think, Midland, and talking about how how I thought I'd be better at kids club that Kelly, and she told me she'd hosted the kids club in Midland but thought it was kind of a dumb gig.